The Merriam-Webster dictionary defines opportunity as "a good chance for advancement or progress".

It defines genuine as "actual, real or true".

With rookie camp upon us and the start of the Flames main training camp a week away, a question on the minds of many fans and maybe even some of the club's prospects too is: Is there genuine opportunity for one or more rookies to make Calgary's opening roster? For those that played last year in the American Hockey League, is there an actual, real chance for advancement? Or, is that just lip service?

It's a fair question. With the recent signings of veteran NHLers Devin Setoguchi and Corey Potter, you are starting to run out of blank spaces when you mock up the club's potential 23-man opening roster.

But as you'll see, there may be more opportunity than you think.

First, we'll begin with what seems to be the most popular public sentiment these days and that is there's no longer space for guys like Johnny Gaudreau and Tyler Wotherspoon to make the hockey team.

If you count up all the veterans, one-way contracts and waiver-eligible players that are either on the roster already or coming to training camp on a tryout, you're at, or are nearly at the roster max of 23 players.

The 'opportunity half-empty' audience is probably envisioning an opening night roster that looks something like this. Not one rookie on the team. 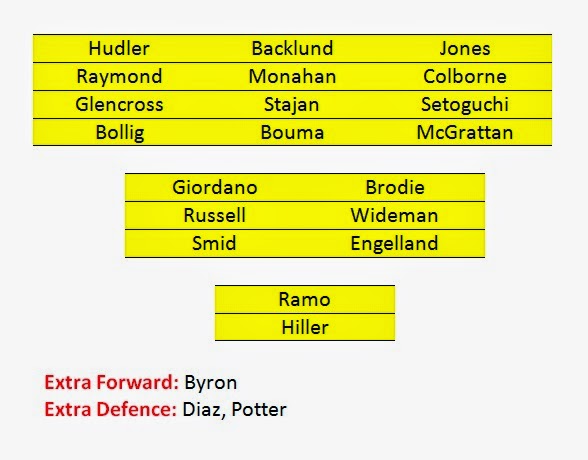 If the Flames opt to go with the more conventional seven defencemen, then you could assign Potter to Adirondack and potentially add a prospect as a 14th forward but does sitting in the press box qualify as genuine opportunity? And, it likely doesn't happen anyway as the Flames have stated and demonstrated before they'd rather their top prospects be playing big minutes in the AHL versus sitting in the press box in the NHL so a 22-man roster with a 13-7-2 split would be more plausible.

On the other hand, there is also a scenario -- less discussed, but that isn't all that far-fetched in which all the fretting and hand-wringing is for not and there could be an abundance of opportunity for Calgary's prospects this training camp.

When it comes to the Flames 2014-15 roster, here are three factors not to be overlooked, which could impact roster decisions when the final cuts are made in four weeks time.

1. Injuries - Let's face it, injuries happen, especially with the sacrifice-your-body style of play deployed by coach Bob Hartley. Calgary lost close to 290 man games to injury last year. Injuries can happen in preseason games, they can happen in practice. Last year, Mike Cammalleri was hurt to begin the year, Matt Stajan got hurt opening night. By the 10-game mark, David Jones, Lee Stempniak and Mark Giordano had also been hurt.

2. Waive/Demote/Release a Veteran - While Paul Byron and Devin Setoguchi both have to clear waivers to be sent to the AHL, that doesn't mean they won't be put on waivers and sent down if a couple Flames rookies step up this September and force their way onto the team.

Byron and Setoguchi would both be paid their NHL salary in the minors but making barely above the NHL minimum of $550,000, that's no deterrent either. Let's not forget the Flames have the NHL's lowest team payroll so they have the cash, no problem.

If you still have doubts Calgary would be willing to assign a veteran on a one-way contract to the minors, then you have a short memory. It was just last season that Shane O'Brien and his $2-million salary spent a majority of the year in the AHL. Even if the Flames were to ship both Setoguchi ($750,000) and Byron ($600,000) to Adirondack, the club would still be paying $650,000 less than they paid O'Brien to toil with the Heat last year.

As for the fear another team would claim Byron or Setoguchi on waivers, think about it. If one or both of these guys don't make Calgary's roster, it's hard to envision them being that hot of a commodity for other teams and even if they were claimed, do the Flames really care? Remember that Setoguchi was an unwanted UFA for 54 days this summer before finally signing with Calgary.

3. Trade - If a prospect or two does earn themselves a spot in Calgary's opening night line-up, don't think GM Brad Treliving won't start making phone calls and try to move out a veteran at that time. Curtis Glencross, as an example, is a pending UFA. Perhaps he becomes a candidate to move on. Maybe Calgary retains some salary and moves Dennis Wideman in order to find a top four spot for Tyler Wotherspoon. Jiri Hudler or David Jones are also veterans that could be dealt.

Factor in all these variables and if you're in the 'opportunity half-full' audience, it's not inconceivable to think that injuries will crop up to the usual suspects during September and the Flames opening night line-up against the Canucks on Oct. 8 could look something like this: 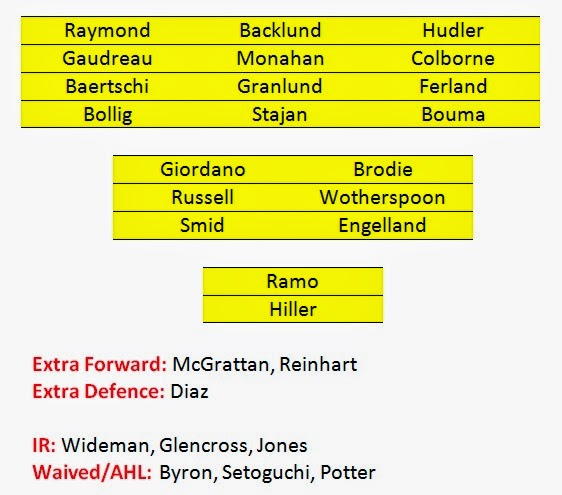 Now in reality, it's unlikely that the Flames line-up will look this extreme on opening night. I'm not convinced training camp and a handful of exhibition games is enough of a sample period for Sven Baertschi to prove he's turned around his game or for Michael Ferland to show he's ready, but could the roster look like this in December? Certainly.

By re-signing Byron and Mark Cundari, bringing in Setoguchi and Potter, inviting Raphael Diaz and Sheldon Brookbank to camp on tryouts, what the Flames have done is set themselves up with options while throwing down the gauntlet for the younger players -- you need to earn a spot, you're not going to be given one.

The Flames have cultivated themselves an identity and a culture that is based on rolling up the sleeves and working hard. It starts off the ice, it carries over into practice, and it is expected from the 1st minute to the 60th (or 65th) minute of every game, regardless of score. It goes against everything Hartley has instilled in this hockey club to start giving out roster spots to 20, 21, and 22-year-old kids.

Now is there validity to Treliving trying to resurrect Setoguchi's career? Yes. Is it possible that if a prospect outplays him in September, Setoguchi may still get the benefit and get the month of October and potentially November to try and turn his game around? Yes.

But rest assured, if one or two of Markus Granlund, Max Reinhart, Baertschi, Ferland, Corban Knight, Kenny Agostino, Wotherspoon, Bill Arnold, Patrick Sieloff or any of the club's prospects come out and dominate in September and show they are absolutely ready to play at the NHL level, then trust they'll be here very soon, even if it means going down to Adirondack for a month or two to begin this season but then being the first names called when bodies are needed come November or December.

And a little extra time spent marinating in the AHL will never hurt a player's development. If in doubt, see Gustav Nyquist, who spent parts of four seasons in the AHL before erupting for 28 goals in 57 games last year for the Detroit Red Wings.