A Different Kind of New Era in Flames Hockey: Wave Bye Bye to 19,289

It happened quietly and without any fanfare during this Calgary Flames five-game home-stand that just ended. It wasn't announced to fans at the games nor mentioned to media covering the games. But it seems a stretch of consecutive sell-out crowds at the Saddledome that dated back over 10 years is now over -- officially.

We all know the number -- 19,289. That figure has signified a sold-out crowd going back to the 2004 Stanley Cup playoffs.

It was actually the game last Saturday against Alex Ovechkin and the Washington Capitals that ended the run of 392 consecutive sell-outs (regular season plus playoffs), a stretch that began on February 13, 2004. The attendance that night against Washington, as noted on the official NHL game summary, was 19,095. That made it the first non-sell-out since Bob Hartley and the Atlanta Thrashers visited the Saddledome on Tuesday, February 10, 2004, before a crowd of 16,549.

After returning to that familiar 19,289 figure and legitimately, no doubt, against the always popular Montreal Canadiens on Tuesday, it was a different story once again last night with Nashville in town on Halloween. The attendance figure Friday against the Predators? 18,505. And it was quite evident there were a lot of people away at Halloween parties as the actual crowd was clearly even smaller than that.

Truth be told, there have been plenty of available seats for most Flames games for a few seasons now.

Call it the third deck, the upper deck, the nose bleeds, the Sport Chek Zone or by its catchy formal name of Press Level Seating as they were dubbed a few years back, it doesn't matter, there is no hiding from view the rows and rows of blue empty seats that have been visible up there lately. Every time I walk the catwalk to the press box or head to the bathroom, you see it plain as day.

However, thanks to the tickets being 'sold' to Sport Chek through a longstanding Sport Chek zone partnership with the Flames, the games have been announced as sold out from the team's perspective, even though the crowds have clearly not been at capacity and Sport Chek has been swallowing the unsold $30 tickets.


Can Gaudreau be Kiprusoff 2.0?

The ironic part about Calgary's sell-out stretch ending now is we're just beginning a new era in Flames hockey, which could be the most entertaining hockey this hockey club has played since the sell-out streak began over a decade ago.

Once again on Friday, uber-talented Johnny Gaudreau had fans on the edge of their seats with his on-ice wizardry. In the first period, it was dipsy-doodling around Predators defenceman Anton Volchenkov. Then in the third period as documented here in my game story for The Canadian Press, he set-up the tying goal, drew a penalty that led to the go-ahead goal, then scored the eventual game-winner on another nice individual effort -- and all of that happening in a span of four minutes. Man, this kid is fun to watch and at age 21 and only a dozen games into his NHL career, he is just getting started.

It's cliché to describe a player as 'worth the price of admission' but if there's one exception, Gaudreau is it. Seriously, how can this guy alone, not sell tickets... and I'm talking hundreds of tickets if not thousands of tickets. He is that entertaining.

If you recall, it was the arrival of Miikka Kiprusoff on November 16, 2003, which turned around the fortunes of a sagging organization a decade ago.

Attendance at the Saddledome on November 7, 2003 for a game against the Minnesota Wild, the last home game prior to the Kiprusoff trade, was a meager 13,839. 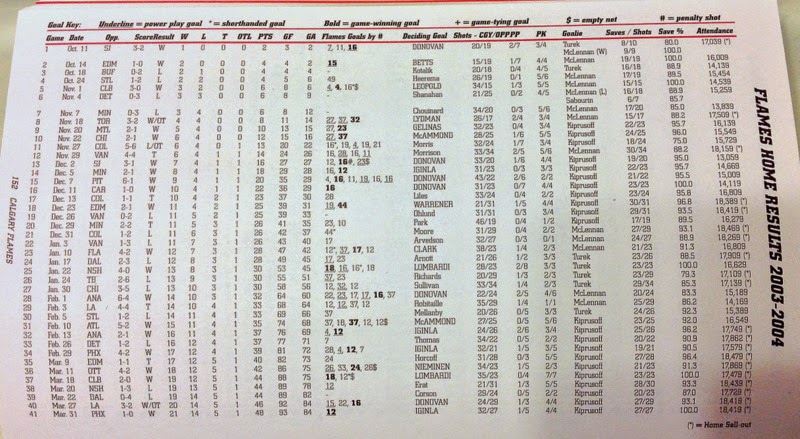 But Kiprusoff rejuvenated the hockey team and eventually the crowds also. Attendance began to increase over the course of that season as Kiprusoff captivated the city with his terrific play. In a year in which the sell-out number was actually a fluctuating number on a game-by-game basis -- it depended on how many seats the Flames made available for sale, the final 10 games of the regular season were all sold-out, which started the streak.

For the playoffs, the seating was increased to 19,289 and with playoff fever in the air and the Red Mile growing larger on a nightly basis, the games easily sold out and the team never had to look back for the next 10 years. Until now.


Must Market the Team's Talent

While this is a new era attendance-wise, it's also a new era prospect-wise and an exciting one at that. With the arrival of young prospects like Sean Monahan and Gaudreau and now Markus Granlund and Michael Ferland. With the emergence of a young TJ Brodie as an anchor on defence and the promise of Tyler Wotherspoon. With highly touted prospects like Sam Bennett and Emile Poirier perhaps only a year away, there are many reasons to be optimistic about the future of Calgary Flames hockey.

That's not to mention the exciting, easy-to-cheer for, work-your-tail-off style of play that Hartley has his underdog team playing.

But, we've also reached a point where just expecting people to flock back to the rink would be a mistake for the club. It's time for the sales and marketing folks to get down to business and find creative ways to get people back in the seats at the Dome. As they say, an empty seat doesn't buy any drinks, food, or Flames apparel.

I have no doubt that enthusiasm around the hockey club is high -- the talent in the pipeline is terrific, but the cold reality is people's disposable income is rarely at that same level as their interest level.

As well, with every game on television now, the comforts of the couch at home can be pretty appealing. The attraction of not having to drive anywhere, or pay anything to park, the appeal of $2 beers from the nearby bar fridge and that huge 60-inch high-definition television, it makes for a pretty cozy way to watch Johnny Hockey do his thing -- and on nights when he's creating magic, just hit rewind and watch him over and over and over again.

In regards to the lower bowl and the second level, there is loads of money in Calgary but is there enough to make the fifth highest average ticket price in the NHL, as determined recently in this article in Forbes magazine, affordable? We're about to find out.

Maybe it will take a return to the playoffs for the Flames to get back to legitimate sell-out crowds. Nothing beats the atmosphere of being at the Saddledome for a playoff game, case in point being when Calgary ended that seven-year playoff drought in 2004. Those third level seats were very, very hot commodities.

It's been five years removed from the playoffs for the current edition of the Flames so a similar scenario might, indeed, be unfolding right now.

The bottom line is this is a new era of Flames hockey for a couple different reasons -- on ice and off ice, and both of them will be interesting to monitor.