Fifty Days of 2015: Reflecting on the Calgary Flames Calendar Year so Far

According to the Chinese zodiac, 2015 is the year of the sheep. In that case, perhaps it's supposed to be pronounced Lance Baa-ma.

We're 50 days into the New Year and a case could be made that the peppy 24-year-old from Provost, Alberta, has been the Calgary Flames best player over these last seven weeks.

Going by the not very original but very fitting nickname of 'Boums', check out his resume since January 1:

Bouma has been doing a little bit of everything for the Flames and his little something Wednesday night was notching the clutch tying goal halfway through the third period -- and a beauty of a shot into the top corner too, as Calgary almost came back once again when trailing a game entering the third period, this time salvaging a point in a 3-2 overtime loss to Minnesota.

Calgary's third round pick in the 2008 NHL Draft has led the team to an 11-7-1 record since January 1, which has propelled the Flames into sole possession of second place in the Pacific Division with just 24 games remaining. That's home ice advantage if the playoffs began today. Unbelievable.

Fans are suddenly talking -- not just dreaming, about a very realistic possibility of returning to the Stanley Cup playoffs for the first time in six years, which is a shocking development considering back in September, most thought landing Connor McDavid was a far more likely possibility than the return of the Red Mile.


What Has Happened to Glencross?

For all the good that's going on right now with Bouma, the polar opposite is happening with Curtis Glencross.

Way down at the very bottom of the team's scoring, sharing the same rung on the points ladder as the likes of  Drew Shore (1 game), David Wolf (2 games) and Ladislav Smid (3 games) is Glencross, Calgary's most talked about pending unrestricted free agent.

While Glencross has missed nine games during this span with an injury, the 32-year-old veteran still has no points in 10 games in 2015. It's not like he can blame it all on being snake-bitten either. He's produced only nine shots on goal, that's an average of less than one per game.

Sure there are other variables at play, Bouma is playing with Mikael Backlund while Glencross has been skating lately with Josh Jooris as his centre, and opposition match-ups is another consideration. But just watching the two of them -- the old 'eye test', this is more than just a case of good situation versus bad situation.

Is the trade talk that has been swirling around Glencross affecting his play? Is this just a string of bad luck? He did have a couple of nice deflections from in front last night that Devan Dubnyk made good saves on but still, he's not having nearly the same impact on games that he used to have.

Maybe it's his many injuries the last few years catching up to him as he seems to have lost a step. We're just not watching the same guy that scored at close to a 30-goal/season clip from 2010-11 through 2012-13.

Here is a snapshot of the Flames player stats since January 1. It makes for some interesting reading. 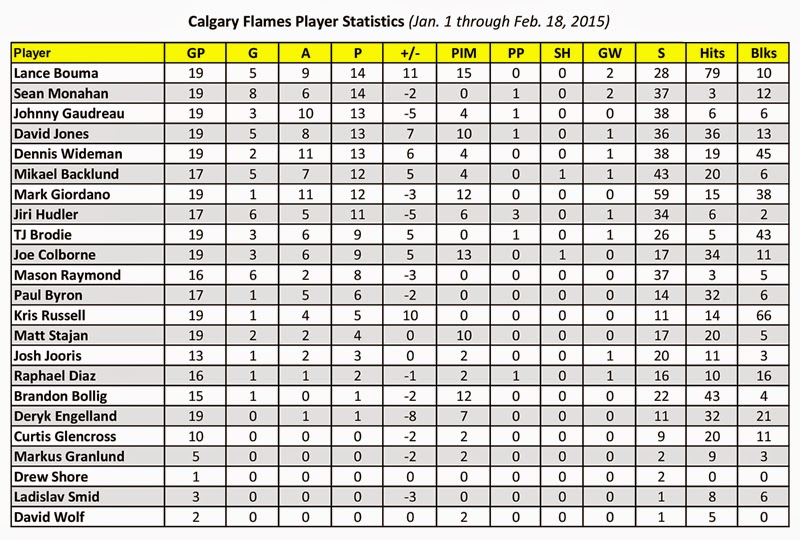 Three things that jumped out at me besides Bouma and Glencross:

Suddenly in the Western Conference standings, the Flames find themselves just as close to the reeling Anaheim Ducks in front of them as they are to the Colorado Avalanche behind them. The separation is nine points in both instances.

With the Ducks banged up and not getting good goaltending right now in the absence of Frederik Andersen, one of Anaheim's handful of injured players, Calgary could climb within seven points of the Pacific Division leaders with a regulation time victory on Friday night. Hard to believe.

Catching them will be nearly impossible but there's something to be said about looking out the front windshield at the teams ahead of you at this time of year instead of staring at the rear-view mirror.