Final Countdown: Flames Improbable Playoff Chase Will Come Down to the Wire

Sixteen days to go, one point out of a playoff spot.

So close. So damn close. So tantalizingly, excruciatingly, mouth-wateringly close.

It's like one of those dreams where you're having a fantastic time but then your eyes slowly begin to open and you see your bedroom walls, the clothes piled on your dresser, the angry stare of your alarm clock and you realize you were dreaming but you don't want it to end, you don't want to wake up, it's not time yet. You desperately clench your eyes shut again in a futile attempt to drift back into dream mode.

This wasn't how it was supposed to happen.

If you look down the tracks, you can still a glimmer of the train leaving town just two years ago with Jarome Iginla, Alex Tanguay, Jay Bouwmeester and Miikka Kiprusoff on board.

How did the Calgary Flames get to this strange but wonderful place? This place where scoreboard-watching can spark so much fury, where their own games are so nerve-wracking, where terms like 'draft lottery', 'McEichel' and 'tanking' are absent from the vocabulary.


Surviving the Loss of Giordano

It was the most damaging empty-net goal in franchise history and it occurred on February 25. TJ Brodie sails the puck 180 feet down the ice at the Prudential Center to clinch a 3-1 victory over the New Jersey Devils.

Picking up an assist, but now wreathing in pain way back behind the Calgary net is Mark Giordano, the heart and soul of this hockey club.

And it would turn out to be everybody's worst nightmare. A torn biceps tendon that would require surgery and a 4-5 month recovery. His season was done and surely this was the case for the Flames season too. On a team that had overachieved for five months, you don't survive the removal of a legitimate Norris candidate as top defenceman and a potential Hart candidate as the player judged most valuable to his team.

This is the type of devastating loss you just don't overcome. This was an injury that a team doesn't just shrug off. This isn't fiction, this is real life. It's cold, it's harsh but it's reality. This guy was the heart of the Flames, the captain, the Mr. Everything -- shut-down defenceman, the igniter of the offence. He was Superman without the cape.

When the post-Giordano portion of the season began on February 27 with a road game against the New York Islanders, here is snapshot of how the Western Conference standings looked. At that time, Calgary was on the outside looking in.

The Flames were even in points with Los Angeles but were behind because they had played one additional game. Calgary trailed the second wildcard spot by one point -- even in games with Minnesota. 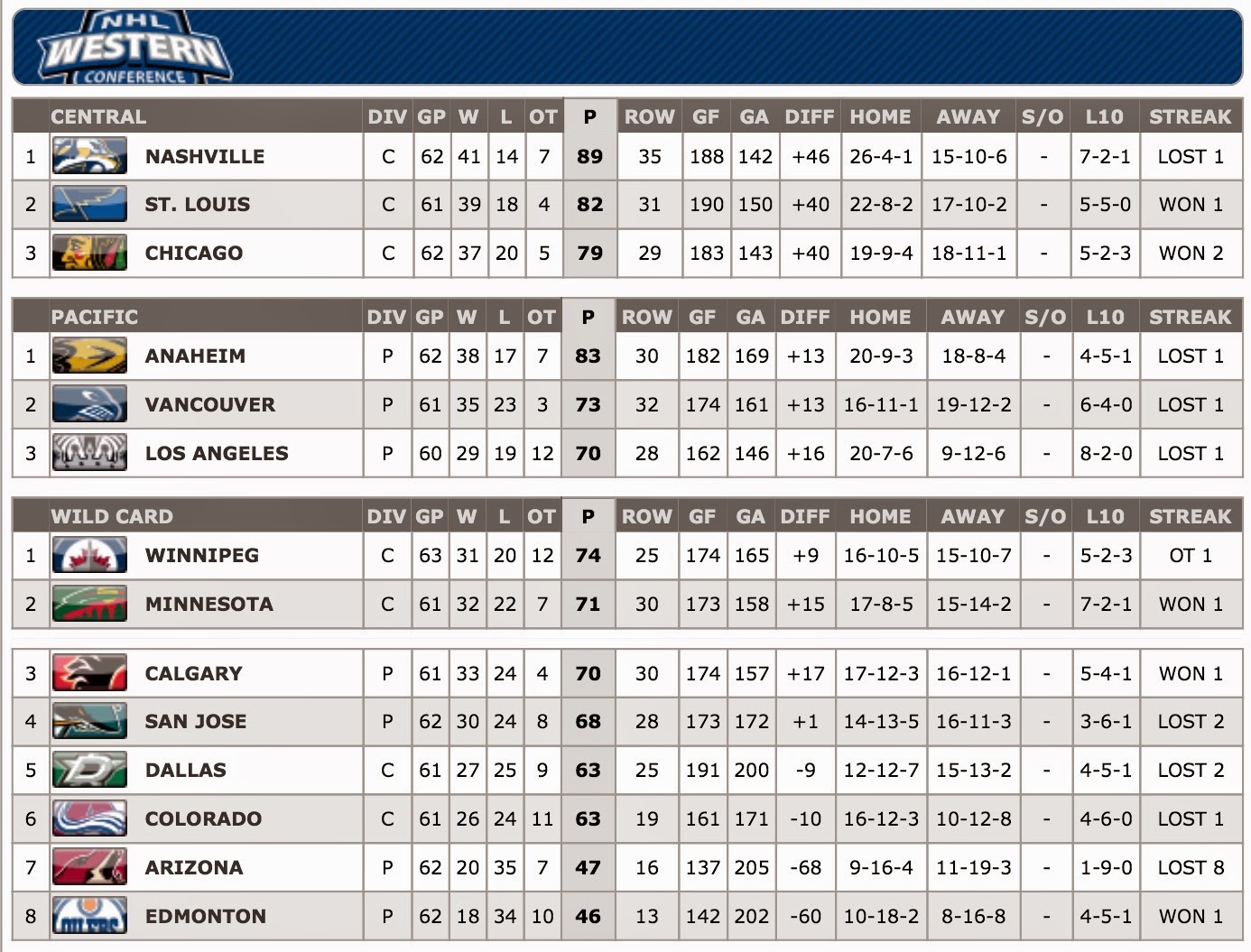 In the first game without their captain, it took until 21 seconds remaining in the game to finally score a goal in a 2-1 setback to the New York Islanders. It was a predictable result although not as lopsided as many feared in missing Giordano's reliable 25 minutes of ice time.

Then, the unthinkable happened.

Three straight road victories in Philadelphia, Boston and Detroit -- three road barns where victories are earned, not given. Then, a stirring four-goal third period comeback in Ottawa to pick up a loser point against the Senators. Then, two more wins against Anaheim and Toronto upon returning home.

Fast forward to today, one month later, and the Flames -- despite going an impressive 7-3-3 without their best player, find themselves nearly in the identical spot.

They still trail the Kings for third place in the Pacific but by one point now -- and even in games. Calgary sits three points back of the second wildcard but they have a game in hand.

Here's a look at the West heading into Friday's games. 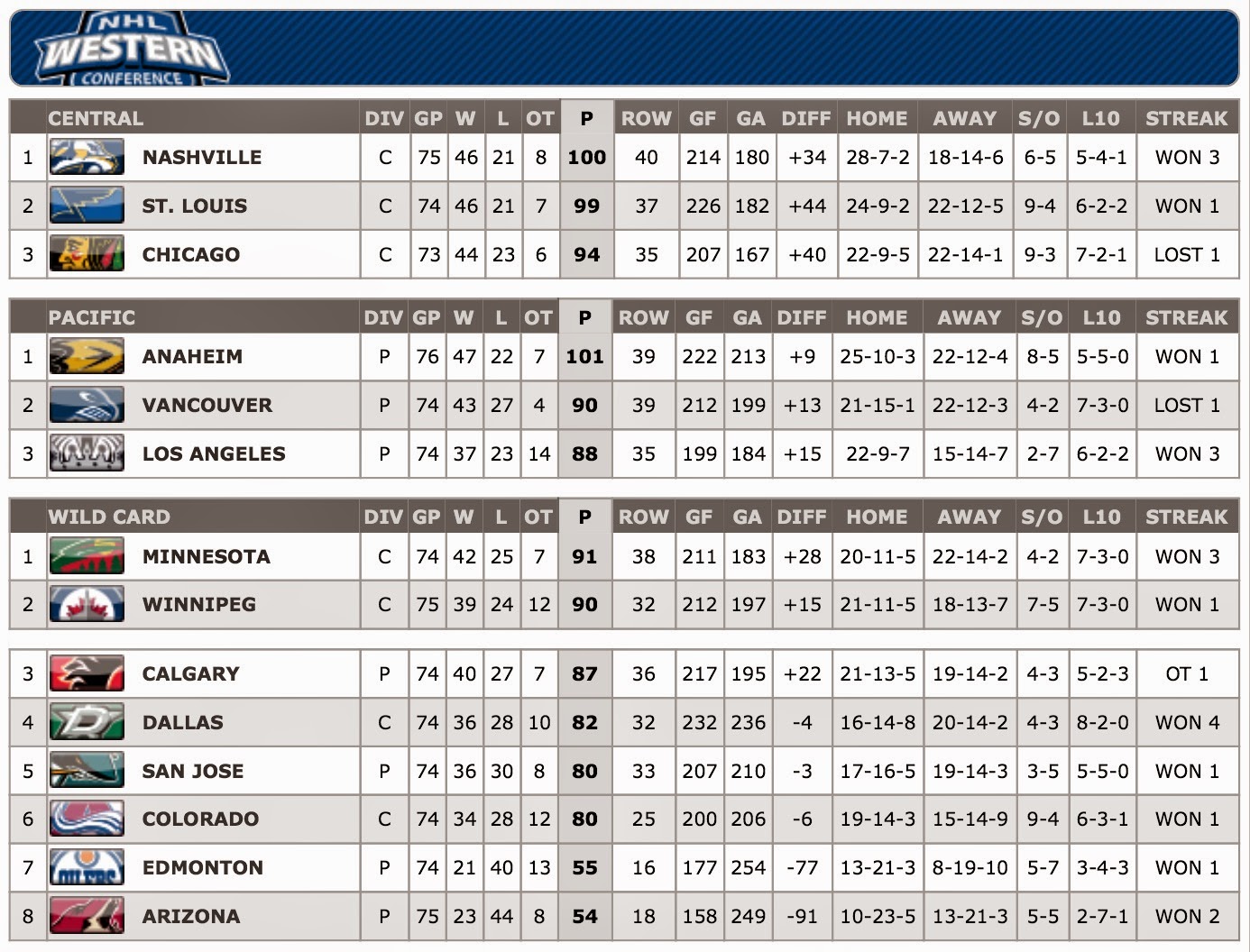 You can't blame the Flames for feeling a bit chagrined today. After all, you could not have expected them to fare any better in Giordano's absence yet they're stuck in nearly the identical situation.

We're talking just three regulation-time losses in 13 games and two of those by a single goal. With the twice-released-this-year David Schlemko in the line-up in place of Giordano and third pairing inhabitant Deryk Engelland averaging 19:08 in average ice time per night instead of his usual 12:25. What they've done in going 7-3-3 is in all practicality the equivalent of running the table. Yet, cruelly they've somehow lost ground on nearly everybody else during that time.

Record While Giordano Has Been Out:


How good has this group of five West bubble teams been playing lately? Really, really good.

If you look at this upcoming road trip for the Flames, it looks harrowing. The red-hot Wild to begin and Devan Dubnyk's 33rd straight start for Minnesota. I'd have to look it up but I believe he's also going for his 33rd consecutive shutout. Or, so it seems.

Then Calgary heads into Nashville, who most of the season has owned the best home record in the NHL. Next up is Dallas, who just beat you and has won seven of their last eight. Lastly, you get the Blues, who ran over the Flames like a freight train 10 days ago.

The modus operandi if you're the Flames is to somehow find a way to split these first four games. If they can get four points of those four stops, then win the next two in Edmonton and home to Arizona, then they have a chance. Calgary would be sitting at 95 points heading into the much-anticipated final two games of the season -- home to Los Angeles on Thursday, April 9, and a Saturday matinee at the noisy MTS Centre in Winnipeg to wrap up the year.

Winning two of the first four and three games in total is the only way to look at this trip because if you start off thinking you have to win all five games, you're going to be so afraid to make a mistake that it would be like paralysis.

The good news for Calgary is they've had a superb year away from home. This is the fifth road trip of five games or longer and they've returned home above .500 each time.

That's a combined record 15-7-1. Speaking of playing at a President's Trophy-worthy clip, that record extrapolated over 82 games breaks down to 111 points, two back of the New York Rangers pace.

As we sit here today, two weeks and two days from the finish line, here is my very subjective (and very non-Sports Club Stats) look at the percentage chance for each of the five bubble teams that come the end of the season, they will be the team that ends up missing out.

Nobody expected the Flames to make the playoffs, but now they're so close they can taste it. As one can glean from the intensity of the scoreboard-watching going on right now, Calgary is a playoffs-starved city desperate to see it happen.

The prevailing attitude on the streets seems to be give me one round, even if it's a four-game sweep, I just want to taste it again, the rivalry-building emotion of playing the same team over and over again, the dissecting of every coaching move, intently scrutinizing the games. You've teased me all year, please don't let me down now.

The consolation if it should not pan out is this push has a way different feel from those older fringe Flames teams in past years. This team is young and only going to get better. Future building blocks like Sean Monahan, Johnny Gaudreau and TJ Brodie are gaining invaluable experience right now that will only help them next year and beyond.

Speaking of next season, while some point to 'lucky' teams of the past like the Avalanche and Leafs and assume a giant drop-off is Calgary's destiny next year, they seem to conveniently overlook the fact more young talent is on the way in the form of Sam Bennett, Emile Poirier and surely Tyler Wotherspoon will be ripe by then.

If the Flames don't make the playoffs, will there be disappointment in Flames nation? There better be. As I always told my son's hockey teams when I was coaching minor hockey. If you're not disappointed when you lose, then you haven't invested enough emotionally to really enjoy and cherish the wins.