Introducing 'The Schlemko'. Flames Win Again and in the Most Calgary Way Imaginable 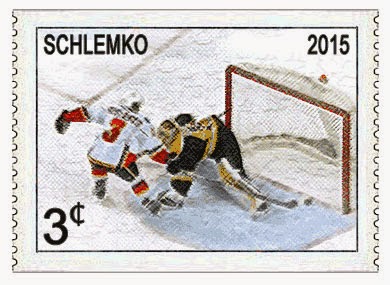 You could not dream up a more apropos thing to happen to add an exclamation mark to the Flames magical 2014-15 season than what unfolded on Thursday evening at the TD Garden in Boston.

David Schlemko, playing his first hockey game since January 31. Playing his first game since Calgary plucked him off waivers -- the NHL version of the 'free' box at a garage sale. Coming at the end of a game in which he played only seven minutes, the third-lowest ice time in his 213 career games. On a night in which his butt had been stapled to the Flames bench since late in the second period for all but a minuscule 1:55 in third period ice time.

There he was, wearing No. 3 and presumably someone with all the offensive panache you might expect from that jersey number's former inhabitant Ladislav Smid, inexplicably getting the call from Bob Hartley in round eight of a shootout against the Bruins.

That's right, Schlemko had just been sent over the boards to shoot for the Flames. This is the same Schlemko, who has scored all of one NHL goal in each of the last four seasons.

Seven players had already gone, sure. But not yet getting the tap on the shoulder: Mikael Backlund -- seven goals, Lance Bouma -- 12 goals, TJ Brodie -- 10 goals, Dennis Wideman -- 12 goals. Oh, did I mention Emile Poirier? The 20-year-old first round pick only scored 53 goals last season between the AHL and QMJHL.

If you knew in advance Schlemko was going to go out there and try and impersonate Peter Forsberg from the 1994 Winter Olympics, you would have expected the same outcome as if you were at a karaoke bar and your drunk girlfriend went on stage to sing 'I Will Always Love You' by Whitney Houston.


First, he clinches the win, a massive two points on a night in which everyone around Calgary in the Western Conference playoff race was also picking up points, then came the best part. Schlemko nonchalantly skates back to the jubilant Flames bench showing about as much emotion as someone, who just took the garbage bin out to the curb and was heading back into the house.

Now, they do say celebrate like you've been there before. And, he has. Schlemko is two-for-two in his shootout career -- both game-deciding goals. With Arizona, he also scored the deciding goal on April 20, 2013, against Corey Crawford at the United Center. Mind you, it came on a different and less spectacular move.

But seriously, did that really just happen?

To say Twitter blew up after that goal would be an understatement. In Calgary specifically, it had to be right up there with Jarome Iginla's pass to Sidney Crosby on Feb. 28, 2010.

Well, welcome to the team, Mr. Schlemko, why don't you sit in the front row on the charter to Detroit. In fact, why don't you grab a seat in the cockpit. Have you ever flown an airplane before? Never mind, I wouldn't doubt you for a second.

In a tough trio of barns -- Long Island, Philadelphia and Boston, the Flames have won two of their first three games without the services of their captain and best player Mark Giordano.

I'd call it shocking, but seems it's time to strike that word from our vocabulary given all that Calgary has accomplished not just this week, but all season.

Lucky at times? Sure.

In a playoff spot? Somehow.

There is still a long way to go and if I was an odds maker in Las Vegas, the chances of the Flames making the playoffs  still remain remote. I'd say one-in-four as a guess.

But from all we've seen from this resilient, resourceful, never-say-die hockey club, I wouldn't bet against them. No way.