In a content feature I call Eight From 80 Feet, I share eight thoughts on the current goings-on with the Calgary Flames. This special edition is dedicated to the huge trade on Friday pulled off by GM Brad Treliving in acquiring Dougie Hamilton from the Boston Bruins in exchange for three draft picks. 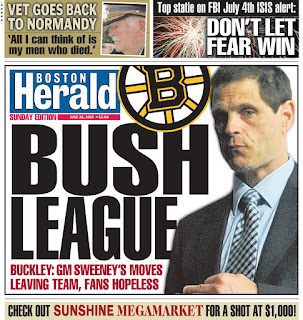 1. Net Outcome: How to View the Trade

Treliving has always referred to the extra picks he picked up in the Sven Baertschi (for a second round pick) and Curtis Glencross (for a second and a third round pick) trades as "currency" and he spent two-thirds of that extra money to add Hamilton.

If you step back and factor in those two deals, you can essentially view Friday's trade like this.


Flames trade disgruntled LW Sven Baertschi, who said he wasn't going to re-sign with Calgary after this season, pending UFA LW Curtis Glencross, and a 2015 first round draft pick in exchange for D Dougie Hamilton and a 2015 third round draft pick.


If you were undecided on the Hamilton trade before, now how do you view it? If you liked it already, now you must really like it.

Now I said "essentially" because in such a deal, Calgary would still have their own pick at No. 45 on Saturday. Instead, that pick was moved and the second round pick they retained was No. 53, which came from Vancouver. But you get the point and viewed that way, it's hard to evaluate the trade as anything but a massive win for the Flames. Instead of hoping to get a player at 15 that will one day develop into a NHL star, they acquire an established but still very young guy that's well on his way.

Everybody knows that defence is the position of the least depth -- by far -- for the Flames organizationally. When Mark Giordano suffered his season-ending injury last February, we saw that play out. Deryk Engelland was elevated to the top four and while he performed admirably, it hurt TJ Brodie. With the third pairing not trusted and barely playing, the big minutes forced upon Brodie, Wideman and Kris Russell every night wore them down as the playoffs went on.

Calgary's success last year was very much a by-product of how active their blue-line was in the exciting, entertaining and high tempo style of play coach Bob Hartley had his team playing. The engine of the Flames surprisingly potent offence was the defence. In addition to being great puck distributors, they continually jumped up into the play to create an odd-man rush, or were the second wave of attack coming late. However, as they wore down, you saw them play more conservatively and with Brodie taking less chances while paired with Engelland, it sapped their ability to play the same dynamic game they had played earlier in the season and that hurt them in the playoffs.

To be able to add in a top notch blue-liner like Hamilton without surrendering anyone off the roster, a guy who jumps right into the top four (or even top three), is a massive upgrade.

Now maybe this means Dennis Wideman will get traded. That definitely could happen. That said, then you're right back where you were last season. Instead, by inserting Hamilton and shuffling people down, Calgary's defence strengthens significantly. Yesterday, ESPN senior NHL writer Craig Custance tweeted, "With the addition of Dougie Hamilton, one NHL head coach said he thinks Flames now have best defense in the West." Well, how about that.

If I had to take a guess today at how the pairings might look in October, one possibility is this:


While that keeps the top pairing from last year intact, it does leave an all-righty third pairing and you wonder the last time Wideman (or Engelland) had to play the left side.

Alternately as a few of you pointed out to me (the first being @JustinBeatty777), one could flip-flop Brodie and Hamilton and flip-flop Russell and Wideman, which gives you three more well-rounded groupings:


Either way, that's nice depth and should it remain that way, Calgary would be the only NHL team (as of right now, anyway) in which the top six D are all Canadians.

In the NHL, right-hand shooting defencemen are at a premium. Of 307 defencemen to appear in an NHL game last season, 191 shot left.

The Flames were actually not bad off in this area last year with Wideman, Engelland and Raphael Diaz all fitting that description among the regular blue-liners. However, Diaz is a pending UFA and it seems doubtful now that he'll back. Seldom-used Corey Potter was also a right shot.

If you look at the other blue-line prospects in the organization when the 2014-15 season concluded (so excluding players signed since or selected in 2015 draft), there were a dozen of them and only one shoots right -- John Ramage, who doesn't appear to have an NHL future. Tyler Wotherspoon, Ryan Culkin, Brandon Hickey and Keegan Kanzig to name just a few, all of them are lefties.

Listed at 6-foot-5 and 212 pounds, Hamilton brings size to the Flames blue-line that is coveted and something they haven't had an abundance of over the years. In fact, only six defencemen that tall or taller have played for Calgary in the last 35 years and none of them had much of an impact:

Even if you look at the list of 6-foot-4 d-men, there are only a few of note in Jay Bouwmeester, Cory Sarich, Mike Commodore and Charlie Bourgeois if you go way, way back. The rest: Brett Carson, Adam Pardy, Steve Smith, Glen Featherstone, Brad Miller, Brian Glynn and Pat Ribble.

There was also an immediate need to add some size to the blue-line. The two tallest players last year were 6-foot-3 Ladislav Smid and Potter. Smid's future seems cloudy after suffering a major neck injury. Potter, a pending UFA, is in all likelihood gone after dressing for just six games for Calgary last year.

On Friday afternoon, the Flames set up a conference call to give media the opportunity to speak with Hamilton. As the call went on, I had flashbacks to Jay Bouwmeester as that's who Hamilton sounded like. Charismatic? Not so much. Gregarious? Wasn't my first impression. Is the Twitter handle @BoringHamilton available? (Thinking of you @HudlersShoes guy)

Now, it's entirely not fair to judge that side of him in a limited sample like that. After all, he's a 22 year old kid that just had his hockey world rocked. But early indications would be don't expect the second coming of Craig Conroy, or even Jiri Hudler for that matter. But that's more of a scribe's minor quibble than a concern of the team or fans, where performance is top priority.

Also, both are more known for their offence than their physicality. In Boston on a per-game basis, Hamilton (106 hits) ranked sixth in hits of the seven Bruins regular defencemen, ahead of only Torey Krug. But that's still quite a bit better than Bouwmeester (42 hits) last year. Hamilton also ranked sixth out of seven among Boston blue-liners in blocked shots with 53. Considering Russell led the world with 283 blocked shots, it makes a Hamilton-Russell pairing intriguing.

We heard ad nauseum last year how the Flames were one of the worst puck possession teams in the league. One of the main storylines all season was how often they would get outplayed and outshot yet somehow find a way to win a game, often coming back in the third period to do so.

While I firmly believe there's more to it and Calgary was a better team then they were being given credit for, it doesn't change the fact that in the long run, chasing the puck far more often than you have the puck is not conducive to long-term success and Treliving recognizes that and addressed that in his end-of-season address.

"Need to spend more time in the offensize zone and that's holding on to pucks, protecting pucks," said Treliving. "Defencemen can play 27 minutes if 10 of those minutes are standing at the offensize blue-line and not defending behind your goal line."

He added that only good things happen from more puck possession.

"Being a team that can hold onto pucks, play more time in the offensive zone, obviously limits the chances you're going to give up and will create more offence."

An advanced stat that isn't new but the NHL introduced into the mainstream last year was shot attempts (aka Corsi) and expressed as a percentage (SAT%), it is a ratio of the quantity of shot attempts the team generates versus gives up when a particular player is on the ice.

Playing with Zdeno Chara certainly didn't hurt Hamilton but the analytics community is very high on Hamilton and considering how down they were on the Flames all year, you can take that as a good sign.

Where Hamilton slots in age-wise -- two months older than Johnny Gaudreau and two months younger than Markus Granlund, also paints a very favourable picture of what's to come for the Flames.

Here's a look at the young foundation and (potential) core pieces of the Flames and their ages as of Oct. 1, 2015. Listed youngest to oldest, Hamilton falls right in the middle:

It's safe to say that the recently vacated No. 27 -- Sven Baertschi's old number, will become Hamilton's new number pronto. After all, it's the number he wore in Boston and is also the number he wore throughout his time in Niagara in the OHL.

Perhaps the only players saddened by the Hamilton addition -- and obviously I say this tongue-in-cheek, are Micheal Ferland and Emile Poirier, who also wore No. 27 in junior. Sorry guys, suck it up. When the time comes for them to graduate from training camp numbers -- and for Ferland that should be this September, you'll have to try out something else.

The Flames went to Florida prepared to make nine picks. They ended up making only five. However, they came back a much better team and a much deeper organization with Hamilton the headline acquisition.

Calgary has only drafted six defencemen in the first round ever with Dion Phaneuf the highest at No. 9. The others were Derek Morris (13th), Al MacInnis (15th), Chris Biotti (17th), Denis Gauthier (20th) and Tim Erixon (23rd). Hamilton was also a first round pick, selected ninth overall in 2011.

While Hamilton wasn't a Flames pick, if he plays in Calgary for the next decade as could very well happen and he has the success most hockey pundits expect, he'll always be known as one of Calgary's great pick-ups at the draft.