Smiling Brandon Hickey: Genuinely Enjoys Playing the Game and is Damn Good Too

You don't need to know his number. A name bar isn't necessary either. 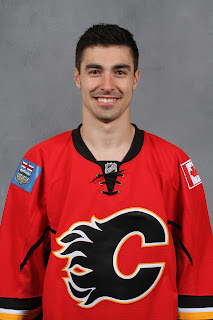 Even if you've never seen Brandon Hickey play hockey before, picking out the Flames defence prospect on the ice is easy. Just look for the guy with the big smile.

"I believe if you're coming to the rink and you're not having fun, you shouldn't be at the rink," says Hickey, the native of Leduc, Alberta.

Good skater, smart hockey sense, assertive defensively, smooth passer. There are a lot of attributes that stand out with Hickey. But for me, one of the qualities most noticeable at Flames development camp in early July was just how much he genuinely enjoys being on the ice.

"If you can joke around a little bit and smile as you're skating around, it makes it a little bit easier," he says.

In one particular drill, they were practicing stick positioning and then rubbing guys out along the sideboards. In Hickey's group were Hunter Smith, Keegan Kanzig, Austin Caroll and Patrick Sieloff. All solidly built dudes that spend more time around the barbecue than the salad bar. Yet Hickey, 6-foot-2 but only 180 pounds, was right in there, laying the hits, absorbing the hits and having a fun time with it.

"As you advance in levels of hockey, everyone's going to all of a sudden be a little bit bigger, a little bit stronger. a little bit faster. I think the college game has helped me prepare for this," says Hickey.

When discussing Calgary's top defence prospects, you can't have the conversation without mentioning Hickey. It was only 15 months ago that he was selected in the third round, 64th overall, in the 2014 NHL Draft. Already you get the sense he might turn out to be a steal.

The 19-year-old just completed his first year of NCAA hockey at Boston University where as a teammate of Jack Eichel, he played an integral role in helping the Terriers reach the NCAA championship game, which they lost 2-1 to Providence College.

"As the season progressed and I started to make strides in my game, I saw coach (David) Quinn and coach (Steve) Greeley have a lot of confidence in me," says Hickey, who was 6-11-17 in 41 games.

Having the impact he had and getting the ice time he logged as a freshman is pretty rare when you're at a top college like B.U.

"I wasn't really expecting to play that much but pleasantly surprised I guess," Hickey says.

Before he gets to his sophomore year, however, Hickey will be attending Hockey Canada's World Junior orientation camp at WinSport starting on Saturday. The camp runs August 1-6 and also includes four exhibition games -- two each against the Czechs and the Russians.


Getting the Call to Attend World Junior Camp

Maybe it's because he's such an easy-going, friendly and engaging guy -- look out Craig Conroy and Joe Colborne -- but there's one thing you should know about Hickey, he's not afraid to call back strangers who leave him vague messages.

For example, let's go back six weeks to June 22.

There he is on B.U. campus, just emerging from finance class when he checks his phone and sees that he had a missed call. He notices there's also a text message from a phone number he doesn't recognize that simply says, "Call me ASAP." No name. Nothing.

He promptly dials up the mystery caller and answering the phone at the other end is Ryan Jankowski, Hockey Canada Director of Player Personnel.

"He's like, 'Brandon, how's it going? I just wanted to let you know you're invited to Team Canada's summer camp and I was like, 'Sweet,'" recalls Hickey. "It's pretty special. You always dream about getting that invite as a little kid so just being able to go to the camp is pretty cool."

Of the 13 defencemen attending the camp, Hickey is one of only two that are not playing major junior in Canada. While that means he won't be playing right under the microscope of Hockey Canada's key decision-makers, he's not worried as they found him last year, no problem.

"I hoped I was on their radar but you never really know until they reach out and contact you. Hockey Canada does all the research, they watch a lot of players. So I was pretty pumped to get that phone call," Hickey says.

He says he'll know some of the guys he'll be going head-to-head with.

"I grew up with Haydn Fleury so I know him really well. I think it's pretty cool that we're both going to the same camp as we both played in Leduc. I've also played with Joe Hicketts before," says Hickey. "I've played with a lot of the guys on the team or played against them so it will be pretty cool to see them at camp now."


Playing for Canada Would be Special

Make no mistake, heading over to Finland to play for his country this Christmas would be pretty special. Hickey says that event was always ritual viewing for him, his parents and his younger brother.

"Every Christmas, we would always sit down and watch every single game. It's pretty huge in our household," he says. "I remember that one game against the Russians where Jordan Eberle tied it up late and then they won it in a shootout. I remember just sitting on the couch with dad, my brother and my dad's good buddy. It was feeling like 'oh, they're going to lose' and then all-of-a-sudden they tied it up and then they won it. That was pretty surreal."

To ensure he got himself ready for the U20 camp, Hickey wasn't going to let a little family vacation to Penticton get in the way of his conditioning and preparation.

"When I'm in B.C., I'll be working out and running hills and stuff. I don't want to get out of shape. It's like a vacation where I'll be somewhere warm, working out, but then I get to relax afterwards too," said Hickey back in early July. "Right down by the cabin we always rent, there's a big, big hill so I'll sprint up it a few times a day. I'll bring a net, some sticks, some pucks, and get some shooting in while I'm down there."

Who knows what the future holds for Hickey, who after a year of taking General Studies courses will turn his focus to Business in his second year of university.

A legitimate question is whether he will make it past the halfway point in his schooling. If he keeps progressing like he did in year one, there could very well be a temptation to leave school a couple years early and turn pro.

Hickey says he has no master plan in mind for his career path at this point and that he is just going to take it as it comes.

"I'm just going to go into this year and do everything I can to have an even better season than last year and progress the same way as from the start of my freshman year to the end of my freshman year," says Hickey. "I'm just taking it all in stride. I don't want to plan too far ahead but you always have to be prepared for anything."


Keeping an Eye on the Flames

Meanwhile, he'll continue to keep a close eye on the Flames, just like he did last year.

"I checked on them quite a bit," says Hickey. "I wanted to see how they were progressing, how the season was going with all the rookies."

He says he can definitely see himself fitting into the Flames mould for what what they want in a defenceman.

"They led the NHL in blocked shots last year and that style of game really suits me -- defend hard, skate fast and block shots," says Hickey, who led all Hockey East players over the course of the 22-game conference schedule with 49 blocked shots.

He says the dynamic way the Flames defence are constantly transitioning up the ice and then back again is also in line with how he likes to play.

"That's a great fit as well. They're always pushing their defencemen to get up into the rush," says Hickey. "We watched some video on how the defence plays a 2-on-1 against and then right away is ready to get back into the rush. That really suits my game also."

Defence depth was a well-documented area of weakness for the Flames not that long ago. But after a big trade, a couple signings, a productive draft and with the steady improvement from young prospects like Hickey, a cloudy future has quickly turned into bright blue skies.

And when Hickey arrives in town two, three, four years down the road, you sure get the sense he is going to be one of those rays of sunshine, who will be a fan favourite.