Mighty Fine: Big Night From Calgary's Kids Shows the Future is Bright and so is the Current

At an average age of 20 years and 11 months, the forward trio of Johnny Gaudreau, Sean Monahan and Sam Bennett represent the Flames future.

But they demonstrated on Saturday night in Calgary's thrilling 5-2 victory over the Pittsburgh Penguins that they are also an integral part of the Flames current.

On assignment for The Canadian Press, here is my game story that includes post-game player reaction on Calgary's best effort of the season. Posted to Sportsnet's website, game highlights including some must-see goals can be watched or re-watched also. 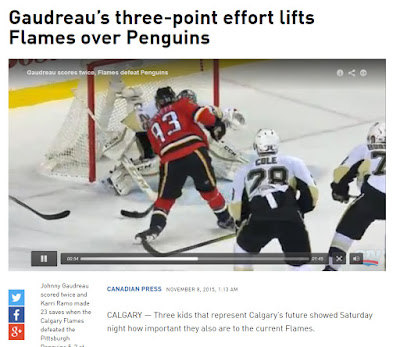 However, there was way, way more going on Saturday night than I had space to include in the above recap.

Here are some additional player comments, stats and some context to the gaudy numbers being put up by Calgary's young stars.

No sophomore slump here, apparently, for the Flames crafty 22-year-old star. Gaudreau's three-point night moves him into pretty elite company near the top of the NHL's scoring race.


Looking at the three established stars ahead of him, Seguin turns 24 in January, Benn and Kane are both 26. Gaudreau just turned 22 in August.

The area where Gaudreau excels is his playmaking and that's reinforced in his high ratio of first assists. Eleven of his 13 helpers this year have been the primary assist, the last play/set-up that leads to a goal being scored. In this category, he is alone atop the NHL.


Gaudreau says the team's goal production is coming around because they are playing smarter hockey.

"We didn’t start out the way we wanted to but we’ve been working hard in practices and trying to figure out what we’ve been doing wrong," Gaudreau said. "We’ve been limiting our turnovers, just playing a lot better defensively, which is leading to more offence. I think that’s what’s happening right now.”


Bennett Has Found His Groove

You got the sense when Bennett finally broke through and scored his first goal of the season in Ottawa a couple weeks ago that he was going to take off and boy has he ever.

In the six games since, he's piled up eight points (3 goals, 5 assists) making him not only the top scoring rookie of late, but one of the the hottest players in the entire NHL.

His goal on Saturday in which he turned poor Ian Cole inside out, what a scintillating effort. It was the goal that everybody was talking about after the game.

"Bennie is the jack-in-the-box that's bouncing all over the place and skating like a devil," said Hartley. "Looking at the plays that he made. On the first goal, great backhand pass to Colby, and what about his one-on-one effort on his goal. That's highlight-reel and I think Bennie will score quite a few more like this."

Bennett was nonchalant about the goal, as if that kind of thing is routine. Flames fans can only hope.

“It felt good. It’s always nice when you can get goals like that,” he said. "Once I made the first move, the next thing I knew I was one-on-one with Fleury. I just made a move and I’m happy it went in.”

It's interesting although not necessarily surprising that his first NHL season included a transition period at the start, followed by a gradual ascent and now a fast ramp-up. In fact, the start to Bennett's season has very much mirrored the start to Gaudreau's rookie season a year ago.

Bennett's strong play recently has thrust himself right back into the conversation for the Calder for the NHL rookie of the year. This is a hot topic now and will remain that the rest of the season with Connor McDavid out for at least a couple months with a broken collarbone.

Bennett says he's settling in and feeling much better with the puck now.

“I think the main thing is confidence. I think the whole team here, all the players and the coaching staff, have really helped me with that," said Bennett.  "I’m just feeling more and more confident as the games go on.”

Meanwhile, the look of relief on Monahan's face after he batted in his third goal of the season said it all. It was his first goal since October 20 and gave him his first multiple-point game of the year.


If you recall the "Good luck, Blue Jays" video the Flames produced last month, it looks like all the batting practice paid off for Monahan.
— Darren Haynes (@DarrenWHaynes) November 8, 2015

Despite what's been viewed as a disappointing season, Monahan has 10 points (3 goals, 7 assists) in 15 games and is on pace for 55 points. It's less than his sophomore total of 62 points but not that far off. If Saturday's game has the same impact that Bennett's breakout game against the Senators had for him, Monahan will be ahead of last year's pace in no time.

“It's always a relief to put a puck in the net. Tonight was a big night to do that," Monahan said. "I've gotta build off that.”

Hartley said he spoke with Monahan Saturday morning and told him to relax and enjoy himself.

"I had a talk with him this morning and he told me, 'I'm pressing. I feel like sometimes I'm on my heels.' I just told him to have fun," said Hartley. "I was very clear with him. Sean Monahan is a big part of today for us and a big part of tomorrow and my job with the Gaudreaus, the Monahans, the Bennetts, all our young players is to play them. Put them in all kinds of situations."

Hartley says riding it out with young players is all part of the development process.

"It's an investment and it's a great investment. Those guys have so much to offer," said Hartley. "They'll make the odd mistakes and they'll go through a little slump, a few bumps on the road where the game might be a little tougher for them but that's the they're going to learn and that's the way we're going to become a better team."