So Close, Yet So Far Away: Joni Ortio's Career Takes a Humbling Turn for the Worse

For Joni Ortio, it was a fitting exclamation mark to a truly terrible 48 hours.

In Stockton on Friday night in Ortio's first start after going unclaimed on waivers and being demoted by the Calgary Flames, the 24-year-old got lit up for four goals on 12 shots and got yanked just 13:07 into the Heat's game against Bakersfield.

Now, some rust was certainly expected. Friday was the four-week anniversary of Ortio's last game action. However, it certainly wasn't the type of performance that left the 29 NHL general managers that passed on him feeling any regrets.

Thursday was a very different day for Ortio.

In a season in which -- as Tom Petty put it -- waiting has been the hardest part -- waiting to dress for a game, waiting to make that first start, waiting for a chance to play again, the Flames goaltender had to persevere another 24 hours of intense waiting, this time wondering if another NHL team would claim him after Calgary put Ortio on waivers.

As it turns out, no team did and the Flames immediately assigned Ortio to Stockton.

Dress it up however you want, going unclaimed on waivers sends a very loud message about where Ortio's stock is at and what teams think the odds are that one day he'll develop into a full-time NHL goaltender.

If you're another NHL organization, there were a lot of very attractive things about Ortio:

Yet all 29 teams passed on him.

There he was, available for free. Ortio was that couch at the end of the driveway with the sign on it, 'Free - Help Yourself', and nobody bothered. 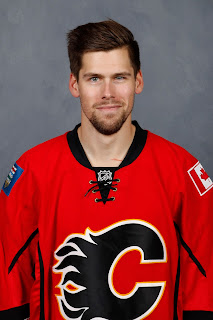 There was a lot of debate swirling this week around Ortio and whether or not he got a fair chance in Calgary. One could certainly argue he did not.

But the fact no other NHL team took him is an indicting indication that the Flames are not alone in their assessment that Ortio is just not good enough to play in the NHL right now and may never be.

Sure, for some teams there were obstacles that would have made it tricky for them to claim him. For one, they would have to keep him in the NHL so they needed a roster spot. Secondly and this will not come as breaking news in this city, there is a natural aversion to having three goaltenders.

That said, if Ortio is, indeed, a rising star loaded with untapped potential, who is on the verge of breaking through at the NHL level, surely at least one team would have done what they needed to do in order to put a claim in for him. Yet not one team did. That couch? Still there at the end of the driveway.

Ortio did have that great run of four straight wins on the road last January before losing (like a dozen Flames goalies before him) in Anaheim, games in which other NHL organizations would have had scouts at, games in which any team has access to viewing on video. Yet no one touched him on Thursday. Clearly the perception across the league is there isn't as much potential with this goaltender as many of us thought back in the summer.

I declared on Wednesday when Ortio was put on waivers that his time in Calgary was done. It was a strong statement, for sure. Too strong? Perhaps. But when a team tells a goalie that they're willing to lose them for nothing and puts him on waivers, that says a lot.

Two hurdles need to be crossed before Ortio gets another shot in Calgary.

It would not surprise me at all to see Ortio remain in Stockton the remainder of the season.

Before heading for the airport on Thursday, Ortio was asked what his emotions were. As he skirted the question, it's safe to say he didn't say what he was really thinking.

Put yourself in his position. Last contract negotiation, he fought for a one-way deal in year two of the two-year contract he signed. That was so he could get a shot this season at playing in the NHL. He made two starts -- game 9 and game 11. That's it. Two starts in seven weeks is probably not Ortio's definition of getting a shot.

Add in speculation that Ortio refused to go on a conditioning stint, which is his right if the team asked and surely they did considering how long he had gone without playing, and you get the sense that Ortio is understandably not all that enamored with how he's been treated. So again, will he have a desire to return to Calgary given all he's gone through this season.

Needs to Get Playing Again

While we can debate what Ortio's upside is and whether or not he'll re-sign with the Flames next year, one thing we can all agree on is he needs to play.

If you remember, Ortio suffered a high ankle sprain in an AHL game last February 20. That sidelined him for seven weeks. His first game back was Calgary's season finale in Winnipeg when Ortio and a lengthy cast of AHLers were shuttled into the line-up at MTS Centre while a bunch of Flames regulars rested for the playoffs. Naturally, he was rusty as he gave up five goals on 22 shots behind an AHL-calibre defence,

The following weekend back with Adirondack, who had been eliminated from playoff contention, he played two of the team's final three games as they played out the string and got ready for summer.

Fast forward to training camp and in addition to a relief appearance on September 21 (12 saves on 13 shots), Ortio got two starts. He shut out the Colorado Avalanche on 35 saves on September 24 and one week later stopped 23 of 26 shots in a loss in Winnipeg.

That's five games, although none of them I would categorize as meaningful games.

With the Flames goaltending and all-round defensive play in shambles and both Hiller and Ramo not getting it done, Ortio finally got a legitimate regular season start on October 26 in Brooklyn. It was his first start in nearly four weeks. He made 31 saves but lost 4-0 to the Islanders. A week later, he got back in against the Canadiens at the Saddledome and in what would be a lasting impression, he yielded six goals on 31 shots. He never played again.

All total, last night was only Ortio's eighth start in a span of over nine months and just the third that you could classify as coming in a meaningful game. For a guy used to playing a lot, that's not nearly enough action to settle into any type of rhythm and give him even a remote chance at being the goalie some still think he could become.

It's amazing to look back at how close Ortio might have been to this story unfolding completely different. Maybe.

It was earlier this calendar year when the Flames called up Ortio and his hot streak began with that 36-save shutout in Vancouver on January 10. As Ortio kept it going and defeated the Coyotes, Sharks and Kings, at the time it sure looked like a defining time in his career. Some were thinking he might never go back to the minors.

But of course, Anaheim happened -- he got pulled in the second period, and back he went to the AHL the very next day.

We know Ortio isn't as good as he showed last January in that stellar run, but we also know he isn't as bad as he's shown this season with last night being a total write-off. The real truth is somewhere in the middle, the question is where.

There is a lot of season left for Ortio to make a statement that the needle is a lot closer to what he demonstrated in the NHL in January, but to prove that, he'll have to be much better than he was last night.

The good news is at least this time, he won't have to wait four weeks for another chance. With Jon Gillies and Kevin Poulin both injured, the Stockton net is Ortio's and his shot at redemption will begin tonight when the Heat meet Bakersfield again.

You hope the kid bounces his back and turns his career around. But at this point, he sure has a lot to prove.