First of all, let's get the number correct.

While the Flames did finish the year last year with 97 points, it is wrong to state they "needed" that many points to finish third in the Pacific Division and make the playoffs. If Calgary finished the year with 95 points -- tied with the Kings -- they still get in based on having more regulation/overtime wins.

Secondly, as understandably skeptical that fans may be about Calgary's ability to finish this season 39-21-4 and get to 95 points, it should be noted that you don't have to go back very far in Flames history to find an example of Calgary going on that exact type of run.


Less Than 11 Months Ago

The date was December 22, 2014 and the reeling Flames limped into Los Angeles winless in their last eight. But Johnny Gaudreau's first career hat-trick capped a third period comeback and Mark Giordano scored the overtime winner in a 4-3 victory.

If starting Sunday night in Chicago, Calgary can duplicate that same pace and play .638 hockey once again over the final 64 games of this season, that would net them another 82 points and a season-ending total of -- you guessed it -- 95 points.

So is it possible? Absolutely it is.

If this team did it last year while missing Giordano for nearly half of that stretch, it's not preposterous to suggest that with his services this time as well as the addition of high-profile newcomers Dougie Hamilton, Michael Frolik and Sam Bennett, Calgary is more than capable of putting this year's early-season struggles behind them and playing at that same level once again.


Five Reasons to be Optimistic

Realistic hopes for Calgary's goaltending should be no greater than what they got last year and that's what Ramo has delivered lately. Add in his 34 stops in Friday night's 3-2 win over the Washington Capitals and Ramo has posted a .919 save percentage over his last five starts. That has him up to a more respectable .894 save percentage on the season and while that's still a long way from where he and the team would like that figure to be, his recent body of work that has come with consistent playing time should be the focus.

While most nights the veteran Finn will leave you frustrated over why he didn't stop one or two of the goals that beat him, if he can also mix in big saves on shots that should have beat him, it all balances out. Avoid the godawful goal(s) that are back breakers and most nights, two or fewer goals against should be good enough as has been the case in all three of Calgary's wins in the last 10 days.

What's wrong with Sean Monahan? Once you get past the barrage of queries about Calgary's goaltending, it has been the second-most popular question in Flames nation.

However, the 21-year-old is starting to look like his old self lately and is coming off his first two-goal game of the season Friday night in which he sniped his fifth career overtime goal and 11th game-winning goal.


Suddenly, Monahan's six goals and 13 points this season has the centre on pace to finish with 27 goals and 58 points, which isn't that far off last season's 31 goals and 62 points.

The last four games have been especially good for Monahan:

If Monahan is truly back and with the impactful year Gaudreau is having, Calgary's top line should be back in business and remember how they carried this team the final month-and-a-half last season. 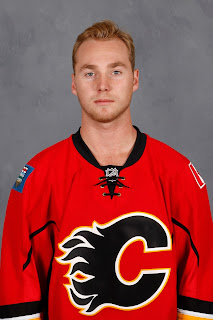 While the acquisitions of Hamilton and Frolik grabbed most of the headlines, the wild card amongst the team's infusion of fresh faces this year was always Bennett. What kind of impact could be expected from the 19-year-old that had a nice playoffs but still is very young and had just one NHL regular season game on his resume.

It took a while, not unlike the adjustment period Gaudreau experienced a year ago, but ever since Bennett scored his first goal of the season in Ottawa on Oct. 28, he has been on fire, racking up 10 points in his last nine games.

His season total of 11 points (4 goals, 7 assists) through 17 games is just one point behind the 12 points (3 goals, 9 assists) that Gaudreau had after the same number of games in his rookie season.

What's exciting for fans is the raw skill that Bennett has been showcasing over that period. His sublime set-up of Frolik Friday was first rate. A quick pivot along the sideboards to shake the tight-checking of Jason Chimera and then a perfect backhand feed to Frolik in the slot.

The result has been top line-calibre play from the trio of Mikael Backlund, Frolik and Bennett and secondary scoring that the Flames badly need.

It's been an odd year for Hamilton, who came to Calgary with so much promise yet underwhelmed for the first month.

Pairing the former Bruin with Giordano didn't work at all as the 22-year-old struggled on a nightly basis in adjusting to a new team and a new system.

The low point for the 6-foot-5 defenceman came Oct. 26 when he went minus-3 in a 4-0 loss to the New York Islanders to see his plus/minus plummet to minus-11.

However, two nights later TJ Brodie returned from injury and in the resulting shuffle, Hamilton was dropped to the third pairing with Deryk Engelland, who has quietly been as steady as any of the Flames defencemen all season.

The change worked. Hamilton's ice time dropped but his performance improved and after four games skating with Engelland, Hamilton was elevated back to the top four alongside Kris Russell and the two have been solid since as Calgary has gone 3-2-0 in their time together.

In Hamilton's last nine games, he has been on the ice for only two even-strength goals against -- both came in Colorado 11 days ago -- with one of them an empty netter. These splits speak volumes:


The stabilization of Hamilton's game has also has had a positive impact on Russell's performance, which has been improved lately. It leaves Giordano's puzzling inconsistency as the biggest lingering concern and if that's your most pressing issue, you should be just fine as sooner than later, you know Calgary's captain will restore his game to the same level it was at a year ago and we've seen in spurts this season. 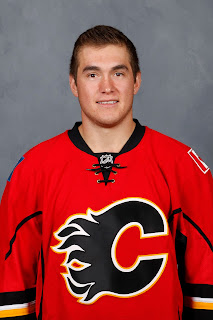 Micheal Ferland had a career-high five shots last night. That came in just 8:45 of ice time. It was his best game of the season and came on the heels of a very good game against the Lightning the previous night.

Whether it was Friday's configuration of Ferland, Derek Grant and Brandon Bollig, or Thursday's combination of Ferland, Grant and Josh Jooris, Calgary's fourth line has been very good the past couple games and while they don't play a lot, their impact on a game can be significant if they can go out there and spend most shifts in the offensive zone.

Banging, crashing and a relentless forecheck is a simple yet effective formula for a fourth line in today's NHL. Add in directing pucks on net and crashing the crease and you have a useful line that can create momentum and energy while giving your top nine a breather.

Grant has been a nice surprise and if Ferland keeps playing at the level we've seen lately and he's capable of, the Flames will be in good shape, regardless of who is running shotgun on the other wing.

It's no coincidence that stability through all four lines for the first time all season has resulted in Calgary playing much improved hockey over the last couple weeks.

There are many reasons for disgruntled fans to remain pessimistic. An NHL-low two regulation wins, for example. Given this team's nightly defensive lapses that have haunted them all season, it's understandable if some think merely going 21-39-4 over the final 64 games seems far-fetched.

But if you see through the cloudy skies, there are rays of sunshine trying to bust through. There are glimmers of hope that this team -- expected to be way better than they've been -- can start playing at the level many predicted just a couple months ago.

Also, the way the Pacific is stacking up so far this season, as few as 90 or 91 points could be sufficient to finish in third place.

However, they've still left themselves very little margin for error at this point. Urgency is needed as well as winning streak -- and a real one. Back-to-back victories doesn't count, we're talking three, four, five wins in a row.

So while it's still too early to write off the season and start tracking Auston Matthews, the next couple weeks are crucial. Two of next three are with the defending Stanley Cup champion Chicago Blackhawks with New Jersey sandwiched in-between. Following that is a three-game road trip to Anaheim, Arizona and San Jose.

There is no longer wiggle room for this team to go 2-4-0. A brutal first month has blown that luxury. Four wins in the next six games needs to be the objective, just like Calgary's first round playoff series with the Canucks last April.

Whatever happened to Bob Hartley's seven-game segments anyway? Is that still a thing? If not, Sunday at the United Center would be a great time to start it up again.