Decision Time: Five Reasons Why the Easy Move of Demoting Granlund is Not the Right Move

OK, so maybe those won't be the exact words we hear when the return of Lance Bouma necessitates a Flames version of Lebron James' The Decision. But for GM Brad Treliving, the man with the final say, somebody is going down to Cali.

As it stands, Calgary's roster is at the maximum-allowed size of 23 players with 14 of them forwards. In order to activate Bouma from injured reserve and put him on the roster, someone must come off.

With coach Bob Hartley telling the media in Columbus on Wednesday he expects Bouma to play either Sunday or Monday, the decision should come in the next 72 hours.

If this storyline sounds familiar, that's because we were already at this exact same crossroads once before. Six weeks ago when Bouma was on the verge of returning from his first injury of the season -- the broken leg that sidelined him for two months -- the same decision loomed.

I wrote about it at that time and in this piece examined the leading candidates to go down.


Of course, it all became a moot point when conveniently -- from a roster-move perspective -- Michael Frolik got hurt and went on the IR, freeing up a roster spot for Bouma. The chain reaction has been non-stop ever since. As soon as Frolik was ready to return, the same hard decision was dodged again because Jiri Hudler got injured. By the time Hudler was ready to go, then Bouma was injured again.

Finally the day for this long-awaited decision, which has been hovering over Calgary like a Chinook Arch, is nearly upon us as long as a forward doesn't get banged up Thursday night against the Blue Jackets.

In that last piece, I handicapped the five players most likely to be shipped out. If I was to repeat that same exercise today, the top four names would remain the same although not necessarily in the same order. They were Mason Raymond, Josh Jooris, Markus Granlund and Brandon Bollig.

The fifth name last time was Micheal Ferland. Truth be known, I never believed it was even a faint possibility that he would be the one to go despite his average play at the time, but I like round numbers so I wanted a fifth. Obviously, Ferland has turned it around big time since then and is now riding shotgun with Johnny Gaudreau and Sean Monahan on the Flames top line.

The fifth name I would add this time around is Joe Colborne because by being a scratch for two games last week, that goes to show that he's not necessarily as safe as one might think. But like Ferland last time, I seriously doubt his spot is in jeopardy and more so, it's the other four that should be most worried.

The most significant thing that has changed since the last time when I figured it would would most likely be Raymond or Jooris that would go on waivers is Granlund is no longer being deployed as the team's No. 2 centre. His role has diminished, he's contributed zero offensively and his linemates have changed. He was skating for a while with Sam Bennett and Hudler. Now it's Mason Raymond and David Jones.

Back in mid-December, Granlund had scored three goals in five games and was coming off an outing in which he logged over 19 minutes of ice time (even more than Monahan). Turned out that was the peak of the mountain. He hasn't scored a goal in 16 games since and over that span has just one assist. His average ice-time has been closer to 13 minutes.

As the only candidate for demotion that does not have to clear waivers, sending Granlund to the AHL would be the easy decision for Treliving. However, just because it's the easy decision, is it the right decision? Not necessarily so.


Five Reasons to Keep Granlund in the NHL 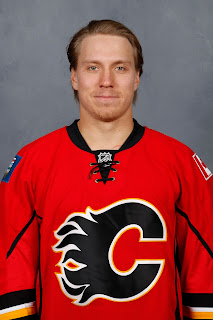 1. Need to Know if He's an NHL Player

One thing we know for certain with Granlund is he's a very good AHL player. He's proven that time and time again by scoring 39 goals in the 85 games he's spent in the minors the last three seasons. Going back to Stockton and being the best player on the team doesn't help answer the organization's bigger question of is he an NHL player?

He's had solid stretches in the NHL. He's also had less effective stretches like he's mired in right now. But at age 22, it's common for young players to go through good and bad patches like this. I'd argue it's time to let him work through his current funk and see if he can get back to being the player he was in early December. With other prospects coming, it's incumbent upon Calgary's management team to figure out sooner rather than later where Granlund fits into the organization's future plans, if he fits in at all.


2. This is Still a Rebuild, Let the Kids Play

It's a point Hartley talks about all the time. The Calgary Flames rely a lot on their younger players -- Bennett - 19, Monahan - 21, Gaudreau - 22, Dougie Hamilton - 22, Ferland - 23. He gives them a lot of ice time and a lot of responsibility and knows they'll make mistakes along the way but he acknowledges that's how they'll get better and that's how they'll grow.

That attitude of keep playing them, keep sending them over the boards shouldn't be any different with Granlund, also part of that same age group. Unless you're brimming with confidence that the Flames can knock off at least one of and potentially both of the Los Angeles Kings and Anaheim Ducks in a best-of-seven series, a long playoff run is unlikely this year. Heck, just making the playoffs isn't looking promising right now. This is the year more experienced prospects like Granlund need to be playing so if he does prove he's an NHLer, he'll be an even better one next season when playoffs become a more legitimate expectation.


Calgary still owns the 30th ranked penalty kill in the NHL at 74.8 percent. Given that status, does it makes sense to demote the player, who thus far on the season has been the most effective forward on the PK?

Granlund has accrued over 24 minutes of penalty kill ice time this season and has been on the ice for only one power play goal against. That's by far the best ratio on the team.

Here are Calgary's most used PK forwards, sorted by average time-on-ice per PP goal against.

Now goal-based stats can be skewed sometimes and maybe Stajan has been particularly unlucky and Granlund has been really lucky in terms of saves made while he's on the ice. But it's safe to say he's at least one of the team's best penalty killers and that should be a consideration when deciding who to demote.


4. Don't Change a Thing with Bennett

Sam Bennett is playing the best hockey of his young career. While some feel that makes the time right to demote Granlund and shift Bennett to centre, I'd argue this is the time you don't change a damn thing. He's working well beside Mikael Backlund, he's a real threat using his speed when coming off the wing. If it ain't broke, don't fix it.

Additionally, if you move Bennett to centre, who is rounding out that top six? You end up diminishing Backlund's role while opening up a hole at left wing on the second line. You could shift Frolik to the left side since Ferland and Hudler are on the right side but then who is going to play with Backlund? It seems like an awful lot of unnecessary changes.

Of course, it need not be that complicated. The other alternative and more likely scenario if you don't want to over tinker with the top six is Jooris steps in at fourth line centre with Stajan bumping up to be the pivot on the third line. Mind you, this is the same Jooris, who has been a healthy scratch 12 times since the start of December while Granlund has not sat out once.

I'd be tempted to keep Bennett right where he's at and keep rolling out Granlund on the third line.


5. Faceoffs Can be Overblown

A common point brought up with Granlund when rationalizing why he should be demoted is he can't win a face-off. Terrible, dreadful, awful -- all adjectives I've read and sometimes used myself in describing his efficiency at the face-off dot. However, he has improved this season and is not that far behind the other three centres on the club.

To put that into context, if each centre gets 20 face-offs in a game, they would win:

So the difference between Monahan and Granlund over the course of a game -- all ice time being equal -- would work out to one face-off win or two on some nights. If that's a key draw lost in the defensive zone that leads to a goal, it could be significant. But most likely, that extra loss could be in the neutral zone and be a non-factor.

Last year, Granlund was particularly poor at 36.8 but if he can be in and around 44 or 45 percent, face-offs is not going to be the thing that keeps him out of the NHL.

The scratches for the Flames on Thursday night in Columbus are expected to be Raymond and Jooris. Those are the same two names that topped the list of most likely candidates to be sent down six weeks ago. So while much has changed, much has stayed the same also.

With Calgary on a scheduled day off on Friday so no media availability, we've seen the team take that window of opportunity before to put a player on waivers so the outcome of that is known by the time the team next hits the ice Saturday morning at the the Carolina Hurricanes practice rink in Raleigh, North Carolina.

If the Flames decide to make the hard decision rather than the easy one and demote someone other than Granlund, the waivers process must be completed and the player re-assigned before Bouma can be activated. For Bouma to play Sunday, someone would need to go on waivers either Friday morning or Saturday morning at the latest.

Now we sit back and await The Decision.