More Dumb Than Disgusting, Wideman Could Be Destined for a 10-Game Suspension

Sorry ESPN, but "disgusting" is a little bit much. Dennis Wideman is not that type of player. That said, a suspension may still be coming.

With the NFL hype machine in overdrive leading up to the Denver Broncos and Carolina Panthers showdown in Super Bowl 50, NHL hockey isn't exactly a hot topic on U.S. national sports radio these days. In fact, it is a rarely discussed topic at any point in the regular season.

But that wasn't the case Thursday morning as the Flames defenceman was under the microscope on ESPN's Mike & Mike show after his controversial collision Wednesday night with veteran linesman and Calgary-born Don Henderson in Calgary's 2-1 loss to Nashville.

In the segment, co-hosts Ian Fitzsimmons and Mike Golic aren't shy to weigh in with their opinions on the incident, both implying it was a dirty play.

"It’s nasty, it’s bad. It’s really bad," says Fitzsimmons. "He actually sees Henderson, changes direction a little bit, he speeds up and then drops the forearm and extends his arms into him. That’s as chicken-you-know-what as it gets."


After the game, Wideman was adamant that it was an accident.

"I took a pretty hard hit down in the corner and had some pretty good pain in my shoulder and my neck and I was just trying to get off the ice and I was kinda keeled over and at the last second, I looked up and I saw him and I couldn't avoid it," Wideman said.

At the next stoppage, Wideman skated over to where the officials were gathered and apologized to Henderson. Although it didn't appear it went over all that smoothly as Henderson skated away shortly after.

"Throughout my career and I've been around for a few years, I think I've treated every official with the utmost respect and I would never intentionally try to hit a linesman or a ref or anything like that," Wideman added.

Here is the full video of what Wideman had to say when he emerged to address the throngs of media waiting at his stall after last night's game.

Bob Hartley said he didn't see it live due to the angle and how close it was to the sideboards but he saw the replay.

“We all know Wides. Wides is the greatest guy. He's not an aggressive person of any nature," said the Flames coach. "I saw him get hit in the corner and then I saw him favour his shoulder, but then the play was moving so I kind of lost track of him. It's just a bad accident.”

Wideman is not that type of player, he just isn't. Flames fans only wish he played more physical and with greater tenacity.

For example, the 32-year-old has had three fights in the last nine years and the most recent -- last month -- came when he jumped into a game-ending scrum and ended up throwing punches with Ryan Getzlaf after Ryan Kesler, one of the NHL's most universally disliked players and public enemy No. 1 in Calgary due to his Canucks past, fired a puck into an empty net after the final buzzer of a frustrating 1-0 Flames loss. So given the circumstances, you can almost scratch that one from his record.

While I don't think for one second that it was his intention to hit Henderson -- who is a pretty big dude, it's the physical force that nevertheless did occur that could land Wideman in hot water with the league and potentially land him a 10-game suspension. Making matters worse are reports that Henderson ended up in hospital for observation.


The league announced on Thursday afternoon that Wideman had been suspended, pending a hearing with NHL Hockey Operations on Tuesday.

Even if Wideman was dazed after being smoked into the boards seconds earlier on a heavy hit by Nashville winger Miikka Salomaki. Even if he was just trying to quickly get off the ice to avoid a too-many-men-on the ice penalty. Even if he was looking down and didn't see Henderson until the last minute and then tried to sidestep him. The outcome is what it was. He ended up contacting an official and that's a serious no-no according to the NHL Rule Book.

The applicable section is 40.3. Give it a read and is that not what took place? 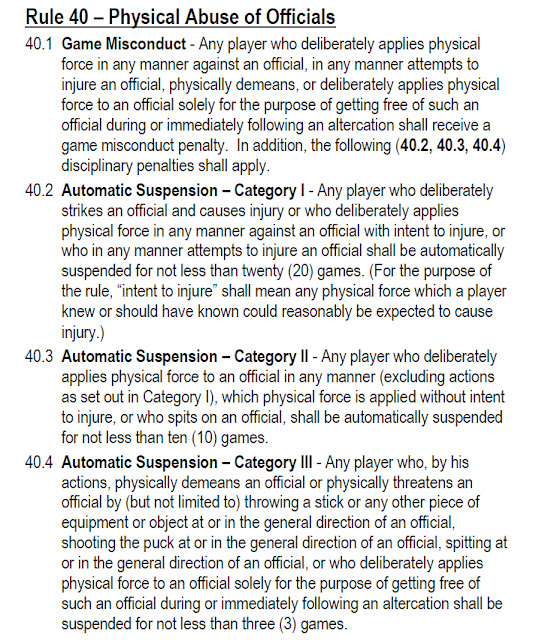 The caveat to all this, as pointed out Thursday afternoon by Sportsnet Analyst Elliotte Friedman is all of that suspension wording in the rule book is in the scenario of it being additional discipline beyond a game misconduct. In this case, no game misconduct was called. In fact, no penalty was called at all.


Wideman clarification: because no game misconduct, Colin Campbell doesn't have to follow Rule 40. Can choose whatever number he wishes
— Elliotte Friedman (@FriedgeHNIC) January 28, 2016


Mind you, I don't think whether or not a game misconduct was called should really matter. It doesn't change anything. What happened in that sequence is still what happened and while this caveat opens up the possibility of a suspension for fewer than 10 games, I'm not sure why the league would stray from a suspension length that it has put in place for these types of situations.

I don't believe Wideman intended to run into Henderson that heavily. I don't believe his intention was to run into him at all. But I don't think it's going to matter, nor should it and I bet that is how officials around the league view it also.

By not having awareness of what was going on around him -- regardless of the events that led up to it, the result and what millions of people watched over and over the last 24 hours was the inadvertent yet still deliberate-looking applying of "physical force to an official" and when that happens "in any manner" as the rule book clearly states, an automatic suspension for not less than 10 games is what would typically follow.

The timing certainly couldn't be worse for Wideman.

By unfolding on the eve of the NHL's showcase event -- the All-Star Game this weekend in Nashville, it gave the league the exact type of negative publicity they don't want -- and they won't be happy about that.

Was it disgusting? No.

Was it dumb? Yes.

Will it cost him? Probably.