With the Flames Desperately In Need of an Energy Boost, Two Red Bulls Await in Stockton

The Flames slinked quietly into the NHL all-star break like a team desperately in need of a shake-up.

Starting off flat and listless far too often lately, Calgary is in need of an energy boost in the worst way. The good news is if general manager Brad Treliving opens up the fridge door in Stockton, there are two cans of Red Bull right there on the shelf in forward Derek Grant and defenceman Jakub Nakladal.

It's been over two months since a player got on a plane in Northern California and made the short flight from SFO to YYC. Markus Granlund, back on Nov. 26, was the last guy summoned from the Flames AHL affiliate in Stockton.

Since that time, it's been the same old ingredients in Calgary and while December -- bolstered by a franchise-record home winning streak -- produced some delicious results, much of January has been the type of foul-tasting fare you would spit out into a napkin.

The impression you get is the current mix has become stale and with Calgary eight points back of a playoff spot in the Pacific Division and just two points north of last place overall, the time is right to make some changes in an attempt to inject some life into this team. 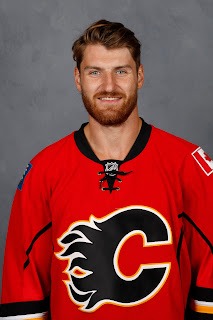 Unless you spent the last week rock-climbing on Easter Island, you’ll be familiar with last Wednesday's incident between Dennis Wideman and linesman Don Henderson that resulted in the Flames defenceman being suspended indefinitely, pending a hearing with the league today.

It seems inevitable that he'll be out for at least a few games and I wouldn't be surprised if it's in the vicinity of 10 games. Where this makes things interesting is while he is suspended, Wideman must still occupy one of the spots on Calgary’s 23-man roster.

With the Flames heading into a packed portion of the schedule – 34 games in 67 days – and in particular, six games in 10 days starting Wednesday night, there's a risk to going very long with just the minimum six defencemen.

What if someone picks up a minor injury or comes down with the flu? It leaves you with no options. In such a scenario, you either play one D short or put someone on the IR so you can recall a player but then that player is unavailable for a minimum of seven days. That wouldn't be an appealing option if it's TJ Brodie and he's only out for a day or two.

Another option is you call up Nakladal, insert him right into the line-up and you continue to have Deryk Engelland and Ladislav Smid rotate as the sixth D.

Nakladal, 28, is on a one-year deal that leaves him a UFA at season's end. He's reportedly been far and away the Heat’s most consistent blueliner all season and has also spent a lot of time quarterbacking the power play in Stockton. With the Flames 30th ranked man-advantage mired in an 0-for-14 skid over the past three games, now is the time to inject the Czech and see what you have with this guy.

But before that happens, a forward needs to go.


Opportunity No. 2 - Grant is on Fire 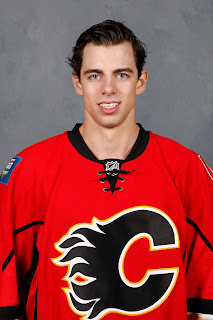 Derek Grant has 21 goals in 28 games in Stockton. He has already surpassed the goal total for the Flames leading AHL scorer from last year -- David Wolf, who scored 20 goals in 59 games. In fact, Grant has tied his career high for goals, which he set last year in 73 games. In January, the 25-year-old had 19 points (10 goals, 9 assists) in 10 games. That is the definition of scorching hot.

Whenever you see a scoring binge like that, you're always skeptical about its sustainability. What Grant has going for him is he’s also generating a ton of chances. This isn’t a guy riding a ridiculous shooting percentage of 30 or 40 percent. Instead, he's at 15.7 percent. It's still a touch on the high side but for context, Johnny Gaudreau (15.4) and Sam Bennett (15.1) are around the same mark. Grant leads the AHL in average shots per game at nearly five (4.8). Gaudreau (2.7) is tops on the Flames.

As for his attributes, what isn’t there to like. He’s big at 6-foot-3, kills penalties, just won the fastest skater competition at Sunday’s AHL all-star event, and he’s proficient at face-offs. In his nine-game stint in Calgary earlier in the season, Grant was a tidy 56.8 percent at the dot. If you need to win a key draw in the defensive zone late in the game, he’s your man.

But before that happens, a forward needs to go.

The catch is before the call-up of Grant or Nakladal can be considered, another forward needs to go to make room for Micheal Ferland.

After getting a knee to the head 11 days ago in Columbus, Ferland's concussion scare was conveniently timed for the Flames. Calgary needed to make a roster move anyway to open up a spot to activate Lance Bouma from injured reserve so the two swapped places.

However, when the Flames returned to practice on Monday after four days off, Ferland was a full participant and coach Bob Hartley said he expects him to be good to go. Based on line rushes, he’s slated to play left wing against the Hurricanes on a line with Matt Stajan and David Jones.

So, will it be one, two or three forwards from Calgary's current roster exiting town in the near future?

This is one of two questions we're about to get the answer to. That, along with who will it be?

While non-waiver-eligible Markus Granlund would be an easy choice as the first forward to ship out, the Flames are disguising it well if that's their intention. Granlund practiced on Monday as if he'll be in the line-up for a 26th consecutive game on Wednesday, centring Joe Colborne and Lance Bouma. For what it's worth, three of the Flames last four goals have come from Granlund's line.

I’ve debated the question of who should go a couple times recently and the three candidates that I'd shortlist along with Granlund are the same three that have taken turns as regular scratches all season. These are also the same three that were the extras at practice on Monday:

If it's one of those three that goes, we'll know shortly because in order to play Ferland on Wednesday, that player will have to go on waivers today in order to clear waivers in time to be assigned to Stockton.

There it is. Mason Raymond on waivers today, suggesting it will be him that's off to the AHL to open up a roster spot for Micheal Ferland.

There is one way to avoid picking a, b or c while also keeping Granlund, 22, developing in the NHL. That's by selecting d - all of the above.

When Grant and Nakladal signed as free agents last summer, part of the reason they would have chosen Calgary was opportunity.

Grant had that nine-game tour of duty that ended in mid-November. Nakladal spent eight days with the team in late October and not once dressed for a game.

Both could be future pieces for the Flames but good luck with that if you continue to keep them suppressed in the minors. Grant left the Senators because he felt he had been buried in the AHL by Ottawa. How has this year gone any differently? After eight seasons of pro hockey in Europe, it's safe to say Nakladal did not come to North America for the first time to play in the minors.

For the organization to continue to trumpet the motto 'always earned, never given' with a straight face, it's time to walk the talk. Grant and Nakladal have both earned another shot and with the Flames in dire need of some fresh ingredients, the time and circumstances are right.

Whether it's Raymond, Bollig and Jooris to the minors or pick two plus Granlund, cracking open a couple Red Bulls ASAP could be the caffeine kick the Flames need if they truly have aspirations of fighting their way back into a playoff spot.