Man, that is one heck of a career arc. 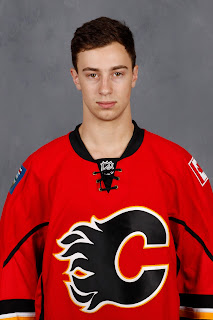 "It has been a roller-coaster," Mangiapane admitted on Wednesday, reached by phone in Barrie. "It's surreal how I've come so far. It just blows me away."

He says it was three or four weeks ago when the Flames approached his agent, ex-NHLer Claude Lemieux, saying they wanted to get Mangiapane's name on an entry-level deal.

"Claude told me they want to do a contract so let's get it done as soon as we can, before the playoffs. It just happened so quickly after that."

When the deal was struck on Tuesday, the contract was sent to Mangiapane so he could sign it, scan it, and return it to Lemieux. Except there was a problem. Who owns a scanner these days?

The Mangiapanes hopped in their vehicle and made the 40-minute from their hometown of Bolton and met their son at Milestones. After enjoying a nice meal, although not an expensive celebratory one just yet -- "I didn't want to stick my parents with too expensive of a bill," he laughs -- he signed the contract at the restaurant and his parents took it back home with them to scan it and send it on to Lemieux.

It was a special night for the whole family.

"They put in so much time, money, effort. So for them to see me so happy, I think that's what really made the moment for them," says Mangiapane, who also has a couple sisters in his fan club -- one older, one younger.

Caught up in the euphoria, it's easy to forget that for the longest time, it looked like such a moment was never going to happen.

The date was April 7, 2012. On that Saturday, 303 young men ages 15 and 16 were selected in the OHL's midget draft. Littered throughout the top 10 were players that would go on to get selected in the first round of the NHL draft:

Passed over entirely in the 15-round draft was Mangiapane, who was listed at the time as 5-foot-7 and 140 pounds. It was the first of two humbling slaps in the face for the Italian.

That summer, prior to spending the next season playing midget AAA with the Toronto Jr. Canadiens, Mangiapane attended a hockey camp in Wasaga Beach. The camp was run by Barrie assistant coach Todd Miller and he left a favourable impression, apparently.

"After seeing me there, Todd invited me to Barrie's rookie camp the following year. When I did good there, they invited me to main camp. At main camp, I turned heads and the scouts and the coach Dale Hawerchuk were impressed and they signed me," Mangiapane says. "It came right out of the blue. I was shocked by it. Originally, going to Barrie's camp, I just wanted to see how I measured up to all these big names they had and see if I could have a career in hockey."

In his rookie season, which was also his NHL draft year, Mangiapane put up solid numbers with 51 points (24 goals, 27 assists) in 68 games.

"I have to give thanks to Dale and Todd and all the coaching staff and management," he says. "I don't know where I'd be or if I'd even still be playing hockey if they hadn't believed in me and put me under their wing. I'd probably be in school right now, getting my education."

"When a hall-of-famer believes in you and says hey, you're a good player, we want to sign you, that made me believe in myself that much more," says Mangiapane, who idolized Marty St. Louis growing up.

It's called the NHL draft but for many, it's also known as the day of broken dreams.

He admits it was disappointing.

"I was the only one that didn't go from our team," he says. "We were going out to eat and they were all excited and I was happy for them and everything... but I was a little bit depressed too."

He knew that after just one season of major junior, not getting drafted was a possibility, but it didn't make it any easier.

"However, I knew it wasn't the end of the road for me either and I used it as motivation."

Reflecting back, he points to that weekend at the Wells Fargo Center along with being shunned in the OHL draft as the two events that have driven him to prove people wrong

His determination showed in his sophomore season as Mangiapane racked up 104 points (43 goals, 61 assists). Surely that would catch the attention of scouts, even if he was carrying the baggage of being a re-entry into the NHL draft.

Then again, maybe not.

"When it got into the sixth round, now I was getting nervous," recalls Mangiapane. "I started thinking to myself, oh no, it's going to happen again." 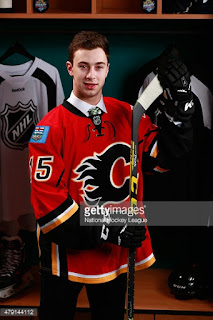 But early in round 6, with pick No. 166 -- the same pick the Flames used in 1987 to select an under-sized forward named Theoren Fleury, GM Brad Treliving headed up to the podium and called Mangiapane's name.

Viewed as a superb talent to be found so late in a draft, Mangiapane's stock has only risen ever since.

Considering the previous year, Calgary used its sixth round pick to acquire journeyman Lane MacDermid from Dallas, who played one NHL game, 25 AHL games and then quit hockey, Calgary has to be ecstatic about how Mangiapane is panning out.

There's been a few diamonds mined out of the sixth round in recent years -- Mark Stone, Cam Atkinson, Tommy Wingels, Carl Hagelin and Nick Bonino to name a handful, but finding top end talent that late in the day is rare.

You're in 'found money' territory if a pick that low becomes an impactful NHL player and Calgary's recent track record would corroborate that. Tim Harrison, Coda Gordon, Ryley Grantham and Brett Sutter to name a handful. Joni Ortio was a sixth round pick so I suppose there's still a sliver of hope there. In 2010, the Flames traded their sixth round pick to the Sharks to get Henrik Karlsson. Ugh.

Since arriving in the Flames organization, it's been nothing but positive impressions for Mangiapane. He wowed fans at development camp in July. He was one of the Flames most exciting players at the rookie tournament in Penticton.

"That was a great experience. I saw a lot of different people and I learned a lot in Penticton," he says. "It was just a fun time and it gave me the motivation to get to that next level. I went back to Barrie wanting to do well so hopefully next year, I can make the jump."

He certainly delivered on that. His third OHL season was a spectacular one with 51 goals and 106 points, all of that coming in nine fewer games than a year ago. In the league, he was second in goals and sixth in points. Two of the five ahead of him -- Mitch Marner (39-77-116) and Dylan Strome (37-74-111) were top five picks in 2015.  Another, Matthew Tkachuk, could be a top-five pick this year.

"Ya, it's been a pretty good year for me," Mangiapane understates. "Playing mostly with Labanc, Julius Nattinen, Justin Scott, Dylan Sadowy. I owe all my success to them. They're great players and they've helped me out a lot."

Mangiapane, who says he is 5-foot-10 and 180 pounds, played all three forward positions this season. He spent a stretch of time at centre but most of the year has been spent on the wing, splitting time between the left side and right side. The left-shooter says he likes both and has no preference.

As for style of game, he's not the antagonizer type but he won't shy away either.

"I don't want to get bullied on the ice. so I try to stand up for myself," he says. "But I do try to stay out of it as much as I can and just play my game. It's never good when you are taking penalties. It hurts your team and you're sitting in the box."

In December, Mangiapane served an eight-game suspension for catching an opponent in the head with a cross-check.

"I was going down the wing and their guy came to hit me, I dodged him and I went to hit him back and when I went to him back, he was already falling and I hit his head. I didn't mean to do it. It was a spur-of-a-moment thing," he says.

"I was surprised when I got eight games as a first offender. I don't remember being suspended at all in my minor hockey career. But you can't do anything about it."

Coming up as Mangiapane surely winds down his career in junior, he looks forward to soaking up a long playoff run. The Colts open up against the Mississauga Steelheads in a best-of-seven that begins Thursday night.

"It's always fun when you're coming to the rink and you're seeing your friends every day. What I'd like to get out of this is to go far in the playoffs and get some more playoff experience under my belt," he says. "I'd love to win the OHL and I think we have the team to do it this year."

Calgary fans should be excited about the possibilities of a long playoff run too. If the Colts can pull off a league title, Mangiapane and fellow Flames prospect Rasmus Andersson would be off to Red Deer in May for the Memorial Cup. As two of the organization's top young players, you know a lot of folks in Flames jerseys would be making the drive up the QE2 if that happened.