The parody Twitter account bearing his name is Boring Sean Monahan. Why it's popular and has well over 60,000 followers is because it's accurate.

By that same rationale, perhaps it's come time to change his real account to Scoring Sean Monahan because that would also be accurate.

Seriously, all the Flames third-year centre does is score goals. Constantly.

Five goals in four games last week earned him NHL Third Star of the Week honours, and got Monahan to 26 goals for the season. With 10 games remaining, a second-straight 30-goal season is within reach.

Let's not forget that Flames legend Jarome Iginla, a guy renowned for his ability to string together consecutive 30-goal seasons, never once reached that plateau in his first four years in the league.

Since beginning his NHL career in October 2013, just over three months after Calgary made him the sixth overall selection in the NHL draft, Monahan has shown time and time again that give him the puck within 15 feet of the opposition net and he's lethal.

The average shooting percentage for an NHL forward is nine percent. This kid is not average. It was fair to be skeptical when he scored at a rate of 15.7 percent as a rookie. Then he went out the next season and scored at a 16.2 efficiency. This year he's lighting the lamp at a 14.7 clip. It's not an anomaly when you are able to sustain it. Through 227 career games, Monahan is right back where he started, nestled in at 15.6 percent.

Since arriving from the Ottawa 67's where shockingly he never scored more than 33 goals in any of his three seasons, he's established himself as the go-to guy when the Flames need a clutch goal. Sure, he's sharing that responsibility with Johnny Gaudreau now but that reputation is a niche Monahan carved for himself right from the get-go when he scored in six of his first eight games. Nothing has changed since as he has spent all his time at or near the top of the team's goal-scoring list:


A Boy Among Men 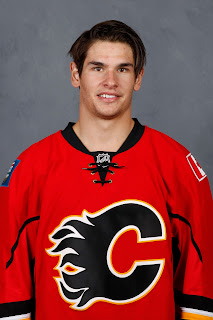 During his first three seasons in the NHL, Monahan currently ranks 19th in goals. He is the only player in the top 40 still on his entry-level contract.

He is also one of only three players in the top 20 under the age of 25 -- Tyler Seguin (107 goals) and Vladimir Tarasenko (92 goals) are the others and at 24, they're still three years older.

Coming up on the expiry of his ELC, Monahan along with his linemate Gaudreau are set to become restricted free agents on July 1 if an extension is not signed before that time. He's not going anywhere, but the question on everybody's mind is how much is Monahan going to get paid and how long will the term be when his agent Pat Morris and Flames GM Brad Treliving finally shake hands.

A look at the list of the NHL's most dangerous snipers over the last three seasons gives you a sense of the kind of lucrative payday that's forthcoming. His inability to hit the open market may factor into it but so will how much his buddy Johnny fetches. If you're opening up the vault as we all expect to pay Gaudreau after two seasons, how can you not do the same for Monahan, who has piled up three great seasons.


Best of the ELC's

For further context to what Monahan has been able to achieve at his young age, here are the top five players in goals over the last three seasons of those still operating on their ELC. Only four crack the top 100 overall.

Three years in and Monahan is giving first overall pick Nathan MacKinnon a run for his money. To be clear, I'm not suggesting the Avs got it wrong when they made the Halifax native the No. 1 selection but I doubt anyone was expecting the two to be this close three years into their pro careers.

After just a dozen assists as a rookie, Monahan's playmaking has really come along nicely. Of his 29 helpers this season, 22 are primary assists. That's an impressive ratio.

It's goals where Monahan is dominating MacKinnon and the rest of the field.

Where Monahan's accomplishments really sink in is when you look at where his 79 goals ranks among previous draft classes.

He also has more goals than anyone in the 2012 draft class and has more than all but one player from 2011. Heck, go all the way back to the 2009 NHL Draft and Monahan ranks 7th on that list, and he's just four away from cracking the top five. Think about that for a minute. Back at that time, Monahan was 14 years old and about to begin his midget season in Mississauga. Despite giving that draft class a four-year head start, he's caught up to nearly all of them.

In Flames history dating back to when the team was in Atlanta, Monahan has already climbed to 40th in goals. In the last few weeks he's passed the likes of Mike Bullard, Dion Phaneuf, Dan Quinn, Kristian Huselius and Jiri Hudler. He's just two goals behind Doug Gilmour.

If he averages 30 goals per season moving forward, he'll pass Kent Nilsson (229) to move into the top five before his 27th birthday. Wow.

With Sam Bennett in the organization, there's some uncertainty as to what Monahan's role on the team will be two, three, four years down the road.  Will he evolve into being a No. 2 centre eventually? That might be the case but first line, second line, it's all top six and his importance to this team isn't changing anytime soon.

Critics will argue that he wouldn't have nearly as many goals if he wasn't playing with Gaudreau. Well that's probably true, but can you fault him for that? If that's the combination that works, than keep those two guys together. It's not that complicated. Plus, he did find a way to notch 22 as a rookie while Gaudreau was still at Boston College.

While Gaudreau's upcoming contract is the one getting all the hype and many are expecting it to be the bigger contract of the two, one does wonder if Monahan's will be much less if it's any different at all given Monahan's body of work is three years not two, and also factoring in that he plays centre.

Thanks to Daniel Tkaczuk and Rico Fata, who were taken with that same selection in the 1997 and 1998 NHL drafts, the four goals those two disappointments combined to produce in their short stints with the Flames was surpassed by Monahan just 17 days into his career. Instead, the past Calgary draft pick whose name is going to start coming up as a more relevant comparable is Joe Nieuwendyk. Talk about changing the conversation.

Monahan might always be boring off the ice. But as long as he remains one of the more entertaining players on it, I don't think fans or anyone other than a few grumpy media scribes with blank notepads will care.