As a general rule, I hate conference calls. It’s an impersonal setting in which it can be difficult to discern emotion. No eye contact, no facial reactions, no body language.

But there are exceptions, such as Wednesday afternoon’s call with Bob Hartley.

Fired by the Calgary Flames on Tuesday after four years as head coach, Hartley is genuinely disappointed. He stated it repeatedly and you could feel it over the phone. He leaves behind unfinished business and he’s truly saddened that he won’t have the chance to continue his work with a team he views as not far away from becoming a legit Stanley Cup contender. 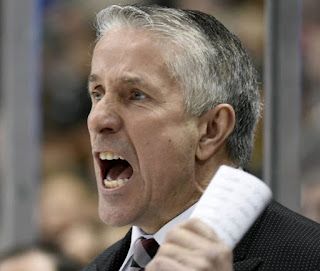 “Yesterday, I felt very empty, very sad,” said Hartley, who departs as the third winningest coach in Calgary Flames history behind Bob Johnson and Terry Crisp. “I felt that we, as an organization, had done lots of good things that maybe didn't show in the standings but will show in the very near future.”

Hartley’s record over his four years was 134-135-25. Just like his previous two NHL stops in Colorado and Atlanta, he makes it through four full seasons, but not through a fifth. Unlike the first two times he was let go, he didn’t even get a chance to start a fifth season in Calgary.

“I just feel very sad that I didn't get the opportunity to keep working as a group, keep working as an organization for better days,” he said. “There's no doubt in my mind that this team is 1-2 years away from being an excellent hockey club and making a push real deep into the playoffs, but obviously it's going to be for somebody else.”


Proud of the Foundation Left Behind

Hartley says the developmental strides players have taken, even if did not correlate to enough victories last season, will ultimately pay off.

“The progression of our young players, plus look at Mark Giordano, he just had back-to-back unbelievable seasons. There's lots of development that went on. That's what is disappointing to me. If you look at our record this year, yes it's disappointing, but on the other hand, the work that has been done, the progression that maybe you don't see in the standings today, it's a great investment for the future.”

He singled out several players, whose careers are on the rise.

“I look at Mikael Backlund, Colborne, Monahan, Johnny, Bennett, Brodie, Hamilton. We saw a progression in those guys. You look at the leadership group. I really believe that this team is just a couple players away from being a great hockey club, despite the fact that they're still a very young hockey team.”

While last year’s 20-point regression is what’s fresh on the minds of Flames fans, not to be overlooked is the job he did in transitioning the team from an aging, mediocre, cap-constrained team going nowhere to a young team with a bright future. You tend to forget that his first year was the lockout shortened 2012-13 season that was also the last year in a Calgary jersey for Jarome Iginla, Jay Bouwmeester and Miikka Kiprusoff. Three significant pieces.

What Hartley established along the way was a new culture based on a blue collar work ethic that fans embraced. Going to the Saddledome become fun again as Calgary became a team easy to root for because despite a disparity in talent, they never, ever gave up. Short on skill but long on effort, if they were going to lose, it wasn't going to be without a fight to the finish.

“From day 1, we started to establish a very good culture. A culture of hard work, a culture of expectations where you couldn't hide, you had to deliver. Remember our phrase that we were always saying, ‘Always earned, never given.’  I'm really proud of this.”

Asked about philosophical differences that may have existed between himself and general manager Brad Treliving, perhaps around style of play, Hartley says that he was not aware of any such divide.

“Brad and I always talked and I always thought that we were on the same page,” said Hartley. “He was very supportive of (the coaching staff). At no point was there a difference in opinion and everything so yesterday, that was news to me.”

Hartley said the struggles of both the power play and penalty killing were partially due to how many young players were on both units.

“I look at our power play. Looking at the Sean Monahans, the Johnny Gaudreaus, the Sam Bennetts, the Dougie Hamiltons. They're part of our younger players,” he said. “Between the Edmonton Oilers and ourselves, we probably have the two youngest power plays and with power plays and special teams, it's all about experience.”

As he did on exit day, he also reiterated the role poor faceoff percentage played, especially on the penalty kill.

“Face-offs were a major problem,” he said. “We allowed 11 goals in the first 12 seconds of an opponent's power play. There's not much you can do to defend when you lose the faceoff and the puck ends up in your net. “


Wants to Get Back on the Horse

Make no mistake, Hartley wants to keep coaching. This is not someone that has any plans to take any time away from the game. If it’s up to him, anyway. 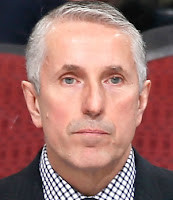 “Coaching is my passion. Coaching is in my blood. There's no doubt that I want to coach. I'm only 55 years old and I believe that I'm in great shape. I love this game, I love teaching. I love competing to win hockey games,” he said.

With coaching vacancies currently in Anaheim, Ottawa and Minnesota, you can bet he’ll get himself an interview or two.

“Right now the coaching carousel is spinning out of control, it's the time of year. Obviously there are lots of jobs, there are lots of names and there's going to be lots of speculation but I will not get involved in this. There is a process going on for every job open and I'll be very respectful to that process.”


Leaves Appreciative and with Great Memories

Reflecting back, last year’s playoff run that saw Calgary make the playoffs for the first time in six years, then knock off Vancouver for their first series win since 2004, stood out as an obvious highlight.

“I was blessed to work in a great community. The fans in the ‘C’ of Red. I was looking at this in 2004, watching TV, and looking at all the stands and the Red Mile, and during the games last year in our playoff run, I was able to witness it live and it was just unbelievable,” Hartley said. “I have great memories leaving this great community and I want to thank everyone.”

Shortly after getting the news, Hartley had a long day of travel. He said it gave him plenty of time to contemplate the day’s events.

“Obviously spending lots of time on the plane, I had lots of time to reflect. First and foremost, I would like to say thank you to the organization because I spent four wonderful years in Calgary,” he said. “We took a veteran team and we re-tooled it into a much younger hockey club and I think today that we're very proud of the foundation of this hockey club.”

It’s a cruel reality in sports that so often, by the time the work put in by a coach or general manager comes to fruition, that person has moved on. Often not by their choice.

Perhaps in his next gig, Hartley will get a chance to do the opposite for a change. Be the guy that comes in after someone else has put in thankless years developing a young core, and be the guy that gets the glory for taking them to that next level. It would only seem fair.