Why settle for one or the other when you can have both.

Up until now, debate swirling around Calgary's head coach vacancy has been around whether Flames general manager Brad Treliving would opt for someone that has been around for a long time and has decades of coaching experience, or go with someone relatively new that has little or no head coach experience at the NHL level.

Well, perhaps he won't have to choose one or the other.

One of the newer names to be bandied about lately came up again on Monday on Calgary's Sportsnet960 radio via Sportsnet Analyst Elliotte Friedman and intriguingly, he's someone that is a combination of both.

Geoff Ward, a 54-year-old former phys ed teacher, is currently at the IIHF World Championships as an assistant coach with Germany, who are third in Group B -- behind Canada and Finland, but ahead of the Americans.

While he says he doesn't speak German, Ward has a long history with hockey in that country having spent three separate seasons over there in the past. His latest stint overseas came just two years ago. 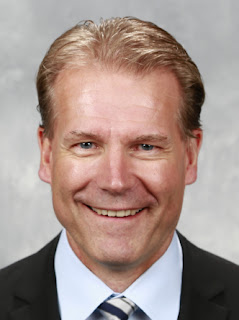 Coaching hockey for over half of his life, Ward described himself as a "career coach" when he was hired last June to be an assistant coach under newly-hired John Hynes in New Jersey.

It was his return to the NHL after a year in Germany. Prior to that, he spent seven seasons as assistant coach to Claude Julien in Boston during which the Bruins made the playoffs every year. That included winning the Stanley Cup in 2011 and reaching the Cup final in 2013, losing to Chicago.

With multiple years remaining on his contract but seeking a fresh challenge, Ward resigned and headed overseas in the summer of 2014, accepting a job as head coach of the Mannheim Eagles in the German hockey league. His one year was a rewarding one as he led his team to its first league championship in eight years.

Content to stay in Germany, Ward was wooed back to North America by Hynes and Devils GM Ray Shero. Upon his return, he told Devils beat writer Rich Chere of New Jersey Advanced Media that his experience in Germany was awesome.


"Extremely positive experience for me all the way around," he said. "The organization is run like an NHL team, the building seats 13,400 and it was sold out most nights. The ownership was outstanding and gave us all the resources we needed. Management was great. I have nothing but good things to say about my experience there. It was really fun. It ended up being an excellent thing for me."


Three trips to league finals in a span of six years, winning twice. That would definitely tick one of the boxes for Treliving, who last week told Michael Traikos of PostMedia that quality of experience was his priority in his coach search, not necessarily quantity of experience.


“To me it’s not as much about where you’ve coached, but what you’ve built and what your piece was in growing it,” said Treliving. “It’s being involved in winning programs."


But if you have the option for both quality and quantity, you can bet that would be especially attractive.

Boston Globe Bruins beat writer Fluto Shinzawa talked to Julien about Ward's return to the NHL last September prior to a preseason meeting between New Jersey and Boston.


"Tactically, he’s very good. In New Jersey, he’ll help them quite a bit with the tactical point of it, because he spends a lot of time on it and he enjoys that, whether it’s five on five, power play he worked on, stuff like that.”

In a Q&A last summer with popular Devils website Fire & Ice, you can glean further insight into Ward's character, his philosophy, and what motivates him.

On why he left Boston:


“That was my decision. I still had a couple years left on my contract in Boston and I just really felt I'm a career coach – I've been in it now 27 years or something like that – so I really felt I just needed a change, something new to sharpen the saw so to speak."


On the fit with the staff in New Jersey:


“I'm a relationships guy and I think they are (too) and I was drawn to what they represent as people and how the situation will work more than per se how the structure of the hockey team is going to be. I know John comes from a teaching background and I'm an old phys ed teacher, so there's a lot of exciting things that way and it leads to similar philosophies, similar beliefs, but the part I enjoy the most about coaching is building something."


On his time working under Julien:

The Devils in the Details

With New Jersey, Ward's responsibilities included the power play and the forward group.

On the man advantage, the Devils finished ninth in the NHL. That's a pretty decent accomplishment on a team in which Kyle Palmieri, who had never before scored more than 14 goals, was the team's leading scorer with 57 points (30 goals, 27 assists).

Also having a career season was Adam Henrique (30-20-50) and before being dealt at the trade deadline to Boston, veteran Lee Stempniak had 16 goals, the most he's scored in five years.

Ward was also in charge of the PP with the Bruins. In his final year in Boston, it ranked third.

His stint in Mannheim was not his first experience in Germany. Bookending his time in Boston, he spent the 2006-07 season in the Deutsche Eishockey Liga (DEL) as head coach of the Iserlohn Roosters.

He also spent 2000-01 in Germany as head coach of a second division team. It was after that first season abroad that he connected with Julien, who at the time was head coach for the Montreal Canadiens' AHL affiliate in Hamilton.

Ward worked under Julien for a year-and-a-half before taking over as head coach in January 2003 after Julien was promoted to head coach of the Canadiens after the firing of Michel Therrien.

Under Ward's direction, the Bulldogs advanced all the way to the Calder Cup final that season. Ward was named co-AHL coach of the year (with Julien) for his efforts.

His next two seasons before heading to Germany were spent as head coach of the Edmonton Oilers AHL affiliate.

Prior to switching career paths to the pro game, which began with one season in the ECHL in 1999-2000, Ward spent his time coaching in Ontario.

In 1989 at age 27, he started out in his hometown, serving as assistant coach at the University of Waterloo. He spent three seasons there before jumping to the OHL as an assistant coach for Niagara Falls.

One of his team's players that year in Niagara was 16-year-old Ethan Moreau, who would go on to be a first round pick and spend a portion of his 900-plus games in the NHL as captain of the Edmonton Oilers.

Ward returned to Waterloo the next year as head coach of the city's Junior B team and in his one season behind the bench, they went the distance to win the Sutherland Cup as Ontario's Junior B champions.

In 1994, Ward returned to the OHL with Kitchener, taking over as head coach after two months when the coach was fired. He remained in that role the rest of that year and for three additional seasons. In years two and three, his team got progressively better, going two rounds deep in the playoffs both years. Oilers 1996 first round pick Boyd Devereaux was one of his players during those two seasons.

He then spent one season as head coach of the Guelph Storm, leading them to a first place finish in their division. That team featured Craig Anderson in net, who would be selected by Calgary that ensuing summer in the third round of the NHL draft -- although he never signed with the Flames.

We keep hearing that Treliving is not in a rush to name a new head coach and given his commitment as Team Canada co-GM for the World Championships and with him being over in Russia at the moment, the logistics have been far from ideal so far.

When he returns to Calgary next week, one can expect the process to kick into high gear.

The one thing we know is if Ward is a legitimate candidate as reported, it's further proof that Treliving is committed to being extensive and thorough with his coach search and in thinking outside the box in terms of the types of candidates being considered. That's not a bad thing either.

Also, given where the Flames are at and with such a key portion of the current roster being young players, a coach with a history of being a teacher as is the case with Ward, could be a pretty decent fit.

Stay tuned as the coach candidate carousel continues to spin.