Despite having way sexier options to choose from, the Flames opted for the goalie with the great personality. 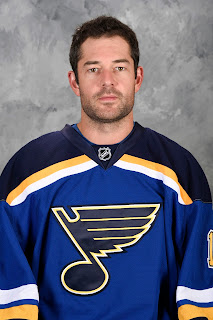 On Friday night, Calgary general manager Brad Treliving left Tampa Bay's Ben Bishop and Pittsburgh's Marc-Andre Fleury standing at the curb, instead acquiring 31-year-old Brian Elliott from St. Louis in exchange for a second round pick in 2016 and a conditional third round pick in 2017.

Meant as a metaphor, there is actually a lot of truth to it.

While Bishop and Fleury would have been the type of additions that would get you wolf whistles at the bar, Elliott is the one you would be proud to bring home to meet your mom.

Consider this: For four out of the last five years, the native of Newmarket, Ontario, has been the Blues nominee for the Bill Masterton Trophy, which goes to the NHL player "who best exemplifies the qualities of perseverance, sportsmanship, and dedication to ice hockey."

Those are qualities that will mesh well with the culture that's been established in Calgary. Three nights ago, team captain Mark Giordano was awarded the NHL's Foundation Award that goes to a person "who applies the core values of hockey—commitment, perseverance and teamwork—to enrich the lives of people in his community."

To borrow one of the patented expressions of radio colour commentator Peter Loubardias -- good people.

To truly appreciate Elliott's journey to where he is today, you must go back to the beginning.

Drafted out of Junior A

In 2003, Elliott was drafted 291st by the Ottawa Senators. That was the second-to-last pick in what was a nine-round draft back then. As the 28th and final goaltender off the board, he was taken exactly 290 picks after Fleury.

However, rather than astonishment that Elliott went so late, the reaction more so could have been one of surprise that he was drafted at all.

Ranked 29th among North American goaltenders by NHL Central Scouting, he was coming off a year in which he played for the now defunct Ajax Axemen of the Ontario Junior Provincial Hockey League.

If you're not familiar with the OJPHL, that would have been considered Junior A so a level below the OHL. Ajax was a lousy team too, finishing 8th out of nine teams in its division with a 12-31-6 record. Elliott had a nondescript 3.86 goals-against average.

That fall of 2003, it was off to 'Badger Bob' Johnson's old haunt, the University of Wisconsin, to play for former Flame Mike Eaves. The leading scorer his first season was former Flame Rene Bourque.

After two years patiently biding his time as the back-up and only making a combined 15 starts, Elliott took over Wisconsin's starting job in his junior season in 2005-06. With Joe Pavelski providing the offensive spark, Elliott backstopped the Badgers to a National Championship. He went 25-5-3 in 33 games with a 1.55 goals-against average, .938 save percentage and eight shutouts. Included was a shutout streak of nearly 270 minutes. He was one of three finalists for the Hobey Baker.

After completing his senior season in which he graduated with a marketing degree with honours, Elliott quickly signed with Ottawa which enabled him to report to the AHL. He got into eight late-season games with Binghamton.

With Ray Emery out with a wrist injury, Elliott opened 2007-08 -- his first pro season -- as the back-up to Martin Gerber.

After watching from the bench for the first two games, he made his NHL debut on Oct. 10 and made 28 saves as the Senators won 3-1 in Atlanta. Only Ilya Kovalchuk beat him. Elliott was named the game's first star. Of note, that dropped the Thrashers record to 0-3. That losing streak would extend to six games resulting in the firing of coach Bob Hartley exactly one week later.

Despite the fine performance, that was his only NHL action that year as Gerber started the next night and Emery returned shortly after.

After splitting the next season between the NHL and AHL, Elliott took over as Ottawa's starter in 2009-10 and was their No. 1 guy for a season-and-a-half before being dealt to Colorado in exchange for former Flames draft pick Craig Anderson.

After finishing off 2010-11 with the Avalanche, it was off to St. Louis, signing as a free agent.

It was in his five-year stint in St. Louis where he established himself as one of the NHL's best goaltenders.

However, as good as he performed, he never seemed to fully gain the trust of the coaching staff and despite some very good regular seasons, he gave way to Jaroslav Halak in one playoffs, Ryan Miller in another and Jake Allen two years ago.

Ken Hitchcock turned to Elliott this year and was rewarded. Stopping 31 of 33 shots in game 7, he led St. Louis past the Chicago Blackhawks in the first round and ultimately got the Blues to the Western Conference final.

Vacationing in Croatia so unavailable for comment on Friday night, Elliott shared some thoughts with PostMedia reporter Kristen Odland on Saturday. Clearly he is excited about coming into a situation where he's finally the guy, no question.

Just spoke with new #Flames G Brian Elliott. "With this trade, Calgary’s obviously shown a lot of interest in me and it was welcoming."
— Kristen Odland (@Kristen_Odland) June 25, 2016

Elliott: "A winning team goes a long way in that city. That’s what I’m there for and I want to get that started.”
— Kristen Odland (@Kristen_Odland) June 25, 2016

Elliott: "I want to make Calgary one of the toughest places to play.”
— Kristen Odland (@Kristen_Odland) June 25, 2016


Then he greeted fans himself.

Calgary, I'm honored to become a #Flames . I've wanted this opportunity and am ready for it. Can't wait to play for the #CofRed
— Brian Elliott (@KidElls1) June 25, 2016


Equally excited should be the Flames as the goaltending has been a constant issue in recent years.

Combined save percentage for Calgary goalies since Sept. 9, 2013, when Kiprusoff officially hung up his blocker, has been several shades of mediocre:

Compare the whole lot to the remainder of the league over that three-year period and they all rank in the bottom third. Captured in full grisly details here, this past season was especially awful.

The more you think about it, Elliott really was the shrewd choice for Treliving.

Seven years at $7 million for Bishop, if reports are accurate of what he wanted in an extension, would have been frightening term. His injury history would have been another worry.

Now the chronic playoff yips for Fleury will no longer be anyone's concern, nor will his concussion history.

Instead, the veteran known affectionately as 'Moose' makes for a very practical pick-up that at a $2.5 million cap hit this year is dirt cheap. Should he be extended 2-3 years as one would expect -- perhaps as soon as July 1 when such an extension can be proposed -- the salary increase shouldn't be that extreme. Plus that extra dough would kick in after several other big contracts come off the books after 2016-17 -- see Mason Raymond, Dennis Wideman, Ladislav Smid, Deryk Engelland.

Meanwhile, Elliott will serve as the ideal bridge to Jon Gillies and should the Flames top prospect be ready sooner than expected, that's a 'good news' scenario that you deal with it at that time.