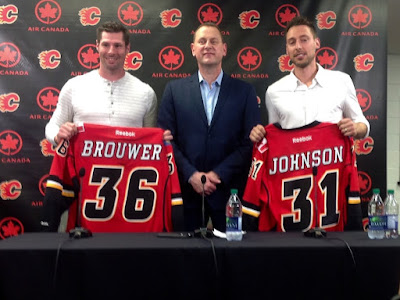 Everybody loves to find a bargain.

Every time my wife comes home with a new pair of shoes -- and that's often -- the first words out of her mouth are what the regular price would have been.

Twenty-two years of marriage and not once has she paid regular price for shoes and there's a mountain of footwear in our closet that would make Imelda Marcos jealous.

Well, safe to say if my wife was an NHL general manager, she would never go shopping on July 1.

When you head to the mall on Canada Day as 30 GMs do annually, you do so not looking to find a steal, but more so to buy something of which there is a limited quantity.


You Only Pay for Quality Once

Of course, you can spend less if you wait and go free agent shopping later in the summer at Winners or Marshalls, but then you're picking from the leftovers that nobody else wanted. Inevitably, you end up settling for something you don't like nearly as much.

Sometimes, with Friday at the Saddledome as an example, you're better off paying a little bit extra to get the exact thing you want.

"Building your team on July 1 is a recipe for disaster but is there an ability for you to fill holes or address needs? Absolutely," said Brad Treliving. "It's a balancing act. Prices can be driven up and you have to manage that, but the supply is always less than the demand."

At the end of the day -- literally -- Treliving said he was happy with both of his July 1 signings in which Calgary inked Troy Brouwer to a four-year/$18-million deal and goaltender Chad Johnson to a one-year/$1.7 million deal.

"These are two guys we were focused in on," said the Flames GM, adding that both players were in high demand. "And it's one thing when a guy goes out on the market and you're competing against new teams, but when players can potentially stay in their same market, that's always a difficult time. You have to be very careful, but we felt comfortable with the deals we did today."

The Flames had a need and a very specific need. They were looking for a player capable of being a top-six right winger and ideally, for once, wanted it to come in the form of someone playing his natural wing. 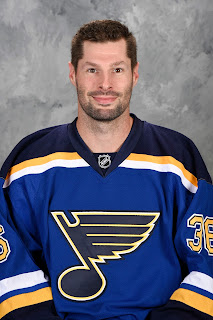 "In Troy's particular case, he's a right shot. So that opens up opportunities. You look down the middle and we have four left-shooting centre men," said Treliving.  "To have the ability to have a right shot on your power play is a completely different look, which we haven't had from a forward position."

Over the last seven seasons, only 16 right wingers have scored more times than Brouwer with 140.

That said, you're overlooking at least half of his resume if you're judging him on his point totals alone.

Brouwer brings leadership and experience in spades. He plays both special teams. He admitted he's also not shy about speaking up when something needs to be said in the dressing room. Plus, he has 98 games of playoff experience that includes winning the Stanley Cup with Chicago in 2010.

Add up all the other forwards that will potentially be part of the Flames opening night roster and you only get 152 post-season games -- 35 of them from depth forward Brandon Bollig.

"We've added three men here in the last week," said Treliving, alluding to draft day trade acquisition Brian Elliott as well. "These are guys that I think are going to be excellent in what they do from 7 to 9:30 on the ice but the other part is the practice habits.

"We have a lot of young players around here and you learn from what you see, you learn from what you watch, and these are guys that do it right every day. They're coming here to win, the habits that they have, both practices and in games, are habits that we want our young kids around. As much as it's about what they do on the ice and that's a big part of it, we've added some people that are going to be excellent role models for the group."

Treliving emphasized that with core forwards Johnny Gaudreau, Sean Monahan and Sam Bennett being age 22, 21, and 20 respectively, you need to surround them with experience.

"Those are people we're building around here. So how do you best support them," said the GM. "Part of this thing is having guys that do it right, having guys that push each other. But there are times to have a hug too, and say listen, I've been through this before, it's not the end of the world when we have a bad night or a bad shift."

Brouwer says he looks forward to being part of a new team with such a bright future,

"I see a lot of potential. I see a good mix of what you need to win. Good, veteran presence with a lot of young legs and a lot of enthusiasm. I think they've done a great job the last couple weeks shoring up the goalie situation," he said.

Brouwer also acknowledged he knows the club is coming off a disappointing season and is looking to rebound.

Chad Johnson comes to the Flames as an established NHL goaltender. This is something Joni Ortio was not.

Johnson's save percentage over the last four seasons, while playing behind a carousel of different defences -- some not very good at all -- in Boston, Arizona, Buffalo and Long Island, is a respectable .917. Since 2012-13, that Johnson ranks 22nd among goalies with 80 or more starts.

No, he's not at the same level as the others, but his numbers aren't that far off either and at $1.7 million, he's making considerably less money.


Stabilizes the Crease at Half the Cost

"The last week, being able to add Brian Elliott and now being able to add Chad Johnson to our goaltending position, has solidified and strengthened that position on our team," said Treliving, who will pay this year's tandem just over $4 million compared to the just under $9 million earned by last year's trio. 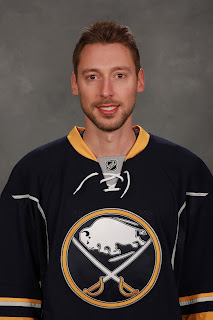 Plus, that stability comes in the form of a one-year deal so it allows the organization a chance to reset at the end of the year, evaluate Johnson, assess how Jon Gillies' development is coming along and go from there.

Living year-by-year has become routine for Johnson, who has played for five different organizations in the last five years. But he hopes he can find some stability in the city he grew up in..

"Nobody wants to keep switching teams, but it takes time," said Johnson, who played his minor hockey for Bow Valley, before moving on to the Buffaloes. "This is an opportunity. Brad thinks highly of both of us and for myself, that's important to me, to possibly -- with a good season -- get that extension and be here long term."


Building off a Busy Season

In 45 games last year with Buffalo, biggest workload yet in his NHL career, his .920 save percentage ranked him 15th among goalies with 25 or more starts. One spot ahead of him was Henrik Lundqvist, two spots behind him was Frederik Andersen.

"It was a good stepping stone in the sense that everybody saw that I could play consecutive games, that I could be that relied-upon guy," said Johnson.

He says when you've been a back-up all your career, it becomes a label.

"It's changing that reputation, changing their perspective of what people think I am," he said. "Last year opened up a lot of people's eyes. Hey, this guy can play a lot of games, this guy can compete, win his teammates over and be that relied-upon guy to be the starter. That was big for me."

While Brouwer has no family ties to the city, his decision a while ago to build a house in Calgary the result of it being halfway between his family in B.C. and his wife's family in Saskatchewan, Johnson is a full-on Calgarian (moved to the city from Saskatoon at age one). He grew up here and was a huge Flames fan as kid. Throughout his time in the NHL, he always spends his summers here. He says he has always kept an eye on the Flames goalie situation and finally, this summer, there was a fit for both him and the team.

His wife -- they just got married -- is also from Calgary and in a bizarre coincidence, turns out the house his wife grew up in is now the house Treliving's family lives in. Yep, one owner in between, but when Treliving moved to town, he bought the house that was built by Johnson's wife's parents. Now that's wild.


About the Flames Cap Space

So now what? Is Calgary done or are there more changes coming? My sense is the focus is now shifting to Gaudreau and Monahan and getting those long-term deals complete.

Treliving said the team had two needs going into free agency -- top right winger and back-up goalie -- and they got both, so while he wouldn't say it, he seems content with the roster for now.

Doing some loose projections this morning and by no means am I a certified capologist, I figure that the GM still has a little bit of salary cap room to work with but not much.

How I arrived at this conclusion is an exercise in projecting, estimating, interpreting the CBA (LTIR rules are an exhausting read) and with an executive decision or two mixed in as well. Among the variables not yet known:

In order to give us some tangible numbers to work with, I filled in all the blanks above and here is the math that I came up with.

That leaves Treliving with a little over $2 million by my approximation. That said, maybe Monahan costs more, maybe Gaudreau costs less, maybe Bollig ends up in the minors, maybe there are further signings. But the bottom line is the team should be OK and when asked about his team's cap situation on Friday, the GM said they had some cushion.

Here is a look at how the Flames roster could look come October:

As summer finally begins around the NHL, the draft and the madness of July 1 behind us, Calgary's roster is finally starting to round into form.

Joe Colborne is gone, so is Joni Ortio, so is Mason Raymond. At season's end, the GM spoke candidly about evaluating everyone and everything and the changes have been sweeping. Can't forget there is also a new coach in Glen Gulutzan.

Whether the results will improve, that remains to be seen, but looking at the roster as it stands today, one can't argue that it isn't a much better team on paper anyway.

Now we sit back and wait.