Bad NHL Contracts and Dandelions: Difficult to Eliminate, Your Best Hope is to Minimize

When you spend most of your time staring at your own backyard, it's easy to find faults. Crabgrass in the veggie patch, black knot fungus in the lilac bushes, a couple patio blocks not quite level.

If you have too much time on your hands as is often the case in the summer, it can become all consuming. You start dwelling on it as you sit on your adirondack chair, sipping your morning latte.

Sometimes the best remedy when you're suffering the backyard blues is to go for a walk. Throw the leash on the dog, download Pokemon Go (or your favourite Flames podcast), whatever it takes, just get out there and take a look at how other backyards in the neighborhood are doing.

Chances are, once you see the strewn mess that exists in most people's backyards, you'll return home feeling a whole lot better about your own situation. 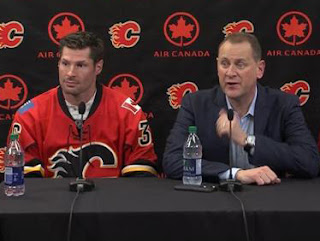 There's been a lot of debate about the contentious Troy Brouwer free agent signing on July 1 for four years and $18 million.

Critics suggest the $4.5 million will hurt the Flames down the road. Too much money and for too long of term has been the popular refrain. While I fully agree Brouwer at $3.5 million annually for three years would have been a far more palatable pact, that offer wouldn't have got it done.

Well some will argue then it should never have happened, I do understand where general manager Brad Treliving and the Flames are coming from and why they were willing to pay a little more and go that extra year to get their guy, in what was a weak free agent class.

This is a player that for lack of a better term, checked a lot of boxes in terms of what the club was desperately looking for:

You can dispute the importance of so-called intangibles like leadership and experience and there are certainly some, who overvalue them, but they are a significant part of Brower's make-up and believe in them or not, it's those qualities that made him such a coveted player for Calgary.

The Flames are a team that has its sights set on the playoffs and it's at that time of year in particular where I'd expect Brouwer's value on a young and inexperienced team to go up exponentially.


Is it a Weed or a Yellow Flower?

Is it really that horrible of a deal? I get that a four-year contract starting at age 31 doesn't sound ideal. After all, it wasn't that long ago that Curtis Glencross, just one year older at that time, was told by 30 NHL GMs to go back to ranching.

But then again, then there's a guy like Joel Ward, who has many of the same qualities as Brouwer.

San Jose's rugged right-shooting winger has a nice scoring touch, a reputation for playing his best in big games, is a good penalty killer, isn't bad on the power play and was a key cog for the team last season. He sniped 21 goals and 43 points in the regular season and notched another seven goals in the playoffs -- tied for third on the team -- as the Sharks made it to the Stanley Cup final.

Ward's similarities to Brouwer go back to the start -- Ward went undrafted, Brouwer was a 7th round pick. Where they differ is Ward's impactful 2015-16 season, the first of a three-year deal, came at age 35. That's one year older than Brouwer will be after playing out the final year of his deal with the Flames.

What even the harshest of Brouwer skeptics can take solace in is when you look around, you'll find there are worse contracts out there, many of them in the same neighbourhood.

For the sake of argument and scratching the Ward testimony from the record, let's say the Brouwer contract is for one year too long and regression will set in at age 34.

At forward, here's how Brouwer's deal stacks up comparatively in the Pacific Division. Listed is the amount of term that will be remaining when each player enters his 34-year-old season:

Damn, there is potentially all sorts of black knot fungus in that group. I would argue that many of the contracts on that list will turn out to be bigger headaches than what Calgary will be faced with.

Look beyond forward and there are others in the division too. Arizona goaltender Mike Smith, 34, still has three years remaining at $5.7 million in annual average value. You wonder if he hasn't already been passed on the depth chart.

Ideally, every player would agree to sign only for what they're worth and all contracts would be designed to either terminate or drop in average annual value as players age and their skills erode. If only there wasn't an NHLPA.

Of course, as Jaromir Jagr and Alexander Semin have demonstrated, the age at which decline happens and how severe the drop-off is, is something that can vary significantly from player to player.

But, no world is perfect, especially not the world that is the National Hockey League.

Consistent with any industry in which there is an element of supply and demand, certain players that are in limited supply due to their attributes will cost more. They've got the leverage, it's that simple. They will also often get longer term than ideal because once again, they can.

The reality is sometimes you need to overpay -- sometimes in average annual value, sometimes in term, often in both, to get what you need. Especially if you have identified a pressing and very specific need. The theory at work is you're better off overpaying for exactly what you need, than paying less for someone substandard, who doesn't address what you're looking for.

But that is the stuff of dreams and HGTV.

Back to reality, even the Stanley Cup champion Pittsburgh Penguins, as nice as their backyard looks with Lord Stanley's mug perched in the middle, still has some rough patches. Marc-Andre Fleury, owned $5.75 million the next three years, will be an expensive back-up goalie the next few years if Matt Murray remains the starter. Chris Kunitz soon turns 37 and has another year to go at $3.85 million.

Sure, three years from now, that contract of Brouwer's may end up hurting the club but while that's a factor to consider, it should not be a reason to not do it. If you identify him as a piece to the puzzle that can help you win right now -- as in the next two-to-three seasons -- that's your risk-reward equation.

As you gaze into your backyard, it's easy to start daydreaming and lose yourself in what could be years down the road. But sometimes you need to live in the present too. As they say in baseball, flags fly forever.