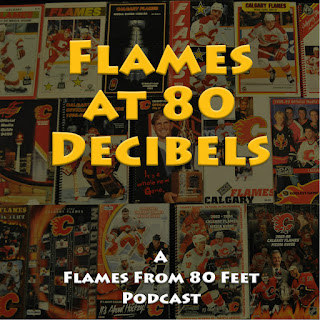 Determined to quench your thirst for off-season hockey talk, I recorded another podcast this weekend. On Saturday, the always-entertaining and well-connected Ryan Leslie stopped by my home recording studio (aka my kitchen) and together, we ripped off episode No. 4.

The former Sportsnet broadcaster and current host of Flames TV had the distinction of being the first to join me in using my new Blue Yeti microphone. So yet another milestone achieved as I slowly but surely figure out this world of podcasting.

That said, there were still some learnings. Standing out this time was how noticeable it is when someone (first name rhymes with Bryan) taps his hand or fist on the island, in which the microphone was placed. Yes, that's what that thumping noise is that you'll hear periodically. I was able to dampen it in post-production but not remove it. But hey, Ryan is a passionate guy on some of the topics we discussed so it's all good. Hopefully the body language comes across in the final product.

Earlier in the week, Flames at 80 Decibels was added to iTunes and that milestone, which required the creation of an RSS feed, means it should now be available via your favourite podcast player or app. Here are a few of the more popular links to where you can download the latest episode:

Catching up On What You've Missed

The good news about summer podcasts is for the most part, they're all still very much relevant. After all, there hasn't been much Flames news lately. So if you haven't heard them yet and find yourself heading out on vacation and needing something to listen to, download the whole series. Here are links to summaries of what you'll find on each of the first three episodes:

This remains a work in progress technically, especially fumbling my way through post-production but I'm learning something new every podcast and I think they're sounding great. I appreciate your patience and thanks for listening!