Listen to that Purr: Flames Have the Offensive Engine to Drive into the Post-Season

So new. So clean. So shiny. 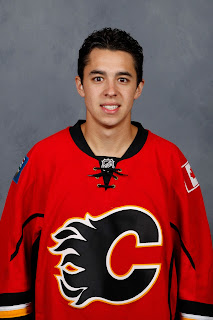 A look under the hood of the Calgary Flames reveals an immaculately-kept engine that would make any mechanic squeal with delight.

Playing the role of the camshaft, pistons, spark plugs and fuel injector are the young stars that drive this team -- Johnny Gaudreau, Sean Monahan, Sam Bennett and Dougie Hamilton. That purr when the key turns in the ignition is the engine version of that coveted new car smell.

In 2015-16, no NHL team got a greater offensive contribution from its youth than the Flames, who got a whopping 94 goals from players aged 22 and under. That's 41 percent of their overall goal production coming from kids who not that long ago just learned to drive.

Putting that 94 goals in context, it was five better than the 103-point, Atlantic Division-winning Florida Panthers.

Here is the top five. Note that this is strictly goals from players up until their 23rd birthday. So in the case of players such as Mark Scheifele and Brandon Saad, who turned 23 during the season, their listed goal total was what it was up until that point.

Honourable mention was Edmonton. Led by Leon Draisaitl (19), Connor McDavid (16), Ryan Nugent-Hopkins (12), and Nail Yakupov (8), Oscar Klefbom (4) and Darnell Nurse (3), the Oilers were sixth with 62 -- a number that would have been significantly higher if not for McDavid missing nearly half of the season due to injury.

As you can see, those 94 goals last year is a significant jump from 65 two years ago. But both of those numbers blow away anything we've seen in this city going back to 2000.

Painting a frighteningly bleak picture of where the team was at that time, that 2009-10 season was the start of five straight years of missing the playoffs. There's one thing to miss the post-season with young players just developing as was the case last year for Calgary. It's quite another to miss the playoffs with hardly any youth in the line-up whatsoever. 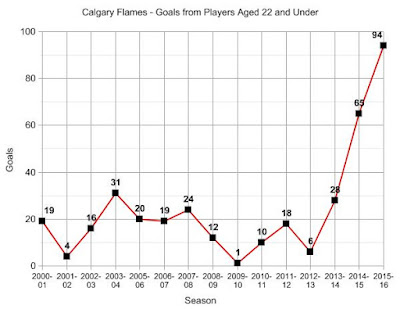 Higher first round picks and better overall drafting, as has been the case lately, is how you start accumulating premium talent like Monahan, Bennett and the budding stars in the pipeline that make up the Flames top 20 prospects.

The youth movement that has steadily grown over the past three seasons goes back to Monahan's draft year of 2013 in which the sixth overall pick has been the star of his draft class. Calgary has added at least one key offensive piece every season since. After Monahan made an immediate impact in 2013-14, Johnny Gaudreau joined the team in 2014-15 and Sam Bennett and Dougie Hamilton came on board last year.

Although actually, it's only six teams with three of the teams appearing multiple times.

As you can see, teams with such an impactful core of youth have generally gone on to be very good teams, if they weren't good already. Of course, there are two notable exceptions in the Oilers and Thrashers.

A breakdown of each of the 10 teams is below. Included are the goal scorers and how the team fared that year as well as in the next two seasons that followed. Were they able to build off it? Or did they bring in a new coach (e.g. Dallas Eakins), refuse to address the glaring positional need and end up sliding the opposite direction?

Before you ask, note that the top team on the list was the Oilers in the lockout-shortened 2012-13 season. I list them as No. 1 because their 71 goals from players aged 22 and under extrapolates out to 121 goals over a full 82-game season. That would have been the most.

The Skinny - After that 2012-13 season, the Oilers brought in Dallas Eakins to replace Ralph Kruger. That didn't work, nor did addressing defensive deficiencies by adding the likes of Anton Belov, Andrew Ference and Martin Marincin. Devan Dubnyk also struggled the next season and Ben Scrivens, brought in to replace him, was not the calibre of goaltending upgrade Edmonton needed.

The Skinny - With Dan Bylsma taking over for Michel Therrien, the Penguins went on to win the Stanley Cup that season, Pittsburgh increased its point total each of the next two seasons but exited early in the playoffs. In 2009-10, Pens blew a 3-2 series lead in the semi-final, losing games 6 and 7 to the Canadiens with Marc-Andre Fleury badly outdueled in net by Jaroslav Halak. The next year, Pittsburgh blew a 3-1 opening round series lead to fall in 7 games to the Lightning.

The Skinny - In the sophomore season for both Kane and Toews, Chicago reached the Western conference final. The next year, they improved to 112 points -- third best overall, and would go on to with the Stanley Cup. The year after, they were upset in the first round by the Canucks, who would go on to reach the Cup final before losing to Boston.

The Skinny - The first year together for Crosby, Malkin and Staal produced a 105-point regular season but the Penguins were upset in the opening round by Ottawa, who went on to reach the Cup final. But they bounced right back, reaching the Stanley Cup final each of the next two seasons, losing to Detroit and then beating the Red Wings the year after.

The Skinny - Coach Tom Renney had all sorts of talented youth up front but a D group of Tom Gilbert, Jeff Petry, Ryan Whitney, Ladislav Smid, Corey Potter, Theo Peckham and Andy Sutton just weren't good enough. The blue-line would continue to be a problem area in the years to follow.

The Skinny - Bruce Boudreau took over when Glen Hanlon was fired but more than just a coaching change was needed this season. Ovechkin, in his third year, was a one-man show with 65 goals, 39 more than Alexander Semin, who was No. 2. The Capitals just weren't deep enough. Plus, Olaf Kolzig had a poor year in net. But that changed and the influx of depth and better goaltending saw the Capitals see their point total rise significantly each of the next two seasons. In 2009-10, they won the Presidents Trophy by eight points.

The Skinny - It is a rare luxury to get a 1st overall pick, 2nd overall pick and 1st overall pick over a span of three years but that was the good fortune for the Penguins and they took full advantage. Back-to-back trips to the Stanley Cup final might well have been three straight trips if Fleury delivered the same calibre of goaltending in the playoffs as he did in the regular season in 2009-10.

The Skinny - Tons of youth up front led the Bruins to the second-best record in the NHL. They were also the second-highest scoring team. However, off-season moves by GM Peter Chiarelli forced by salary cap constraints included the trading away of leading scorer Phil Kessel for draft picks. That along with an injury to Marc Savard, contributed to a 25-point drop-off in the standings the next season. That year Boston was the second-lowest scoring team. But bolstered by the addition of Nathan Horton, a freshly-drafted Tyler Seguin and with phenomenal goaltending from Tim Thomas, Boston bounced back the next year to win the Stanley Cup.

The Skinny - Again, it goes to show how valuable it can be to have two high draft picks in consecutive years. Toews -- third overall in 2006 and Kane -- first overall in 2007, both played in their rookie season. The result was Chicago just missing the playoffs but their 88 points (after 71 points the year prior) was proof that they were on the rise. The next season in Joel Quenneville's first year behind the bench (taking over from Denis Savard after four games), they improved by 16 points and went to the conference final. They won the Stanley Cup the year after that.

The Skinny - It's yet another team that ended up big on future potential after stringing together three consecutive high draft picks in Patrik Stefan -- 1st overall in 1999, Dany Heatley -- 2nd overall in 2000 and Ilya Kovalchuk -- 1st overall in 2001. Halfway through this season, Bob Hartley took over as coach and the Thrashers ended up 20 points better than the year prior. However, their goaltenders had a league-worst .893 save percentage and didn't get much better the seasons after. The other key in the unravelling of the Thrashers was the car accident in September 2003 involving Heatley that killed teammate Dan Snyder. Heatley missed over three months the following season due to injuries from the accident. He was then traded during the 2004-05 lockout to Ottawa.

While the Flames young stars like Monahan and Gaudreau are not at that same elite level of a Toews and Kane, or a Crosby and Malkin, they have the ability to be the lite versions of both of those duos.

With a decent back-end led by Mark Giordano and TJ Brodie, Calgary does not have the same gaping holes on the blue-line that killed the Oilers. By bringing in Brian Elliott and Chad Johnson, the Flames have also addressed their goaltending, avoiding a repeat of what killed Atlanta.

They also are in good shape in terms of salary cap and an ability to keep all of their young stars for the next several years. In other words, the Kessel situation that forced Boston to retool will also not be an issue.

While historical comparisons guarantee nothing, Flames fans should be encouraged to see how the Blackhawks, Penguins, Capitals and Bruins all went on to enjoy tremendous success shortly after a season like Calgary just had in which youth played such a prominent role.

All of them made Stanley Cup appearances with that same cast except for Washington and the Capitals had the types of regular seasons that nobody would complain about.

Also, not to be forgotten, there is more youth on the way too.

While Gaudreau and Hamilton have now graduated from the 22-and-under list, Hunter Shinkaruk turns 22 on October 13. He looks like someone, who could contribute offensively before too long. Meanwhile, 2016 sixth overall pick Matthew Tkachuk, 18, could also be a guy that immediately contributes. At worst, he starts making an impact in 2017-18.

The core is there. Just surround them with better defence and goaltending and this Flames team could be going places and soon.