Looking to Rediscover His Scoring Touch, Klimchuk Spent his Summer on the "Fun Stuff"

One of these numbers is not like the others and it made for a long first pro season for Morgan Klimchuk. After sniping 30-plus goals in each of his final three seasons of junior including a career-high of 37 in 2014-15, the Flames prospect saw that total plummet to just three in his first pro season.

"Everybody wants to see guys score and generate offence but the reality of it is, there's a big jump from junior to the American Hockey League, so it was a transition for him," says Stockton coach Ryan Huska. "But along the way, I think he learned the game. He's now a guy that is reliable for us in a lot of situations." 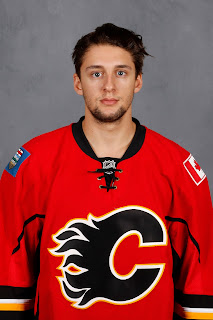 Putting an exclamation mark on his scoring woes, Klimchuk was blanked in his final 33 games last year, last lighting the red lamp on January 13. That was over eight months ago.

"I was little more focused on being a reliable, two-way guy last year and a guy that can be trusted on the ice and I kind of got away from putting the puck in the net," said the 21-year-old after Friday's morning skate at the South Okanagan Events Centre.

It made for an unusual summer. While for most young players, the typical refrain is they need to work on their defensive game and play away from the puck, Klimchuk's focus was on the "fun stuff" and his play with the puck and re-capturing his offensive touch.

"I used last year as motivation," said the 28th overall pick in 2013. "I knew what I had to work on and that's scoring goals and producing points. So throughout the summer, that's what I really focused on. Every skate, every day, doing little extra skills stuff. Having fun, being creative, that's a part of the game that you can't forget."

He realizes that the work he did last year was important, but now it's bring the other part of his game up to the same level.

"It's a pro game, you've got to do more than just put the puck in the net but on the flip-side of that, you can't just play good defensively, you've got to contribute on the scoresheet," he said. "I'm just looking to bring that part of my game back and it was fun to work on all summer."

He'll get a glorious chance to end the drought and get some of that offensive swagger back tonight.

When Calgary opens the Young Stars Classic tournament tonight against Winnipeg, Klimchuk will line up on the top line. The left-shooting winger will play his off-wing on a line with Mark Jankowski at centre and 2016 sixth overall pick Matthew Tkachuk on left wing.

"We don't lose sight of the fact that he can score," says Huska, who will man the bench all weekend in Penticton. "Coming down off his off-wing tonight, he's got a great shot and we're hopeful that Mark's vision -- how he sees the ice -- and the way Matthew is going to play tonight, will give him opportunities where he has a chance to finish."

Jankowski is excited about the trio's potential.

"They're both two, terrific players," said Jankowski, appearing his first rookie camp. "And Matthew is a good, hard gritty player. He knows how to get to the net and how to really win those dirty areas and those puck battles."

"I've skated with Janko a lot, he was in Calgary for most of the summer, and a bit last year in Stockton, and obviously Tkachuk is a pretty good player," he said. "I'm excited to see what we can do together. It's going to be a fun night."

This is Klimchuk's fourth and final rookie tournament as he'll be too old next year. He wants to go out in style.

"Been through this a few times now. It's a fun tournament," said the native Calgarian. "Obviously, we have some good, young players here. Guys that have a lot of energy and play hard. It's good intensity-wise. All the games are like that and everybody plays hard so I'm excited to be here and get going."

If Klimchuk can parlay his role tonight into some early success in this rookie camp, it's the kind of thing that can really snowball.

"If he gets off to a great start and he uses this tournament the right way, that's got a way of catapulting guys into some great things come main camp and eventually when the regular season starts," Huska says.

Getting back to his WHL norm of 30-plus goals is extremely doubtful for Klimchuk, but nor does he need to score that often to still have a successful season.

"I have good feeling about him. Whether that means he's going to get 10 goals or 25 goals, I do think he's going to take another step this year," says Huska.

"Everybody wants the offence, they all want these guys to put up numbers, but I think Morgan brings a little bit more to the table than just that. He's got the ability to turn himself into one of those good penalty killers. He's very responsible and reliable. He's put on size over the summer so he's going to be a guy that's stronger on the puck and harder to play against now."

Selected 22 picks after Sean Monahan, Klimchuk's longer ascent and recent scoring woes has made him a guy that one tends to overlook. But unlike so many one-dimensional high-scoring prospects that eventually disappear, if he can continue to develop his 200-foot game, there is plenty of room in the NHL for an all-round player like that.

Sometimes being not like the others is a good thing.