Penticton 2016: Looking to Make a Statement, Kenney Morrison Off to an Impactful Start

As was the case a year ago on opening night in Penticton, Flames defence prospect Kenney Morrison was once again a noticeable presence.

But with one critical difference. On Friday night, he was noticeable for all the right reasons.

"I have never seen Kenney play the way he played last night," said coach Ryan Huska. "He recognizes last year he got off to a slow start and he understood that when you do that, it's hard to catch up. He came in much more focused and prepared this year and he was very noticeable last night. He skated hard and he played with some edge."

A year can really change a guy's perspective. 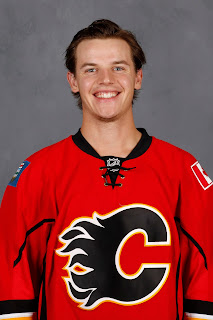 "Last year was an eye-opener," Morrison admitted Saturday after the Flames morning skate. "I took it for granted. This year, I'm here to make a statement."

He certainly did that in Calgary's 4-1 win over Winnipeg. In addition to being involved in the play all night, when the melee happened late in the third period that resulted in gloves and sticks littered all over the ice, it was Morrison that was the friskiest of the Flames. In defence of Matthew Tkachuk, he aggressively went after Brendan Lemieux two separate times, eventually wrestling him to the ice behind the net.

Morrison was assessed a fighting major and a misconduct on the play. In 54 career AHL games, he's never had a fight. Notably, this all came while his defence partner Keegan Kanzig, a noted pugilist, looked on.

"I wouldn't say it's my style, but when teammates need help, all five guys have to go in and help," said Morrison. "It's good to come out of your comfort zone and show them that you're willing to do what it takes. Being a good teammate out there helps out and you get a lot more respect from your teammates too."

It made for an impactful night in which the right people took notice.

"He's coming in to get his season off to a great start and to make an impression on a lot of people and let them know that last year wasn't the real Kenney Morrison," said Huska.


Back in Against the Oilers

Morrison draws back in the line-up again Saturday night against Edmonton, this time paired with big Belarusian Stepan Folkovsky. Huska hopes to see that same level of intensity from the 24-year-old. Because of his age, Calgary had to get permission from the other three teams to bring him to the Okanagan.

"When players are engaged in a game, they're better. If you're never finding yourself in that battle, you're often standing on the perimeter and you won't really affect the outcome of a game. Last night, he was involved in it, he was in the guts of it," Huska said.

"It doesn't mean that he has to fight. It doesn't mean that he's going to blow people through the boards but when you're involved in the game, it forces you to be sharp with your details and your compete level and when guys are engaged like that, nine times out of 10, you're going to get a much better effort."

Last year, his struggles in Penticton stuck with him the first half of the season.

"I didn't have the best start going into my first pro season," he conceded. "I was the seventh defenceman for a couple months and it was more hard mentally than anything. Here we were at the start of the year and I had never been sat out of games before. That was tough."


How Quick the Landscape Had Changed

Eighteen months ago when Morrison left Western Michigan University after his junior year to sign a two-year contract with the Flames, one of the reasons the native of Lloydminster, Alberta, selected Calgary to sign with was because of the opportunity. The depth chart at the time was thin, especially in terms of right-shooting defencemen.

Little did he know the blueline situation was about to change and change drastically. Two months later, Calgary signed right-shooting Jakub Nakladal, three months later, they traded for right-shooting Dougie Hamilton, then at the draft, they used their first two draft picks to select defencemen -- Rasmus Andersson, another righty, and then Oliver Kylington.

It was the presence of Nakladal and Kylington in Stockton last year that led to Morrison frequently finding himself in the press box over the first few months.

It wasn't until the new year that he eventually became a regular. More playing time led to better play.

"When you're playing every game, you have more confidence and you're not scared to make mistakes. You're going out there and you're trying that extra move and playing with your head up more," Morrison said.

The question is can he use Friday night's effort as a springboard and continue that elevated level of play.

"Every year there's a new guy coming from behind. Unless you're willing to push and be better and put in extra time or extra work then other guys, you get left behind," said Huska. "I'm happy with the way he's started and now the big challenge is the way he finishes this weekend."

Highly touted when he was signed, Morrison has slid off the radar for many. But it's a new year and a fresh start and if he can continue to play at the level he did Friday, he'll be back on that radar in no time.

With a bunch of expiring contracts coming up on the back end, the timing for a bounce-back season could not be better. Much like when he signed, opportunity looms once again.