Q1 Awards: Best and Worst Performances From the First Quarter of the Flames Season

With the Calgary Flames 8-12-1 at the one-quarter mark of the regular season and sitting in fifth in the Pacific Division, here is a look back on the good, the bad and the ugly from the first six weeks.

The 28-year-old Czech has gotten off to a terrific start as the club leader in goals (6) and points (14). He also has two shorthanded goals as well as an OT goal, Still getting the tough assignments defensively, he and linemate Mikael Backlund have been terrific together, especially shorthanded where they've been dangerous. A third line player to start the season behind the Sean Monahan and Sam Bennett lines, Frolik's line has been excellent, looking more like the club's No. 1 line most of the year.

2. Mikael Backlund - Playing like a No. 1 centre, he's second in shots with 50, a sign that more offence will come.
3. Chad Johnson - A nice back-up plan is looking more like a starter. Has outplayed Brian Elliott.

Selected to play for Team North America in the World Cup of Hockey, he had to pull out with a strained back that lingered on, limiting him to just one appearance in the preseason. He's never really got going. An average skater at the best of times, he looks slower and isn't having nearly the impact he has had in his first three NHL seasons. The struggles come in year one of a seven-year deal with a cap hit of $6.375 million.

2. TJ Brodie - League-worst minus-13. Rocky start for a guy that has been one of the NHL's best kept secrets.
3. Johnny Gaudreau - Struggled big time his first 14 games before finally turning the corner. Then he broke his finger.

Through the preseason, Bennett-Troy Brouwer looked like a deadly combination and that carried into the regular season as did their production. However, that chemistry dried up and eventually the line was broken up. Bennett spent the past three games on left wing, a temporary move made more permanent with the Gaudreau injury. Discipline has been an issue. Ranks second in the NHL with 14 minors (Evgeni Malkin, 16) and has twice been benched by the coach as a result.

2. Jyrki Jokipakka - Touted as a potential No. 4 D, he's spent much of the last few weeks as the No. 7.
3. Hunter Shinkaruk - Hasn't taken advantage of his call-up. Three meh games then was scratched for three.

Bounced between lines for the first few week and then after a game or two on the fourth line, he was a healthy scratch for two straight. But upon his return, he was tried on left wing with Backlund and Frolik and those three have been terrific. Known for their tough deployments as a line, it's unusual for so much defensive responsibility to be heaped upon an 18-year old but Tkachuk is smart, Gulutzan loves how he manages the puck and he'e earned an NHL job when many had him pegged to return to junior.

2. Micheal Ferland - Physical but clean and has decent hands. Improved consistency has been the key.
3. Matt Stajan - Is rejuvenated and his solid, intense all-round play has earned him more ice time. 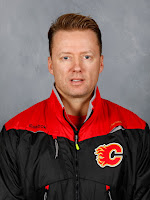 Create more shot attempts at even-strength than your opponent -- only measured while the game is "close" so teams are not playing desperate (trailing by multiple goals) or safe (leading by multiple goals) -- and you get what typically is a good predictor for future success. The Flames finished 28th in SAT% Close two years ago and 26th last year. This year, with a greater focus on this area under Gulutzan, they have been much better. As of this morning, they sit 14th at 50.45 and were as high as 10th last week.

2. Frolik-Backlund - Gaudreau-Monahan and Brouwer-Bennett have fizzled, but this pairing has been terrific.
3. Veterans Rejuvenated - While top players struggle, depth guys like Deryk Engelland and Stajan have thrived.

An unmitigated disaster once again. The power play is last at a meager 8.4 percent while the penalty kill is 29th at an ugly 72.7 percent, only ahead of the slow-starting Blackhawks (68.2 percent). When you've scored the fewest PP goals (6) and given up the most PP goals (21), you're killing your chances of winning with any regularity. In six of seven home losses, Calgary was within one goal into the final 90 seconds. In those six close defeats, the Flames were 0-for-23 on the PP while the opposition went 9-for-22.

2. Coach Transition Pains - Slow starts are common for most new coaches, but it doesn't make it any less painful.
3. Home-Ice Record - Season ticket holders are understandably frustrated with a 3-7-0 record at the Dome.

Having just been smoked by St. Louis at the Saddledome three days earlier, it didn't bode well for Calgary as they visited the Scottrade Center on the back-end of back-to-back games. As it was, it is a building the Flames have rarely won in lately. But Dennis Wideman and Engelland scored in the first period, then Bennett scored early in the second to make it 3-0. Outshooting the Blues 23-11 after 40 minutes, the Flames cruised to the win with Elliott making 23 saves for wins on consecutive nights.

Outshot 39-24, outscored 5-0 -- all at even-strength, this train wreck on a Saturday night at Staples Center was arguably the second ugliest defeat in the team's 2,800-plus games regular season history. The only other time Calgary was shut out, gave up five-or-more goals and were outshot by 15-or-more was that infamous 9-0 loss to Boston on Jan. 5, 2012. It would turn out to be the last NHL appearance for Nicklas Grossmann, who was waived three days later and eventually had his contract terminated.

Calgary had been the better team but trailed 1-0 in the third period to a red-hot Mike Smith and the Coyotes when off a face-off deep in the Arizona end, Tkachuk got the puck just above the goal line and ripped a shot that beat Smith over the shoulder. "One heck of a shot," said Gulutzan after the game. "There wasn't any room there. He made a big play." That goal at 6:40 helped get the game to overtime where Frolik notched the game-winner.

2. Gaudreau vs Minnesota - Gaudreau fends off three back-checkers and multiple slashes before tucking in a back-hand.
3. Engelland vs St. Louis - Kris Versteeg's saucer into the slot is buried by Engelland after a dandy dangle.

When acquired on the day of the draft in exchange for the Flames second round draft pick, Calgary's goaltending issues were supposed to be solved. But the 31-year-old hasn't displayed the calibre of goaltending that was expected and what most people had witnessed from him over the last five years. Sure, he's faced lots of odd-man rushes but he isn't making any of those 'big' saves. Lately, he has been giving up one bad goal per game and that has hurt the club. The good feelings from his three-game win streak have passed.

2. Troy Brouwer - A bright spot the first two weeks, chemistry with Bennett has faded and so has he.
3. Nicklas Grossmann - Three games was enough to confirm his foot speed made him a serious liability.

11. Worth the Price of Admission

Gnawing all the time on that mouth guard, Tkachuk is a shit-disturber and that's the exact ilk of player the club badly needed. He's in the middle of skirmishes all the time, a sign that he's getting under the opposition's skin. Now sometimes -- maybe too often -- he is the guy that ends up in the penalty box but he also draws a lot of penalties from frustrated defenders. A fan favourite already, he's learning to play on the edge but within the boundaries. Meanwhile, he's been a great fit with Backlund and Frolik.

2. Micheal Ferland - Using his size very effectively. He hits, brings energy, wins puck battles.
3. Garnet Hathaway - Banger-and-crasher, who for a 4th liner has spent a lot of time in the offensive zone.

While there were some other factors behind why Grossmann signed at the number he did -- allowed the Flames to maximize their cap relief when they put Ladislav Smid on the IR -- the signing itself still seemed strange from the outset. With the NHL another year quicker, Grossmann's wheels were always a concern. As stunning as him getting a one-year, one-way deal was, playing him opening night against the quick Edmonton Oilers will surely go down as a regret for Gulutzan.

2. Linden Vey on Power Play - In a puzzling move, he replaced Gaudreau on PP instead of Frolik, the team's leading scorer.
3. Lack of Discipline - Was shorthanded the fewest times in the NHL in 2014-15. This year they've been on the PK the second-most of anyone.

It was back on podcast No. 4 with PostMedia columnist Scott Cruickshank when he described each new Flames season as like a new book. I love that way of looking at it. He said from one year to the next, you never know what is going to happen, there will always be unexpected surprises, and that's what makes it so much fun to chronicle for those around the hockey team.

It probably hasn't been a whole lot of fun for fans to endure but it has been a season of non-stop storylines and from my perspective, it's made for a very interesting season. Just think, another four and a half months to go in this latest 'Choose Your Own Adventure' story.

After four consecutive good outings, Calgary took a step (or two) back against Buffalo on Monday. Now what? Will the tailspin continue for a few games or was that Sabres game just a blip?

It's really difficult to get a feel for this team so I guess we'll have to just sit back and watch. Over the next 20 games, one thing for certain is I would expect no stop to what's been a roller-coaster of emotions so far for fans. You might want to pop a couple Gravol before the action continues Wednesday at Nationwide Arena in Columbus, Ohio.