Sixth in league scoring as a sophomore with 30 goals and 78 points, you knew Johnny Gaudreau was going to command a lot of respect this season. 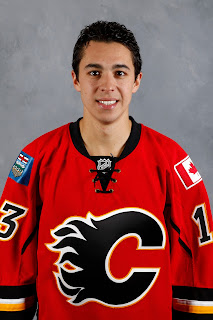 Tuesday night at the Xcel Energy Center in Saint Paul, Minnesota chose to recognize the diminutive Flames star with a 21-slash salute, the hockey version of one of the military's highest honours.

Usually reserved for military or state funerals, the 21-gun salute is when a cannon or some form of artillery is fired 21 times into the air. It comes from a naval tradition of ships firing all unspent ammunition into the sea to show that it is unarmed and signify a lack of hostile intent.

Lack of hostile intent? Right. Might want to check in with Christian Folin, Ryan Suter, Jason Zucker and the rest of the Wild involved in that stick-swinging performance.

While Gaudreau is not dead as the metaphor goes, the Flames playoff chances sure will be if the first line left winger is lost for an extended period of time. Seen earlier examining his left hand or wrist, Gaudreau left the game eight minutes into the third period and did not return.

The 'tribute' began five minutes into the game on Gaudreau's third shift, in which he also produced the game's only goal.

As he carried the puck in on a zone entry during a Flames power play, Mikko Koivu took the first swing.

Shortly after, sprung on a breakaway from the blueline in on a bullet pass by Mark Giordano, Gaudreau fended off a six-pack of stick-work from three Wild players in pursuit in deftly slipping a backhand past Devan Dubnyk.

First it was Folin reaching his stick in, then came two desperate swipes at the puck from Charlie Coyle that both rode up the shaft of his stick and into the hands region. Then came the serious stuff, two much more solid chops from Folin and a last-ditch flailing by Jonas Brodin that caught him more on the hip after the puck was already off the stick and bound for the open corner.

Next shift came another slash although this one more a run-of-the-mill hockey play that happens when you're battling -- a soft one-hander to the hands from Erik Haula.

Two shifts later came another one, this one with some venom. While Gaudreau was positioned in front of the Minnesota net without the puck, Suter delivered a hard whack to the hands.

Then it was time for Zucker to perform a solo act.

It began with a swipe at the hands by the Wild left winger. Next shift came three more. First, a more purposeful swing at his hands as Gaudreau ducked behind his own net. On the ensuing rush up ice, Zucker delivered two solid whacks on the left glove as he chased him.

Now to be fair, Gaudreau delivers his shares of slashes through a game too, especially on a forecheck. On this occasion, he takes a swipe at Suter deep in the Minnesota corner, who then returns the favour by whacking him right back as they both head up ice.

Into the second period now, it's Suter again. As Gaudreau skates through the slot without the puck, it's another whack to that left hand. This one stings noticeably as he gives his glove a shake right after.

Back on the power-play in which a string of penalties with a TV time-out mixed in resulted in a lengthy 2:51 shift for Gaudreau, the slashes began once again on zone entries as the Flames do their usual and make a drop pass to Gaudreau, who charges over the Wild blueline with speed, but right into the line of fire each time.

Mikael Granlund gets him with a one-hander. Next approach, it's Koivu with a similar one-hander.

Playing four-aside, it's Suter again, this time chopping him as Gaudreau darts through the neutral zone and then for good measure, mugging him with his glove and hauling him to the ice for a well-earned interference penalty.

Back on the man advantage and still on this lengthy shift, Eric Staal delivers a two-hander to the gloves. Again, Gaudreau shakes his hand.

Into the third period, it's another encounter with Folin. Skating through the neutral zone and again without the puck, the Wild defenceman stands him up with a cross-check into the same hands and wrist area. Gaudreau turns immediately turns and heads to the bench.

Lastly, on shift 17 for Gaudreau, it's one more whack into the hands, this one by Staal finishes his night.

There are apparently two problems with our hands and wrists when it comes to the NHL justice system:

If so, maybe the increase in stick-work that Gaudreau (and other star forwards, to be fair) seem to be subject to these days wouldn't be an issue.

What I mean by this is when are slashing penalties most often called? When a player's stick is slashed. It's as if every broken stick comes equipped with a chalk outline and a roll of police tape.

All the time, it is the outcome in which the severity of the crime is decided. No matter how soft of a slashing motion it may be, it seems that any slash to the stick is an automatic penalty if either the stick is knocked out of a player's hands (see Garnet Hathaway last night) or if the stick breaks.

Of course, the flaw with this line of thinking is the frequency in a game in which sticks will just shatter on their own when hardly touched or sometimes not even touched at all. With the composite stick material compromised from an earlier incident(s) -- maybe a skate blade went over it, or from normal wear and tear -- we've all seen sticks explode in the shaft when doing something as simple as receiving a pass, preparing to shoot or just taking a face-off.

Meanwhile, all the time, whacks and slashes that make direct contact to the 27 bones that make up the human hand and wrist are often shrugged off. If only X-Ray vision was a real thing and not just in comic books. Is this what it's come to? The NHL is more concerned about $250 hockey sticks than the million dollar hands of its star players?

As of early Wednesday morning, there is no word yet on Gaudreau's condition. Safe to say all Flames fans as well as the entire organization are collectively holding their breath.


Flames say official timeline will be announced in a few days, but initial rumblings are 4-to-6 weeks https://t.co/arx9o6pzhg
— Elliotte Friedman (@FriedgeHNIC) November 16, 2016


Think about it. A broken wrist, for example, could sideline him for eight weeks. Lose a $6.75 million hockey player like Johnny Hockey for two months, or one-third of the hockey season, and you may as well attach a $2 million price tag to the slash that got him, and it went unpenalized. That's the equivalent of 8,000 broken hockey sticks.

And don't kid yourself, a long-term injury to Gaudreau doesn't just hurt his own team, it hurts the league. Calgary is three days away from departing on a six-game Eastern road trip with once-a-season stops in Detroit, Buffalo, Columbus, Boston, Philadelphia and Brooklyn. That's a lot of big hockey markets and would be a huge missed opportunity for the NHL to showcase one of the most exciting players in the game.

It's time for the league to get its priorities straight and forget about the slashing of sticks, but crack down on the slashing of bones, or expect teams to take protection into their own hands.

Heck, if you're the Flames, you should anyway. Teams need to know that it's not OK to take liberties on your marquee player. Micheal Ferland, Garnet Hathaway, Troy Brouwer, Sean Monahan and others, this is a responsibility the entire team should share.

Because without Gaudreau's silky-smooth hands in the line-up, you can forget about the post-season. If that happens and it results in another disappointing year, it will be disgruntled fans that will be delivering the next salute and it will be comprised of slashes also, as in how much of their income they're prepared to spend on season tickets.