When Johnny Gaudreau was lost with his broken finger in Minnesota on November 15, coach Glen Gulutzan said the team would need somebody else to step up. Turns out, one Johnny goes down, one Johnny rises up.

Starting that same night when Chad Johnson stopped all 27 shots in a 1-0 win over the Wild, the 30-year-old has been on an absolute tear. Here are eights facts, figures and observations about Johnson, compiled after his most recent masterpiece, a 39-save shutout of the Toronto Maple Leafs on Wednesday night.


My take from the Dome as a fast start and another impressive outing from Chad Johnson resulted in a 3-0 #Flames win. https://t.co/zeqYAxrw88 pic.twitter.com/92nhe5uTw7
— Darren Haynes (@DarrenWHaynes) December 1, 2016

1. I don't recall in recent memory a Flames goalie being on such a tear. Over his last 16 days, going back to that starting assignment in Saint Paul -- his first game action in nine days -- Johnson has started eight of 10 games. Over that span, he has been lights-out going 6-2-0 with a 1.50 GAA, .951 SV% and 3 shutouts.

2. Just seven weeks into the season, three shutouts is a career high for Johnson. He had two in 27 games in 2013-14 with the Boston Bruins while being the caddy for Tuukka Rask.

With his sixth NHL organization in the last six years, Chad Johnson entered the season with four shutouts. He has three in the last 16 days.
— Darren Haynes (@DarrenWHaynes) December 1, 2016

4. League wide, Johnson's three shutouts are tied for second. It's one less than Devan Dubnyk, but one more than the likes of Carey Price, Corey Crawford and Martin Jones.

5. Last Flames goalie to record three shutouts in a season was Miikka Kiprusoff. That was five years ago in 2011-12 when the Finn had four shutouts in 70 games. Johnson has three in 13 games. Last year, Calgary had just three as a team -- one each for Karri Ramo, Jonas Hiller and Joni Ortio.

Last Flames goalie not named Kiprusoff to record three shutouts in a season was Roman Turek (4) in 2003-04.

6. As good as he's been in the latter half of November, getting some league-wide recognition when the NHL's three stars of the month are announced later this morning will be tough. Nashville's Pekka Rinne and Montreal's Carey Price have also been excellent: 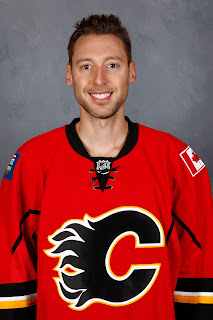 7. On the season, here's where Johnson sits among the NHL leaders (minimum of 8 games, 44 goalies qualify):

Focus in on the period starting November 15 and he has been elite:

8. As noted on the weekend in this piece, this is a larger sample size than most fans realize also. Going back to November 1 of last season -- so that's a period of 13 months -- Johnson has the best save percentage in the league behind only Carey Price.

That's pretty impressive stuff and for skeptics, that's a 49-game sample size too. Not bad. Plus, with the Buffalo Sabres and now the Flames, he's hardly doing it while playing behind an ironclad blueline.


As condensed as the Flames schedule has been lately -- November ended with 10 games in that much talked about 16-day span including three back-to-backs -- a flipping of the calendar finally sees the team get a little bit of room to breathe and rest.

In the first 18 days of December, Calgary plays only seven times with no back-to-backs. While Brian Elliott was good in Long Island in his last start, it makes one wonder when Johnson relinquishes the crease again. It may not be for a while and it would be hard to fault Gulutzan for riding the hot hand.

Since signing his entry-level contract on July 18, 2009, after completing four full seasons at the University of Alaska-Fairbanks, Johnson has had nothing but short-term deals. Here's the year-to-year breakdown of his NHL annual average value over his career:

Per Cap Friendly, Johnson is the 36th highest-paid goalie in terms of AAV this season. As we near the one-third mark in the season, he is certainly making a case to climb up that list significantly for next season and maybe, just maybe, finally sign a deal that gives him some security.

Is Calgary, the same city he grew up in and played his minor hockey, finally a place where the Bow Valley minor hockey association grad can hang up his jacket and stay a while? Sure looks like it.

The Flames need a goalie for at least one more season and signing one for 2-3 years would be prudent as they continue to groom top prospect Jon Gillies in the minors. While four months ago, one would have assumed that choice would be Elliott -- also on an expiring contract -- Johnson has certainly changed the conversation.

It's been fun to watch and for a guy labelled a career back-up, who has had to fight through that, all the credit to him.