Not the Solution, But Beats the Alternatives: One Man's Perspective on Garnet Hathaway 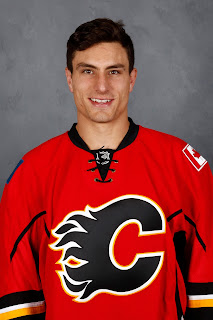 Now to be clear, I don't think anyone in their right mind is crediting Hathaway alone for Calgary's six-game winning streak earlier in December. I'm certainly not. Chad Johnson's stellar play over that span might have had a hand in it. That guy that wears No. 13 and has the puck all the time, he may have played a small role. Sean Monahan's career-best offensive spree likely factored in also. Then there's young Matthew Tkachuk, a rejuvenated Dougie Hamilton and yada, yada, yada.

Nor is anyone pinning Monday's 4-1 loss in San Jose on the absence of Hathaway. They went into a tough building against the defending Stanley Cup finalist on the back end of back-to-back games and got thoroughly outplayed and lost. So did Anaheim last night in the same circumstances, getting pumped 5-1 in Montreal. It happens. Don't overthink it. The Sharks are the best team in the Pacific Division.

But what you can't argue is while not possessing the same offensive tools as Tkachuk, Hathaway packs many of the same agitating qualities that everyone effuses about when referencing that part of Tkachuk's game and there's something to be said about that.

It's also important to put the discussion into proper context because you have to be cautious in overvaluing the role that fourth line grinders, pluggers and muckers play in wins and losses.

The debate -- and apologies to fans for re-opening an old wound -- is not whether to play Hathaway or a guy like the speedy and skilled Paul Byron on the fourth line. The decision for Glen Gulutzan these days has come down to Hathaway or Lance Bouma. That's what we're talking about here.

Without getting into all the data points, the argument the advanced stats disciples will raise is it should be Bouma because he produces more shot attempts in his ice time compared to Hathaway.

But how much more?

Is it a tangible enough difference in the nominal minutes he would play on any given night to offset the other non-measureable attributes that Hathaway brings such as an ability to get under the skin of the opponent and often their better players -- see Max Domi, Dustin Byfuglien. I reference shot attempts (Corsi) occasionally and I understand their value so please do not portray me as turning this into a stats versus eyeball debate and choosing sides. But I do know those other qualities are useful too -- and so does Brent Burns.

The prolific Sharks defenceman said as much the last time the Sharks and Flames met at the Saddledome, a game in which he was first introduced to Hathaway.

That game was last March, eight days into Hathaway's NHL career and Burns had some high praise for the rough-and-tumble native of Kennebunkport, Maine, who has the jersey number befit of a football linebacker and plays like one too.


Brent Burns on Garnet Hathaway: "What did he draw, five penalties tonight? He plays hard. Those are guys that you want on your team."
— Darren Haynes (@DarrenWHaynes) March 8, 2016


Well, Hathaway is on the team, but he wasn't in the line-up Monday and the result was the same as the previous two times he watched a game from the press box -- a Calgary loss.

Better Off With Him, Than Without Him

When Calgary and San Jose met at the SAP Center earlier this season, Hathaway was playing down the interstate in Stockton and was not an option.

The Flames lost their next four games and 10 days later Hathaway was back in the NHL. He made his season debut that night in Minnesota in which the Flames began their current 12-6-1 run that has got them back in the Western Conference playoff hunt.

The team's record over that period when Hathaway plays? Even better at 12-3-1.

I would agree there is more co-incidence than correlation in those numbers. In addition to the likes of Johnson, Gaudreau, Monahan and Hamilton all stepping up over this period as mentioned, there's been the better overall system play under the new coach, vastly improved special teams and the schedule has been comparably easier also.

But right now, the question is does Hathaway bring more to the line-up than NHL roster alternatives like Bouma or Freddie Hamilton? For me, he does.

If you're partial to having speed and skill on the fourth line instead, those guys have had their chance too but with meh results.

Stockton's top two goal scorers are Linden Vey (8 goals in 20 AHL games) and Hunter Shinkaruk (7 goals in 14 AHL games). Both had stints with the big club this season and didn't generate much -- and much of that time came playing in the top nine. If they're not producing when alongside skilled players, is their past offensive ability going to transfer in a fourth line role? Them being in the minors right now probably answers that question, or at least how Flames management sees it.

Also, it might be a little early to dismiss Hathaway as a construction worker dressed in a hockey uniform.

He did put up 19 goals in his pro season two years ago, which tied him with Emile Poirier for second on Adirondack (AHL). It was a better clip than Sven Baertschi.

His four points (one goal, three assists) in 15 NHL games this season is nothing to scoff at either. That extrapolates to over 20 points over 82 games. It's not a bad return on investment for a guy carrying a nominal cap hit of $690,000 that isn't much above the NHL minimum, and who is averaging just over nine minutes per game.

As I see it, Hathaway is not going to be a guy that will ever get 'Lance Bouma money'. Again, sorry for shaking a little more salt in an old wound. And maybe he's more of a 14th forward than a 12th forward when this Flames team evolves into a group expected to make the playoffs, and not just a playoff hopeful like this year.

But for now, is he a better option than current NHL roster alternatives or other potential options in the AHL? I'd say so.

The way the NHL is evolving with the salary cap with most money tied up on your top players, affording four lines of legitimate skilled players is going to be next to impossible anyway. At some point, the skill (see Vey, Shinkaruk) isn't going to be prevalent enough to trump the qualities brought to the rink by other so-called energy guys.

If Hathaway is willing to continue to play for cheap, there should continue to be a role for him on an NHL roster. Or at least he can play on my team anyway.