For Matthew Tkachuk, he finds himself sandwiched in the NHL's top five by some elite company.

The two guys ahead of him, Pittsburgh's Phil Kessel and Evgeni Malkin, are earning a salary of $9 and $9.5 million respectively to help set-up Sidney Crosby. The two guys behind him are league-leading scorer Connor McDavid and Washington centre Nicklas Backstrom, who brings in a cool $7 million for often riding shotgun with Alex Ovechkin.

This group I'm referring to are the NHL's top five playmakers over the past two-and-a-half months.


While Oct. 25, a night that came 13 days into the regular season, may appear to be a pretty random pull, it's actually not.

That evening in St. Louis, against the team his dad Keith played for from 2001 through 2010, was the first game Tkachuk was inserted onto a line with Mikael Backlund and Michel Frolik.

Prior to that, the 18-year-old had been a healthy scratch for two games, a curious decision by Glen Gulutzan that had raised some eyebrows. The coach defended it by calling it part of the organization's development plan for Tkachuk, who had dressed for each of the season's first five games and averaged 11:55 in ice time. His one point up until then had been a goal.

Watching the game from a different vantage point certainly worked.

Since his brief press box hiatus, he has been a fixture on that line and they've been the club's No. 1 line without question.


You could also argue they've been one of the best and most consistent trios in the entire NHL.


While the Caramilk secret remains a mystery, the #Flames secret does not. Backlund, Frolik, Tkachuk, repeat.
— Darren Haynes (@DarrenWHaynes) January 12, 2017

It was a few minutes past midnight Eastern time on Wednesday night when Dougie Hamilton fired in the game-winner late in the third period of a huge 3-2 victory over Pacific Division-leading San Jose. 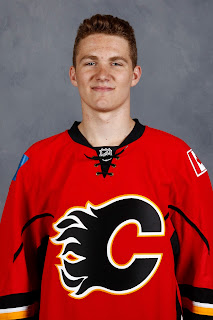 With Tkachuk in his usual parking stall just outside the top of the goal crease, Hamilton's shot eluded goaltender Aaron Dell.

As the guy providing the screen, Tkachuk was instrumental on the goal that earned Calgary two points against last year's Stanley Cup finalists. But you would never have known it if you woke up Thursday morning and skimmed the game summary.

Officially, Hamilton from Mark Giordano and Backlund is how the goal went down. Unofficially, Tkachuk was key in making that goal happen, just like he played an integral role on the team's first goal by Frolik that he earned an assist on, as well as the pivotal Flames second goal in the final minute of the second period that tied it, which he scored himself on a deflection.

The late-night heroics aren't new either.

It was around 12:30 a.m. Eastern on Saturday night when Tkachuk's outstanding pass sprung Frolik on a breakaway, the goal with 1:50 left in the third securing a 3-1 victory over the Vancouver Canucks.

That set-up extended Tkachuk's point streak at the time to nine games, longest by a rookie this season and longest in club history since Joe Nieuwendyk's 14-game point spree in 1987-88.

But out East where a majority of the Professional Hockey Writers Association voters reside for the NHL awards, is anyone staying awake long enough to take notice of what Tkachuk is doing? You sure hope so. For those that are, the eyes are surely wide open as just watching him play is like a jolt of caffeine.

While much ballyhooed Toronto star Auston Matthews and Winnipeg phenom Patrik Laine have dominated Calder discussions so far and for good reason, remember that there are three finalists for every award and that includes rookie of the year. While I agree those other two guys should be shoe-ins -- and one of them is most likely to win it, Tkachuk is someone not nearly enough people outside Calgary are talking about. At this point, he is worthy of a podium finish.

Mitch Marner from the Leafs is naturally getting a lot of love. So is his Toronto teammate William Nylander. Columbus defenceman Zach Werenski has been a huge part of the Blue Jackets stunning first half success, Detroit winger Anthony Mantha has been piling up points lately and in net, you have the stellar play from Pittsburgh goaltender Matt Murray.

But don't sleep on Tkachuk and Eastern voters, I mean that literally. Don't forget about the kid stuck out West in the mountain time zone that has been tremendous.


Not reflected above but not to be glossed over is Tkachuk is averaging three minutes less in playing time compared to Matthews and nearly four minutes less than Laine.

Go back once again to when Tkachuk joined the Backlund-Frolik line and factor in ice time and you get the same names but in a different and intriguing order.


Of course, here we are halfway through the article and two of the most compelling aspects of Tkachuk's overall game have yet to be tagged and entered into the courtroom as evidence.

First, you have the fact that Tkachuk is putting up all these assists and points while playing left wing on the Flames No. 1 shutdown line.

This is a line that Gulutzan continually sticks on the ice against other team's top lines. Their first priority is making sure the line they're up against does not score. The most difficult line match-ups on most nights goes to these three guys. While Backlund and Frolik are veterans who are used to that role, that's a boatload of responsibility to heap on the shoulders of a kid that just turned 19 in December, yet he's handled it remarkably well.

Advanced stats reveals that despite the tough assignments, that line is carrying the play when they're on the ice. Known officially by the NHL as SAT% (shot attempt percentage), but better known by terms like Corsi and possession, this number is a ratio that reflects the volume of shot attempts by a team while a player is on the ice at 5-on-5, compared to shot attempts against.


The additional number that really pops for Tkachuk is the zone start percentage (ZS%). With everyone on this list other than Tkachuk at No. 7 and Jordan Staal at No. 10, more often than not and sometimes way more often, those players come on the ice at 5-on-5 when there's a face-off in the offensive zone.

For Tkachuk, it's completely the opposite.

It's an indication that Gulutzan trusts him and his line more than anyone else to get the team out of a jam.


One of the NHL's Best Antagonizers

Another attribute of his game is his ability to get under the skin of the opponent.

In a statistic that speaks volumes and is testament to Gulutzan's favourite compliment that he pays to Tkachuk regularly in that he's "always in the fabric of the game", Tkachuk (76) ranks third in the league in penalty minutes behind Dallas agitator Antoine Roussel (87) and Toronto pest Matt Martin (77). That said, he's drawn more penalties than he's taken.


For lack of a better description, this guy is a shit disturber in the truest sense. He is always around the front of the net and wreaking havoc. A late shove, a little whack in the leg, some barking, stealing Brent Burns' stick, he excels at getting the opposition defenders off their game and he is going to be universally hated around the league in no time.

A guy you love to have on your team but hate to play against, name the last time the Flames had a guy that fit that description.

It's been a void missing for decades and it's why the Flames were delighted to see the stars align and be able to land Tkachuk at No. 6 in the NHL Draft last June.

Getting to watch him on a nightly basis, there is a great appreciation in Calgary of the many elements of Tkachuk's game. With hockey 'in his blood', having grown up around it with his Dad, he is a quick study that has earned everything he's gotten this year. He continues to be one of the team's top players.

His shot isn't bad either as Arizona goaltender Mike Smith can attest. You may remember the bullet he put under the crossbar from a sharp angle late in the third to beat the Coyotes on Nov. 16.

His beyond-his-years hockey IQ, defensive smarts and puck management earned him a spot on Calgary's shutdown line and has kept him there.

His ability to piss everybody off yet more often than not, put his team on the power play, is a skill you can't teach.

Has he been boosted by the tremendous seasons being enjoyed by Backlund and Frolik? Certainly. But don't discount how much Tkachuk has helped their game also. It's a two-way street.

In two weeks, the Flames make their way out East for stops in Toronto, Montreal and Ottawa.

Heads up voters, with Calder votes due in a couple months, this is a guy to watch and in person if you have the chance. Don't forget about him after he leaves town either. Heck, a few late nights watching the Pacific Division won't kill you. You can always sleep-in during the summer.