Late-Season Meaningful Battle of Alberta: Saturday is the First One in Nearly Eight Years


The Flames and Oilers in a meaningful hockey game in January. It hasn't happened very often.

In fact, tonight when the two sides clash at Rogers Place will be the first time in nearly eight years that Calgary and Edmonton have met this late in the season with both teams in a playoff spot.

The last time the provincial rivals met in that type of setting was at Rexall Place on Saturday, Feb. 21, 2009.

As astonishing as that sounds, it's also not all that surprising considering not very often in the last two-and-a-half decades have both teams been good at the same time. Only once in the last 25 years (2005-06) have both have made the playoffs in the same season.

To give you a sense of how long ago the last late-season meaningful Battle of Alberta was, not one player that appeared in the last one remains with the team today, or at least not in a playing capacity.

Going into that showdown -- game No. 59 for both teams -- Calgary (34-18-6) sat atop the Northwest Division with a comfortable eight-point lead on Vancouver. Twelve points back of the Flames and clinging to the final playoff spot in the Western Conference was Edmonton (29-25-4). By clinging, I mean it. The seven teams behind the Oilers were all within five points, beginning with Anaheim, just one back.

Calgary won that night 3-2 in a shootout. Erik Cole had the only goal of the first period to give Edmonton a 1-0 lead. Jarome Iginla, converting a stunning Bobby Orr-like set-up from Cory Sarich, tied it in the second period. In the third, Ales Hemsky scored 1:46 in but with 1:05 remaining and Miikka Kiprusoff pulled for an extra skater, Matthew Lombardi snapped a shot through a screen that beat Dwayne Roloson just under the crossbar.

In the shootout, Todd Bertuzzi shot first and beat Roloson with a nifty one-handed backhand and that would be it. Sam Gagner, Robert Nilsson and Hemsky each failed to get a shot away on Miikka Kiprusoff.

After that game, Calgary went on to win won four of its next five to open up a 10-point gap on the Canucks as of Mar. 6.  But it would not be enough. A 7-11-0 finish while Vancouver went 12-5-2 over the final five weeks cost the Flames the division title and resulted in a 4-5 match-up with Chicago in round 1. That series was won 4-2 by the Blackhawks. Calgary missed the playoffs the next five seasons before finally returning to the post-season in 2014-15.

As for Edmonton, they lost just twice in regulation the next month going 6-2-4. With three weeks to go, they were in a playoff spot and had a four-point cushion to work with. But they lost eight of their final 11 to fritter that lead away and finish six points out. That's as close as they've finished lately and by a long shot. In the seven seasons since, they've missed the post-season by 33, 35, 21, 10 (lockout-shortened 48-game season), 14, 25 and 17 points respectively.


Where Are They Now?

While none of the players in uniform that night in 2009 are still with the team, one player on the roster still is. Mark Giordano was a member of the Flames but he did not play that night as he hurt his shoulder injury two nights earlier in a collision with Minnesota's Cal Clutterbuck. He would end up having season-ending surgery. Playing defence in his place was Jim Vandermeer.

Of the 40 players in uniform that night, only a handful are still in the league. For the Flames, Jarome Iginla (Col), Mike Cammalleri (NJ), Dion Phaneuf (Ott), Adam Pardy (Nsh) and back-up goaltender Curtis McElhinney (Tor) are still kicking around. 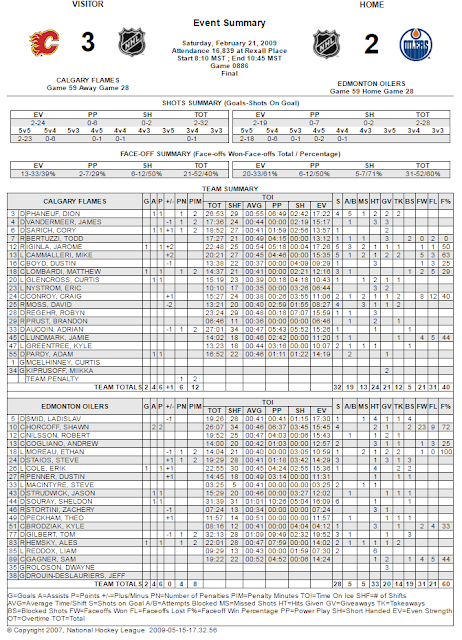 Once considered by many the best rivalry in the NHL, the Flames and Oilers met in the post-season five times in the span of nine years from 1983 to 1991. For me, I was age 13-21 during that time and it was an absolutely glorious time to be a hockey fan.

But tragically, there hasn't been a post-season Battle of Alberta since.

That last playoff game between these two sides was played at the Saddledome on April 16, 1991 and it is a memory that haunts longtime Flames fans. With the opening round series tied 3-3, Calgary opened up a commanding 3-0 lead, only to see the Oilers storm back with four unanswered to take their first lead. The Flames got the tying goal late in the third from Ronnie Stern but lost 5-4 in overtime on Esa Tikkanen's third goal of the night at 6:58 that gave Edmonton the dramatic series win. It was a heart-breaking, punch-to-the-gut setback for the home side.

As bitter as Flames fans likely still are, it's a game worth re-visiting via the brief highlight package below. If you're in your 20s or early 30s and have no recollection of it, just listen to the continual roar in the building that night. Man, what an atmosphere.

Could there be a Flames-Oilers meeting in the playoffs this season? That's asking a lot.

For that to happen in the first round, there's just the two scenarios of course. In one, Calgary or Edmonton would need to finish in top spot in the Pacific Division. That's a big ask. Just as unlikely is both teams finishing ahead of two California teams in order to meet in a 2-3 match-up.

While still a long shot, the odds are probably better of a second round match-up although that would require the dominos to fall just right.

It's incredibly sad to think that if you're under the age of 35, you have nothing but a vague, distant memory at best of watching a Flames-Oilers playoff game.

The oldest player on Calgary's roster today is Deryk Engelland, 34, who coincidentally was born in Edmonton. He would have been nine years old during that 1991 series. What do you remember from when you were that age? Probably not much.

The game has changed so much that the rivalry will never be what it was back in the 80s and early 90s where blood on the ice and jam-packed penalty boxes were a regular thing. But that doesn't mean it can't still be intense and compelling in its own way.

The Oilers with lots of young skill in Connor McDavid, Leon Draisaitl, Ryan Nugent-Hopkins and Jordan Eberle.  The Flames with much of the same in Johnny Gaudreau, Sam Bennett, Sean Monahan and Dougie Hamilton.

Is there less edge? Absolutely, but there's still plenty of snarl in the likes of Darnell Nurse, Milan Lucic, Matthew Tkachuk and Troy Brouwer.

As you're watching the game tonight, let your imagination wander to when these two franchises finally do meet once again because sooner or later, and hopefully sooner than later, it's going to happen and it will be fantastic.

Both teams are finally heading the right direction at the same time. Both have young cores that should make success sustainable for the next several years.