Chasing History: Monahan on Cusp of Being Youngest Flame to Score 100 Goals


It makes you wonder what all the fuss has been about.

Two more goals for Sean Monahan on Wednesday night in Calgary's mightily impressive 5-1 victory over the Minnesota Wild gives him a team-high 18 and has him on pace to finish the year with 28. That would be right in line with his production the last couple seasons in which he scored 31 and 27 respectively.

“When you play with good players and you get a lot of opportunity, sometimes good things happen," said Monahan. "Right now I’m getting some good looks."

The last three weeks in particular has seen a return of the Monahan of old. He's skating better, he's carrying the puck more assertively, he's shooting more and he's burying his chances.

With eight goals in his last nine games, Monahan is tied with John Tavares and Brad Marchand as the NHL's leading marksmen for the three-week period starting January 12.

"When you're not contributing or not playing your game, it can be frustrating," admitted Monahan. "But this is the NHL, there's no excuses and you have to find ways to get out of slumps and play better."

On this night, both of his goals came on the power play with Johnny Gaudreau and Troy Brouwer on his flanks each time.

It didn't take that trio long to strike. On Calgary's first man advantage halfway through the first period, Monahan buried a rebound past Devan Dubnyk. The eventual game-winner was assisted by Gaudreau and Brouwer. For the latter, it snapped a 10-game pointless skid.

"At this time of the year when you get on a man-advantage and you don’t get as many at this time, those are crucial and you need to find ways to put the puck in the back of the net and we did that tonight,” Monahan said.

In a new configuration that hasn't been tried since early in the season, that same combination was a line at five-on-five too. If all goes well for coach Glen Gulutzan, he'll be able to keep that trio together for the immediate future.

One thing that has been more noticeable is Monahan is shooting more. Way more. In the first 24 games of the season (through Calgary's 5-3 loss in Philadelphia on Nov. 27), in which he had only five goals, Monahan was averaging just 1.9 shots on goal per game. 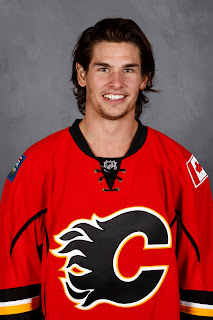 The next night in Brooklyn, Monahan suffered the indignity of being demoted to the fourth line to begin the game while rookie Mark Jankowski -- playing his first NHL game --  took over his spot between Brouwer and Kris Versteeg.

By the third period, the message apparently received, Monahan was back with his regular linemates and he scored the tying goal at 5:51. The game ended up a 2-1 overtime loss, but it would end up being the start of a real nice run for the club. Calgary went on to win its next six games and Monahan kept it going for even longer, piecing together a career-best 10-game point streak.

"I had a slow start to the season and it was frustrating and obviously, mentally, you think about it a lot," said Monahan, reflecting back. "Every day, if you have a tough game, it will take you until you play your next game. This is an everyday league where you have to come in and contribute, work hard, and find ways to be better. You just have to grow and learn from those types of things."

Going back to that night against the Islanders, Monahan has been averaging 2.9 shots on goal. During his current sizzling hot nine-game scoring binge, he's averaging 3.7 shots on goal.

"I listened to an interview with Eric Staal and he was answering some questions and he said it doesn't matter how many years you play in the league or what type of player you are, confidence is a big thing," said Gulutzan after Wednesday's win.  "I had a talk with Sean not too long ago and he said I'm better in the second half.

"He's gotten some good looks, he's gotten some goals. He's getting some confidence and I think that's the biggest difference. We're really trying to push that in our group right now. We hear the players talk about it all the time, we can't discount it as coaches."


Closing in on History

Up to 98 goals in 290 career games, Monahan leapfrogged Craig Conroy on the Flames all-time list on Wednesday -- and that coming in 217 fewer games than Calgary's assistant general manager played in the Flaming 'C'.

Monahan is two goals away from becoming the 27th player in franchise history (including Atlanta) and the 20th player in Calgary Flames team history to reach 100.

When he hits that milestone, assuming he does so before the end of the 2016-17 season -- and there's still 29 games to go, he will become the youngest player since the Flames entered the NHL in 1972 to reach the century mark.

"It's obviously pretty cool," said Monahan, who genuinely didn't realize until I told him post-game that he was so close to that milestone. "My first three years and being in my fourth year now, I've gotten a lot of opportunity and I've played with some great players obviously. Got to give a lot of credit to my linemates and the guys that I play with to help me get there."


One of These Things is Not like the Other

Go back to 2013-14, the season Monahan broke into the NHL, here are the league's 16 highest goal scorers over those four seasons. Included in parentheses is their current age:


Tied with 29-year-old James Neal for 17th place is Monahan. Remember, he's just 22 years old. The next youngest player on this list is Tyler Seguin, who is over 32 months older. Seguin was drafted three years before Monahan.

I understand given his young age why some people bristle at the thought of already referring to Monahan as an 'elite' centre in the NHL, but it's because of his age and what he's already accomplished that I'd suggest such a descriptor is completely fair game.

Nevertheless, what one can't argue is that judging by the list above, he's certainly hanging with 16 elite players.

Given the terrain just covered, it goes without saying that Monahan obviously stands out among his draft class too.

If you look back to that 2013 draft in which the Flames selected the former Ottawa 67 sixth overall, he is the leading goal scorer by far. While everyone keeps waiting for first overall pick Nathan MacKinnon to start cutting into his lead, instead he's extending it. With just 11 goals on the year, MacKinnon now trails Monahan by 28 in that category.

Go back one year to the 2012 draft class and Monahan has 15 more goals than Alex Galchenyuk, who is the top of that class.

Go back to 2011 and despite playing two less seasons than leader Gabriel Landeskog, he's only 11 goals behind him. Monahan would actually sit third on that list, two goals back of Brandon Saad..

Monahan signed a seven-year, $44.6 million deal with the Flames last summer. While there may have been nervousness the way the first few months went, he's going to be well worth the $6.375 annual cap hit if he can continue in his current form and why doubt him? He's done nothing but consistently put the puck in the back of the net since he entered the league.

If he continues to produce at his current pace and he remains in Calgary, he'll be bumping up against 300 goals by the time this contract ends.

When that contract does end on July 1, 2023, he'll still only be 28 years old. If the above list of the best goal scorers of the past four years is any indication, that will put him still be very much in his prime. It makes you wonder how high he can climb.

But 2023 is the least of anyone's worries right now, the focus is squarely on 2017 and helping Calgary try to make the playoffs this season.

Along the way, players he could/should pass on the all-time goals list include:

If Monahan can continue his scoring prowess and if as a duo, he and longtime linemate Gaudreau can find their mojo again, that bodes well for a Flames team that sits in a wild card spot with just over two months remaining.

A statement victory over the NHL's hottest team on Wednesday was certainly a step in the right direction. Securing a win or two on this very difficult three-game Eastern road trip with stops in New Jersey, New York City and Pittsburgh would also go a long way.

If the Flames do return home next Tuesday to their five-day CBA 'bye week' still sitting in the top eight in the Western Conference and the way Monahan is sniping right now, odds are good that packed somewhere in his luggage will be his souvenir 100th goal puck.

Start making some more room on the mantle, kid.