Rarities: Flames Pursuing Home Ice Advantage and/or a Playoff Match-up with the Oilers 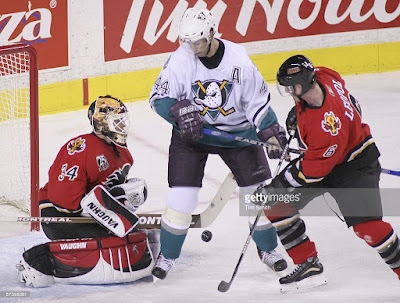 The memorable sequence began with feisty Darren McCarty barrelling into the Ducks zone and laying a heavy lick on defenceman Ruslan Salei in the corner, jarring the puck off his stick.

As the glass rattled, the Saddledome crowd went wild.

Daymond Langkow corralled the loose puck along the sideboards and sent it behind the net into the waiting soft hands of Kristian Huselius.

Set up behind the net like Wayne Gretzky in his prime, Huselius fakes once, then stick-handles, then stick-handles some more. Head up the whole time, he finally spots an open man and zips a pass in front where McCarty, carving his way through the slot, one-times the puck inside the goal post on Ilya Bryzgalov.

April 21, 2006, the one and only time in the last 20 years in which Calgary has opened the Stanley Cup playoffs at home, and the game ends dramatically 9:45 into overtime.

While 19,289 raucous fans went home happy on that night, that wouldn't be the case 12 days later. In a brutal loss fans are still healing from -- considering a second round match-up with the Edmonton Oilers was lying in wait -- Calgary laid an egg in game 7, getting outshot 31-22 and losing 3-0 to Anaheim to get eliminated.

Stunningly, especially for those old enough to remember all those years the provincial rivals were the powers of the Smythe Division, that was the only time since 1990-91 in which the Flames and Oilers have both made the playoffs in the same season.


Getting Back to Today

Fast forward 11 years and are we finally on the verge of getting that long awaited Battle of Alberta that we were denied that disappointing Wednesday night back on May 3, 2006?

It definitely could happen as we enter a compelling stretch run in which after Thursday's games, the Oilers and Flames are now tied for third in the Pacific Division with 78 points, two points back of Anaheim. Edmonton holds a game in hand.

Adding to the drama up north, of course, and this is not something anyone needs to be reminded of, 2005-06 when Edmonton ended up going all the way to the final before losing in seven games to the Carolina Hurricanes, was also the last time the Oilers made the playoffs.


Breaking Down the Remaining Schedule

So how do the remaining schedules for these three teams compare? Here's a breakdown:


Four games left with the Flames and Oilers is where the Ducks could pull away or be left behind. Beyond that, Anaheim would have the second easiest remaining schedule after Edmonton. Three opponents that the Ducks still have home-and-home series with St. Louis and Winnipeg. Know that the Blues and Jets will have a lot of fan support from Alberta for those games. Depending on the health of John Gibson, the three back-to-backs could also be a concern for coach Randy Carlyle.

The heavy home schedule should give Edmonton the edge. Although having split the first two games of an eight-game homestand, the next two opponents are tough ones with Pittsburgh and Montreal on the docket consecutively. A home-and-home with lowly Colorado later in March should be money in the bank. Beginning March 19, Edmonton begins a stretch in which seven of nine games are against California teams.


The advantage the Flames wield is their high number of regulation/overtime wins (ROW), which will give them the tie-breaker if they finish even in points with Anaheim or Edmonton. The difficult closing stretch of six straight against California teams has been well documented. Heading out East one more time is what differentiates the Flames schedule from Edmonton. A three-game trip in two weeks features difficult stops in Washington, Nashville and St. Louis.

Five weeks from today, the official version of the Stanley Cup playoffs will already be nicely underway. Between now and then -- the Flames playing every other day until the end of the season -- are the unofficial playoffs.

Drama, tension, angst, every game matters. Everything that's great about the post-season also applies to the stretch run.

Of course, that's only because Calgary has done a phenomenal job of scratching and clawing its way back into contention.

Since Nov. 15 when the Flames were 5-10-1 and dead last in the league with the worst winning percentage, Calgary has been the NHL's sixth best team, going 32-16-3.


Narrowing the scope, since Jan. 24 and that 5-1 shellacking in Montreal when the Flames were 24-24-3 and clinging to the final wild card spot (Los Angeles and Vancouver were both one point back with three games in hand), Calgary has been the NHL's best team, going 13-2-1.

The scenarios are plentiful for how this season ends for Calgary and Edmonton. They could both finish as high as second in the Pacific, or they could miss the playoffs altogether, or they could finish anywhere in between. Third in the division, either of the two wild card spots, all of those options are still in play.

As a result, the Flames could meet the Oilers in round one, round two, or even round three in the Western Conference final. Now wouldn't that be something.

Just imagine, one of them finishes in the second wild card and crosses over into the Central. The other stays in the Pacific. Both teams get past their first two opponents and voila, it's May, there's green grass and sunshine outside and there's a Battle of Alberta going on to determine which team represents the West in the Stanley Cup.

While obviously that's a huge stretch, the far more realistic possibility for Calgary and one that's very achievable is opening the post-season in front of a boisterous C of Red.

Should that happen and if you'll allow your imagination to run wild, you can even envision a winning goal very much like what unfolded 11 years ago.