Stability Breeds Success: Flames Have Won Seven in a Row While Icing an Identical Line-up

Life is good these days for Glen Gulutzan. His club riding a seven-game winning streak that suddenly has Calgary even in points with the Ducks, the first-year skipper has been on auto-pilot, rolling out the identical forward lines and D pairings game after game.


People, we're a Nashville-regulation-win-in-Anaheim-on-Tuesday away from Oilers-Flames sitting 2-3 in the Pacific. Oh man, make this happen.
— Darren Haynes (@DarrenWHaynes) March 6, 2017


The only hair out of place the last couple weeks was the opening 40 minutes of that wacky 6-5 overtime win in Nashville that started the streak. That night in the Calgary debut for Michael Stone, the 26-year-old former Coyote started on the third pairing with newly inked Matt Bartkowski, who had made his first Flames appearance the previous game.

But by the end of the second period, Stone had already flip-flopped spots with Deryk Engelland and moved up alongside TJ Brodie. From that point forward, it's been same old, same old. No need to be spitballing alternate line combinations on the back of napkins, just these 18 guys and in these exact seats.

Sunday afternoon's 5-2 triumph at the Saddledome over the New York Islanders must have been a coach's dream. All four lines in on the scoring with each contributing an even-strength goal. The Monahan line had two.

"It's a huge luxury," says Gulutzan when asked about the benefits of having four lines contributing. "One of the things we have in our room is everybody has a role. Everybody matters if you walk through that locker room. It's not just a slogan.

Dominant nearly every shift, it seems, what a goal they produced at 14:56 of the first period to touch off a firestorm of four goals in less than five minutes on the under-siege Thomas Greiss.

If you were casually watching the game, you may have thought Calgary was on a five-on-three power play the way that trio -- joined by defencemen Mark Giordano and Dougie Hamilton -- controlled the puck. Go back to the defensive zone face-off in which Backlund outdueled John Tavares and Calgary essentially had possession for 52 seconds.


How #Flames first goal would have looked in a summary if you weren't limited to two assists and duplicates were OK. pic.twitter.com/GQIPPzHECx
— Darren Haynes (@DarrenWHaynes) March 6, 2017

According to Dobber Hockey, the 3M line has been the fifth most productive unit this season at even-strength in terms of raw points:

The key thing to remember though is with the Backlund line, we're also talking about Calgary's primary shutdown line.

"We've had some pretty good lines here that offensively could score and create but I don't think since I've been here, there's been a line that takes the onus in both ends and dominates," says captain Mark Giordano. "They've really been our best line all year. Tough match-ups, tough assignments, but they create a lot because they play the right way."

Other than two games in mid-November when Tkachuk had a cut hand and Jan. 26 in Ottawa when they tried Frolik on the Gaudreau-Monahan line to try and get them kick-started, that line has been the team's backbone since Gulutzan first put them together on Oct. 24. When you've been together as a line for 57 games, it's no wonder they've established some strong chemistry.

The key move that has helped the remaining forwards slot appropriately onto the other lines is Micheal Ferland moving up to play his off-wing with Johnny Gaudreau and Sean Monahan. 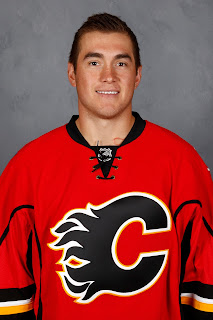 Their first time together as a line this year was also that night in Nashville and they enjoyed instant success as Ferland scored twice and Gaudreau broke out of a slump with four assists.

Showcasing his wicked shot, Ferland notched his 13th goal on Sunday, tying him with Gaudreau. He has lit the lamp eight times in his last 15 games.

Gulutzan says the decision to move the physical, 6-foot-2 winger onto that line was something they had been contemplating for a while.

"It was always something we had in our minds," says Gulutzan. "You try to build players up. He spent a lot of time on the fourth line and did a great job."


"Putting him there now and what he's bringing to that group. He doesn't need to be the skill-based guy, he needs to be Ferly and his attributes -- his skill, his toughness, his going to the net," Gulutzan said. "It's hard to play against him and that's what you get now from that line and it's helping."


Bottom Six Has Been a Better Six

With the top six settled, the Flames have been getting effective minutes from the fourth line too, albeit with limited expectations.

Where the greater focus has been is the third unit of Kris Versteeg, Sam Bennett and Troy Brouwer. While in general the results haven't been there as much as they would like, they've been better lately. Bennett, in particular, has been a lot more noticeable.

On Sunday, they were the last of the lines to get in on the action, scoring 6:58 into the third to restore a four-goal cushion at 5-1. As all three broke in on a three-on-one, a nice pass from Bennett was finished off neatly by Versteeg for his second goal in as many games.

"It's almost an internal competition with each line," says Versteeg. "Everyone knows what their job is so it's always nice when everybody contributes to a win."

He says the benefits are many when you keep lines together.

"You start to get chemistry and cohesiveness with everyone out there," says Versteeg, who is up to 12 goals. "It's nice to know where guys are on the ice and where they're going to be and understand tendencies and strengths of their game."

Since the trade deadline, the buzz has been around when newly acquired Curtis Lazar will make his debut. Well, it won't be anytime soon as long as the team stays injury-free and keeps playing like they are. 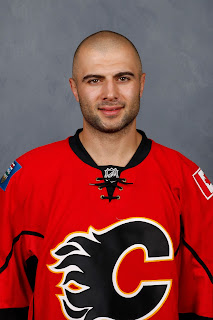 Soon, Lazar will know his popcorn peers Dennis Wideman and Freddie Hamilton better than his own parents.

"We have good depth, we really do throughout our line-up," says Giordano. "Our six 'D', our four lines. In this league, you need different lines to step up every night. We feel like we've gained some consistency here in the last little bit.

"It's nice every night to have different guys chipping in, having big nights, it feels good to come to the rink."

It's a sentiment Monahan echoes.

"When you're winning, the atmosphere is great," he says. "Right now, we're confident but we're not over confident. We know we still got a lot of work to do and we haven't proven anything."

What Gulutzan likes best is everybody is a part of it.

"What's going to take us far is when everybody feels like they're part of something bigger than themselves," he says.

They'll attempt to make it eight straight victories for the first time since November 2005 when former Flames forward Paul Byron leads the Montreal Canadiens into the Saddledome on Thursday.

As for what Calgary's line-up will look like that night, that part we already know.