State of the Roster: On Eve of July 1, Flames Needs Down to Perhaps Just One Piece


One player needed and $3 million to spend.

That's what I've got things whittled down to as Brad Treliving has been operating lately like he's got some serious plans for the Canada Day long weekend and is anxious to hit the highway.

A barrage of transactions by the general manager over the last couple weeks has the Calgary Flames 2017-18 roster rapidly coming into focus. That, plus a glimpse into the future.

On the eve of the NHL's annual July 1 free agent frenzy, here's a recap of the parade of players that have joined (or re-joined) the organization lately:

That's a lot of significant pieces in a short period of time.


Happy to be Back

Stone's decision to re-sign was the latest announcement and it was also one of the simplest decisions. For one, his wife is from Calgary and they spend their off-seasons in the city. Secondly, he knows the calibre of team Treliving is constructing.

"A goal right when I got traded here was to stay in Calgary and not only for the fact that we're close to family, but it's a really good hockey club," said Stone, who just turned 27 earlier in June. "That's something I haven't been part of a whole lot."

For Friday's announcement, Stone stopped by the Saddledome in person with his wife and adorable, wide-eyed nine-month old twins -- one boy and one girl -- both outfitted in red knitted Flames sweaters. 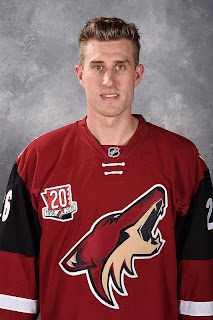 Stone says for himself, recalling when he first arrived in town last March, it is rejuvenating to be on a competitive team again. He added that it will be no different for his once-again teammate, the ultra competitive Mike Smith.

"When I got here, it felt like a new season, a fresh start, we were pushing for something," Stone says. "In Arizona, it was like let's get through the rest of the season.

"Not mailing it in, but you know you're out and there's a bunch of uncertainty. Coming here, you get a jolt of energy and it's exciting to come to the rink every day."

With the injury history for Travis Hamonic, who the last four seasons has missed 13, 11, 10 and 33 games, and with Calgary clearly determined to become a legitimate Stanley Cup contender, Stone's arrival gives the Flames tremendous depth on the back end. In addition to being a solid third pairing presence, he is also a guy as he demonstrated last season that can be elevated into the top-four in the event of an injury.

You need that type of depth if you view yourself as a contender and that security comes at a price. Stone's deal pays him an annual average value of $3.5 million over the next three seasons.

As for the type of player the GM still has remaining on his shopping list, coach Glen Gulutzan peeled back the curtain a little bit during a radio visit with Dean Molberg and Ryan Pinder on Sportsnet960 radio on Friday morning.

To summarize their conversation in case you missed it, Gulutzan hinted that the team is looking for a bottom-six winger, who is a right-hand shot and can take draws. Not necessarily a centre, but more so a winger who can take face-offs in certain situations, similar to what Troy Brouwer does in sometimes taking the draw when he's on his strong side.

With that information in mind, I set out to build the rest of the 23-man squad that would surround that one missing piece.

The website Cap Friendly is a phenomenal tool and I use it all the time. But at the same time, the presence of pending RFAs and players listed in the minors when they should be listed on the NHL roster (and sometimes vice versa) still leaves me scribbling out a bunch of additional math on the napkin beside me. In an attempt to crystallize the team's situation right up to the moment, I have taken a stab at building the Flames roster as it might look on Oct. 4 when Calgary visits Edmonton to open up the regular season.

This includes projections as to who will be on the team and who will not -- and my view likely varies from yours -- and don't get too hung up on the actual line combinations as we know those are likely to change. I also had to stickhandle around a handful of restricted free agents.

Determined to attach a dollar figure to each of them, highlighted in yellow is my guess at what their AAV may come in at this season. In some cases (e.g. Bennett, Ferland), I factored in big raises. In other instances (e.g. Lazar, Kulak), I basically assigned them their qualifying offer.

Other Candidates
(not factored into the payroll)

Other Candidates
(not factored into the payroll)

UFA Names to Watch For

Once you drill into it, there's aren't a whole lot of high-end names out there amongst the UFAs, who meet the description of what Calgary is looking for. At least not many big-name impact types.

Here are five names to consider:

Of course, there is always the trade route, which Treliving admits he's been more focused on this off-season. But Calgary has jettisoned a lot of draft picks out the exit already in assembling the current roster and their lottery ticket supply is getting awfully thin.

If they don't find the right deal either, being a few million under the salary cap isn't a terrible thing. It's incumbent on Treliving to not fear that spending burning a hole in his pocket. Save it for later. The Flames would then look to promote one of their prospects already in the system and knocking on the door (e.g. Spencer Foo, Mark Jankowski).

So are you ready for hockey to start up again? We may still be a few months out from the games beginning, but the roster is looking pretty darn close to ready.