Fresh Start: Poirier Focused on Future After Overcoming Two-Year Battle with the Bottle 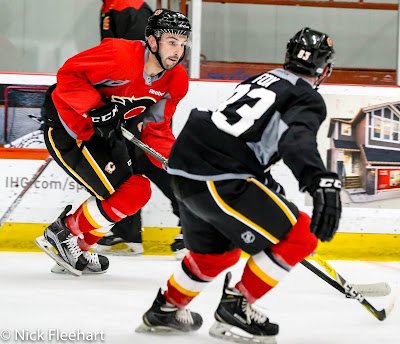 For two years Emile Poirier lived in denial. But it reached a point last February where he couldn't do it any more.

"Seeing my life where it was going, I needed a change," said Poirier on Wednesday at WinSport, talking publicly for the first time about his battle with alcoholism. "I've seen signs for the last two years and finally I admitted it to myself."

Playing for Stockton in the AHL at the time, his last game was Feb. 18. That night he was held off the scoresheet for the 13th consecutive game. With a healthy scratch included in that stretch as well, he had become a mere shell of the dynamic player that burst onto the AHL scene two seasons earlier and racked up 19 goals in 55 games as a rookie.

The person he reached out to was Flames general manager Brad Treliving.

"I called him for support, I needed help and he's been truly supportive through the process," said Poirier.

It wasn't an easy conversation.

"Pretty emotional," admits Treliving, recalling that moment. "He said, 'Listen, I've got to make some changes.' For us, it feels like a dark day but in a lot of ways, it's a great day because you recognize it.

"To go through that, it takes great strength to ask for help."


No Longer Was Hockey the Top Priority

What everyone also must recognize is alcohol addiction is an affliction that has implications that extend well beyond a 200x85 foot ice surface.

"I said to him, No. 1, forget about hockey," said Treliving. "He was facing a fight that was bigger than hockey so let's worry about that."

Shortly after, he was admitted into the NHL's treatment program in California where he remained in the care of professionals at that facility for a couple of months. You don't go there for a set period of time, you go there until they're satisfied that you're ready to leave. While you're there, you're off the grid. Nobody hears from you.

Fast forward to today, five months later, and Poirier is living in Calgary. He hopes this is all behind him, but as anyone who has been through a battle with sobriety will attest, it's not going to be easy.

"You have a supporting group around you that's going to support you every step of the way," said Treliving. "We'll worry about the hockey stuff later. This is just about Emile, the person."

A central figure helping Poirier along his path to recovery is former Flame Brian McGrattan. As has been well-documented over the years, he went through the same fight in his NHL playing days.

"I'm working with Brian McGrattan every day. He's awesome with me and he's helped me to go through this process," said Poirier, re-iterating more than once his gratitude for all the support he has received.

In developing a plan for how to move forward, Treliving involved McGrattan, hoping the 35-year-old would be willing to assist. Coming as no surprise, he was and the GM is appreciative of that support.

"(McGrattan) has jumped in with both feet," he said. "He's talked to Emile, he's had him over to his house for dinner. I think they talk daily. We've got a support system there for him.

As Poirier's goal total plummeted, falling from 19 to 12 in his sophomore season and then to just six last year, so did his stock as a prospect.

Ranked No. 2 behind Sam Bennett in my bi-annual prospect rankings in August 2015, he fell to 4th, then 10th, and last February in my most recent update, he was barely clinging to 20th. It was confounding that such a talented player could fall off the radar so drastically and so quickly. We're talking about a guy who scored 43 goals and 87 points in 63 games in his final year of major junior. Skilled, fast and with some snarl too, there was so much to like about his game.

Turns out, that sharp decline in his performance on the ice was mirroring his struggles off it.

As Treliving knows very well, having played professional hockey himself for many years, taking action isn't always an easy thing to do in an environment where you're always around 'the guys'. With the territory comes a certain level of bravado.

"Some people look at it as a weakness. I think that's a crock of shit. It shows great strength for anybody to say hey, whatever it is, I have this and I want some help," he said. "He's gotten it and sitting with him in the office the other day, it's like he's seeing the world for the first time. Those are all things you're just really proud of."


Trying to Recapture His Old Form 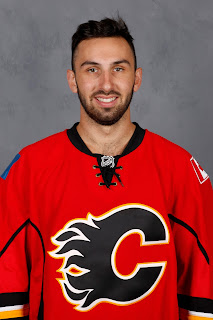 "Today, this is the best he's looked on the ice in two years. There's just a big weight off his shoulders."

Smiling, the GM recalls his first impression of Poirier, which came after he had only been on the job a handful of days.

"Abbotsford was playing Grand Rapids and he had just come from Gatineau (QMJHL) and this guy was the best player on the ice for both teams," he said. "Then he had his shoulder surgery and then he missed training camp and then his first game back in Adirondack, he was the best player on both teams. He had two goals, he hit five posts and we're like, we have a player here -- but it's steadily gone down."

With his life back on track, Treliving hopes the 22-year-old can also get his career back on the rails and get back to that same level, if not higher.

"He's a good hockey player, he's a talent and he's also not 38 years old," said Treliving. "This is a young man and I think he's determined to give it a push and we'll see where it goes, but he's given himself a chance."

For Poirier, it's now about getting back to the player he once was, because that player, taken 22nd in the 2013 draft, looked a sure-fire NHLer.

"Now that I'm fully focused on hockey, I just have to play my game," said the Montreal native. "I'm a good hockey player, I can do my thing and nothing's in the way now. So I'll just do my job and we'll see what happens." 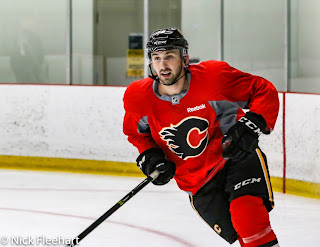 Make no mistake. The fight isn't over. In fact, it's just beginning.

But surrounded by a solid support system in Calgary -- McGrattan, Flames strength and conditioning coach Ryan van Asten, Poirier's girlfriend -- back together after breaking up -- has also moved to the city, the many players always milling around town including Micheal Ferland, another player who has been through a similar fight and whom he speaks with regularly, he is set up to succeed.

"It's an everyday thing and there will be tough days along the way but as long as you have that support group, it's going to help you as best that they can," said Treliving. "Hockey is never going to work if the life's not in order. The life's now in order so now the hockey has a chance to work."

With one year remaining on his entry-level contract and jobs available on the NHL roster on right wing, it's once again go-time for Poirier, only this time No. 28 is truly ready.

Awesome. Fans hope that is a feeling that never goes away, regardless of how his hockey career turns out. Sometimes there are more important things in life.

"You cross your fingers and you really, really root for him," said Treliving.