Jaromir Jagr: Don't Ask Why, Only Why Not

By today's standards, that would make for a pretty decent NHL career.

To put those totals in some form of relatable context, only four players in Flames team history have scored more often in the regular season (Iginla 525, Fleury 364, Nieuwendyk 314, Roberts 257) and nobody has scored that many playoff goals for Calgary (Mullen 35).

But those aren't career totals. Not even close.

That's merely the numbers Jaromir Jagr had already piled up on his NHL resume as of June 20, 1996, the day Sam Bennett was born.

Twenty-one years and 546 regular season goals later, Flames fans are downright giddy at the rumoured possibility that maybe, just maybe, the 45-year-old Czech legend could end up skating this season on the same line as Bennett.

Now wouldn't that be something.

There are several factors fuelling the speculation that Calgary could be a potential landing spot for the unrestricted free agent, a scenario that has the mercury rising right across Flames nation these days:

1. Jagr Wants to Play in the NHL Still


Add in the fact that he's just 57 games away from passing Gordie Howe to become the all-time leader in games played, you know Jagr is driven to find NHL employment, even if he has to accept a pay cut from the $4 million salary he earned in 2016-17.

Flames coach Glen Gulutzan noted earlier in the summer that right wing was a position Calgary was looking to strengthen in the off-season. The team's vehement pursuit of veteran Patrick Sharp -- only to lose out in the bidding to Chicago -- corroborated that belief.

Now Jagr shoots left so he doesn't necessarily tick off all the same boxes but there are a bunch of other qualities the veteran would bring to the line-up and dressing room.


3. Calgary Can Afford Him

The byproduct of some very stingy dealings this off-season by general manager Brad Treliving -- e.g. Getting Arizona to retain $1.4 million of Smith's salary, getting Carolina to cover $1.375 million of Lack's freight, Calgary does have money to spend.

Based on my projected roster that I've been maintaining here, if you pencil Bennett in for $2.5 million and RFA Brett Kulak for $660,000, Calgary has around $3.2 million to spend on a forward (amount varies depending on who else makes the team). But that's based on 14 forwards. Gulutzan likes to keep things tight and if he rolls with just 13 skaters up front and a 22-man roster, now Treliving has in the vicinity of $3.8 million to spend.

Where there's a question mark and it's sparked much debate over the summer is who plays right wing on the third line alongside Bennett and Kris Versteeg. It could be Troy Brouwer, but it need not be. It could be Curtis Lazar but it doesn't have to be. So it most certainly could be Jagr.


5. There is a Connection to Gulutzan

In the lockout-shortened 2012-13 season, Jagr scored 14 goals in 34 games for Gulutzan before Dallas traded him to Boston late in the season for a draft pick and two prospects.

That goals-per-game clip with the Stars of 0.41 is the best GPG he's posted over the last 11 years. So while their time together was brief, Jagr has familiarity with Gulutzan and presumably some good memories.

Meanwhile, does Gulutzan have a thing for his former players? Well, you decide. See Alex Chiasson, the interest Calgary had in Sharp, the signing last year of Matt Bartkowski, the acquisition of Eddie Lack.


What's Left in the Tank

How much more does Jagr have left to give? The stories about his intense workout regimen are legendary but we're still talking about a middle-aged man that is the age of someone more likely to be spotted checking out Kirkland brand jeans at Costco than possessing the puck in the offensive zone. And this is in a league that every year seems to get younger.

So it's absolutely a fair question to ask. 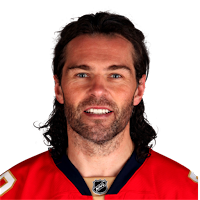 Shane Doan, over four-and-a-half years younger, was the next oldest forward in the league last year and his career might be done. Jagr has nearly five-and-a-half years on Jarome Iginla, who is also still looking for work.

After notching 27 goals two years ago, last year Jagr scored only 16 times, which was the worst output in his 23 NHL seasons.

Versteeg and Ferland fell one shy of 16. Tkachuk had just 13 and that was the same number for Bennett and Brouwer. Chiasson, whose departure is what has opened up a spot on the right side, had a dozen.

Also not to be overlooked, Jagr played the full 82 games in 2016-17 and averaged 17 minutes of ice time. That's a lot of hockey so clearly the old man still has some game.

There also doesn't appear to be much evidence over his last two seasons with Florida to support the notion that in his advanced age, he slows down as the season wears on:


If you really strain your eyes in looking for it, you can find a drop off in Jagr's possession stats in the second half but his production remained the same.

Of the 11 forward spots I consider locked up, six of the players are age 25 or younger. Four of the top six are in that 25-or-under club. I wouldn't expect Jagr to play in the top six but what a presence -- and chockful of war stories -- for a young group to have in the locker room.

And imagine the thrills for young Czech players like David Rittich and Daniel Pribyl to have Jagr around in training camp. Heck, even Frolik, who wears No. 67 as a tribute to Jagr, and hails from the same hometown.

If you fancy yourself a playoff team and after the off-season moves made, surely the Flames do, then this is the ideal guy to have around for that time of year. Sure, there are some playoff miles on the odometer of Versteeg, Brouwer and Frolik, but a little more of that wouldn't hurt.

With just three playoff appearances in his last 10 years, you know he's driven to get another kick at the Stanley Cup.

The one thing they say with older players are the hands are the one part that never seem to age. With Gaudreau, Monahan, Backlund, Tkachuk and Bennett as the only should-be locks up front on the power play (I'm assuming Versteeg is once again on the point), there is PP ice time to be had and you can bet he'd bury several Gaudreau saucer passes over the course of the season.

I mean Ferland is a nice option also, but given a choice, you'd take Jagr every time.

Let's remember that this is still a business and in a city where the economy isn't the best, Jagr is a guy that fans would show up to watch. Thirty of the Flames 41 games last year were not sellouts.

Add Jagr to the mix as some icing to top off a decent off-season and the buzz around town will be huge.

The counter argument to signing Jagr is it is taking away an opportunity for a prospect to make the team. It's true too. But whose spot would he be taking?

On the right side, Spencer Foo is perhaps the most notable name but having just turned pro, there's almost an expectation that he will need some time in the AHL. Emile Poirier is an unknown after his struggles of the ice the last two seasons. Pribyl is a mystery due to all his injuries and Matthew Phillips will be going back to junior. If Jagr forces Freddie Hamilton to the minors, fans will live with that. Same sentiment applies to Garnet Hathaway.

The top forward prospect and player most likely to make the team up front is Mark Jankowski but he's strictly a centre so Jagr's presence doesn't directly impede him. Sure, there could be a trickle-down effect if Lazar gets bumped to the fourth line but there are ways around that if Jankowski earns a spot on the team. Not yet waiver eligible, a return to the AHL for a bit more development time anyway is also a very possible outcome for Jankowski.

There have been eight stops in Jagr's hall-of-fame NHL career and not once in his 1,711 games has he played for a Canadian team. In fact, his only time spent in the Western Conference were those 34 games under Gulutzan in 2013.

So while it's easy to rationalize why it makes sense for the Flames to sign Jagr, it's not that simple. There also has to be a desire by Jagr to sign in Calgary.

For the same reasons a convincing case can be made that he could help this team, he would be a useful addition for many other teams too.

But entering day 54 of free agency and with European leagues starting up soon, the urgency to secure a deal with someone -- anyone -- is surely getting pretty high. One would think Jagr's list of desirable NHL markets must increase with every passing day while at the same time, his salary expectations are likely decreasing.

If he's up for a cold Canadian winter -- and that might be a legit pause for thought for the snowbird-aged Jagr -- what better team to play for than the city that is home to one of the most unique player fan clubs in all of sports -- the Travelling Jagrs.


If you're Treliving, if you have the opportunity to sign Jagr for somewhere in the vicinity of $2.5 million plus bonuses, why not? Worst case scenario, he ends up a fourth line player and at that, he could still be the guy making the least on that line. On a one-year term? There's been far worse gambles.

When it comes to sports writers, the adage is we only cheer for one thing -- the story.

Well, 36 goals behind Howe for second on the goals list, 57 games away from being the NHL's all-time games-played leader (if he stayed healthy, the new mark would be set in Boston on Feb. 13). What a great story, indeed, if No. 68 ends up playing in front of the 'C' of Red.