A Draw to Remember: Jankowski on the Art of the Face-off and his Moment of Glory

Mark Jankowski took over 1,000 face-offs last season, but there's one in particular that sticks out. To this day, he remembers it with the level of detail as if it happened last night, not 10 months ago.

To paint the scene, it was a Monday night in late November at the Barclays Center in Brooklyn, New York. It was Jankowski's only NHL appearance.

It was the last stop on a six-game eastern road trip for the Flames. Desperately trying to turn the season around after a disastrous start, the trip started well with wins in three of the first four games. But after a loss the previous night in Philadelphia, Calgary was in jeopardy of returning home a disappointing 3-3-0. Not bad, but given the enormous hole they were trying to climb out of, not good enough.

The score was 1-1 halfway through the third period when at the end of a shift, Jankowski's line with Hunter Shinkaruk and Micheal Ferland got caught out for an icing. This was a golden opportunity for the Islanders to try and take the lead and sure enough, coach Jack Capuano sent the John Tavares line over the boards.

"That's a big part of my game, I have to win those faceoffs," says Jankowski. "You're up against one of the best players in the league, John Tavares. It comes down to the mental part, you do whatever you can to win that draw -- and I got him."

In the first and only time he stared down Tavares at the dot, he won it clean too, allowing Calgary to comfortably exit the zone and get that badly-needed line change. The Flames went on to pick up one point that night in a 2-1 overtime loss. That result was the precursor to a six-game winning streak that got them back into playoff contention.

"Big moment for me, for sure," says Jankowski.

It was also a big moment for Flames development coach Ray Edwards, who was in attendance that night to watch his 22-year-old student make his NHL debut.

"I was jumping out my chair," gushes Edwards with a big smile, proudly recalling that sequence with the same vivid detail as his protege. "For me, that's a moment. It was great and that's the kind of stuff you hope should be part of his DNA moving forward."

Jankowski would only play one more shift that night. Three days later, he was returned to Stockton.


A Continuing Work in Progress

In his quest to make it to the NHL for good the next time, not just a mid-season cameo, face-offs is a big part of his personal development plan set out by the team. It's so significant that last year, Edwards says they broke down face-offs into separate components. Strength is one area. There's studying opponents. He has an actual percentage goal, especially in the defensive zone.

"Another example is watching your own tactics. How are you winning, how are you losing," explains Edwards. "With video, we can show him, look at this, what are you doing here? You're not ready. Why isn't your winger ready? That's your responsibility to have him ready. 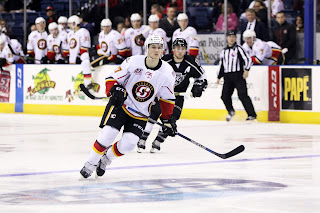 "It's not just him, it's making sure everyone knows what the faceoff is. We have a million different faceoff looks so he's in charge, he has to make sure everybody knows and if someone doesn't execute, it's his fault."

What makes Jankowski the ideal student is his ears are always open. He listens, intently, and he applies what he learns.

"He's a competitive guy. A lot of people may not see that with him, but when you challenge him, he takes it to heart," says Edwards.

Stockton coach Ryan Huska, who works with Edwards on executing the development plans, had similar things to say about the 2012 first rounder.

"He gets mad at you when you get after him on certain things," says Huska. "(At practice) I often drop pucks on faceoffs and you kind of know what a player is up to. Now he's trying to win every draw but at the same time, he's making sure his stick is coming hard to give me a little bang too, along the way.

"That's what we love about him, he's got that fire. If you challenge him in a certain way, he wants to show you, OK, I'll win all these faceoffs and at the same time, I'll make it hard on you. He's that type of guy. He wants to be the best and that's a great thing for him and it's a great sign for us and our organization."

Key for Jankowski is using his size, now listed at an imposing 6-foot-5 and 210 pounds.

"When you're a younger guy, facing off against men who are a lot stronger, a lot more mature, they have an advantage," says Huska. "For us, Mike Angelidis was a big, heavy and older guy. He was good for Mark. It forced Mark to dig in a little bit more on the draws and be prepared to get his nose dirty."

Inevitably there's a learning curve when you enter a league as a centre. As an example, Sean Monahan has seen his face-off percentage gradually climb in each of his four NHL seasons. The last two seasons he's finished above 50 percent.

It takes a while to get to know the league as well as your opponents.

"I didn't start great on faceoffs down in the AHL," admits Jankowski. "Just getting to know the different players and also, the different linesmen as well. That's a big thing that a lot of people don't really take into account."


Rapport with the Stripes

Jankowski says different linesman drop the puck differently, so that's one aspect of it, but more so it's about getting on their good side and staying there -- think friends with on-ice benefits.

"If you build a rapport with them by being nice and talking to them, maybe you can cheat a little bit more," he says. "A lot of veteran guys and coaches, management, they've all said that same thing and I just try to soak things like that up and it's helped."

It's also not that difficult to do considering that toiling in the west coast outpost that is the Pacific Division, you get the same officials over and over.

Today, face-offs remain a work in progress. But the operative word is "work". Jankowski is willing to listen, learn, apply what he's learned, and keep on working at it.

"There were stretches (early in the year) where he was low 40s, and we would push him harder and he would get to 45, 47, and then he'd creep his way up," says Huska, about Jankowski's face-off percentage, which he said was in the low 50s by season end.

"That's one area of his game where we saw a lot of improvement in and it was because he worked at it. If there's an area that you challenge him with, he wants to make sure he's better at it."

Next time you watch him play live, take a look at Jankowski on the draw, how he prepares himself, his face-off routine. The bend of his knees, the twirl of his stick, you see him get low. The steely-eyed stare may be hard to see but you know it's there.

"We had a sports psychologist in Providence and he always said, have a routine," says Jankowski. "For centres, for the face-off, when you go in, have something so that so when that clicks, it's OK, this is where it's time to zone in.

"It's second nature now, but I always twirl my stick, then get ready. That's when I lock in and say alright, time to win a faceoff."

And no doubt, Edwards will once again jump out of his seat.