Oh Canada: Smith/Hamonic Rejuvenated and Grateful for Fresh Start North of the Border

Psst. There isn't another song.

It's OK to put your helmets back on.

You'll have to excuse Mike Smith and Travis Hamonic on Monday night if they're a little slow to react after George Canyon finishes doing his thing.

After all, for the last 15 years for Smith and last seven years for Hamonic, "stand on guard for thee" has always been followed by "oh, say can you see".

Welcome back to Canada, fellas, where the beer is cold, the winters are colder, and 'Eat, sleep, breathe hockey' isn't just a t-shirt, it's our way of life.

"Everyone's been super welcoming," says Hamonic, who grew up in St. Malo, Manitoba.  "Whether it's neighbours, people in Sobeys, gas stations, it shows how much the Flames mean to the city, how excited everybody is."

The last time Hamonic played in a game that didn't include Star Spangled Banner was April 23, 2010. Co-incidentally, it was also at the Saddledome. It was game 5 of the WHL's Eastern Conference final. That night, his Brandon Wheat Kings season ended with a 6-1 loss to the Calgary Hitmen.

"It's all part of playing in a Canadian market. I don't think you can beat it, especially growing up in Western Canada myself, where else would you want to be playing?" asked Hamonic, rhetorically. "Those are things that come with the territory and I think as a player you understand that you're going to be a face of the community."


A Decade and a Half for Smith

Smith's last home game north of the border was with Sudbury in the OHL in March 2002.

"I'm excited about the opportunity to be on a winning team and to be on a Canadian team," said Smith, the native of Kingston, Ontario. "As a Canadian boy growing up, I wasn't necessarily a Flames fan, but I definitely followed all the Canadian teams, and I know I'm a big Flames fan now!" 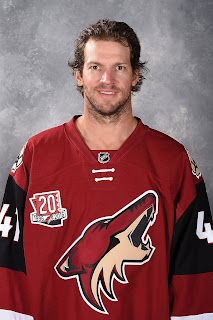 You and many others, Mike. The Flames fan base is vast, knowledgeable, but also very passionate. As a warning, they can be especially harsh on goaltenders in particular.

"It's exciting to be a part of a Canadian team that's expected to do well," Smith says. "There's pressure that goes along with that but that pressure is why you play the game and why you want to be in big games and on a winning team. I'm really pumped about it."

He says he'll be ready for when the heat comes. The "red" in C of Red is not just a reflection of the many home sweaters worn in the crowd, sometimes it also refers to the colour of furious fans' faces after a bad goal is allowed.

"Oh, I'm sure there will be moments when they're not liking what I'm doing, probably yelling at me to get back in my net, but I've heard it all," says Smith with a chuckle.


Fresh Start for Both

For both players, while returning to Canada is great, it's also about playing somewhere different. You sense things had gotten stale for both at their last stops and understandably so.

After a run to the conference final in 2012 in his first year with the Coyotes, Arizona hasn't made the playoffs since. Over the last five winters, only Buffalo has won fewer games.

The Islanders are the only team that Hamonic, 27, has ever known. Drafted in the second round in 2008, the same defence-heavy draft (e.g. Four of the top five picks were blueliners) in which TJ Brodie went in the fourth round, he has made the post-season only three times, making it to the second round just once. 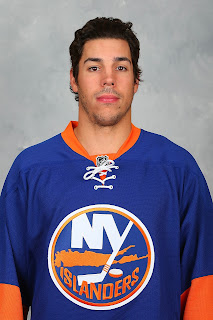 Smith, 35, used the word "rejuvenated" to describe how he feels in his new area code. Hamonic went with "grateful".

"I'm an older guy but coming to a new team with the excitement around the whole organization is real, exciting for myself," Smith says. "I hope I can be a big part of pushing this organization the right direction."

That same sentiment is echoed by Hamonic.

"When the trade happened, we were beyond excited for numerous reasons," Hamonic explains. "Playing in a Canadian market. Playing in a city like this is something that I'm really excited for the challenge, and truthfully, I'm grateful.

"Not every player gets to play in market like this and I'm sure winning in a market like this, there can't be anything better so that's what I'm here to do so and try to help."

Brad Treliving says a change of scenery can re-charge players' batteries and give them a boost.

"Change and newness always gives you a little juice," says the Flames GM. "There's a little bit of nervousness and what not, but I know both are excited. I talked to both a lot over the summer. There's a freshness to it. There's an excitement. They're very eager to get going."

Both players are crucial to Calgary's success.

Entering the season as the undisputed No. 1 goaltender, the Flames need Smith to deliver reliable, consistent goaltending. It's something they been searching for since Miikka Kiprusoff retired in 2013. Good in spurts isn't good enough, they got that last year from Brian Elliott.

"I've been around long enough to know what to expect," says Smith. "Hopefully it will be a great year and the excitement around this city will stay high and we'll all enjoy making a playoff push."

Hamonic has been airlifted in to the second pairing to play alongside Brodie and be the final piece to what the Flames hope will be a top-four that will be amongst the NHL's elite.

"As a player, everyone wants that. You want to have those expectations of pressure. That really is what brings the best out of you as a person and as a player," says Hamonic. "We've certainly got some good defencemen here. I've said it in the past. Some of the guys on this defensive core are some of the best in the league in my opinion and I stand by that."

Starting Wednesday, October 4 in Edmonton, after just one anthem, it all gets going for real.

"There's expectation here to do well. As an older player, that's all you can ask for. You want to be on a winning team, a winning franchise, it's exciting to be a part of a Canadian team that's expected to do well," says Smith.

Back home on the Saturday for game 2, Hamonic's home-province Winnipeg Jets come calling.

"I look forward to playing in front of a Canadian market crowd and a great city like Calgary," Hamonic says.

And that home crowd looks forward to cheering you on too. But just know that the folks in Sobeys, next time you're grocery shopping, won't mince words if you're not playing well. They won't be any happier at the gas station.

As they say, careful what you wish for.