Do you believe in miracles?!

In Mike Smith's spectacular 43-save shutout Monday night in Calgary's 2-0 win over the Ducks at Honda Center (shutout No. 34 of his career fittingly enough, remember that number), he gave fans much to think about and get excited about.

After all, the last time the Flames won a regular season game in Anaheim was Jan. 19, 2004. Back then, they were called the Mighty Ducks of Anaheim. That was also the only time Calgary had won in that building this century, the last win prior to that came in January 1999.

Exactly four months after that most recent win, Calgary defeated the San Jose Sharks 3-1 in game 6 of the Western Conference final to advance to the Stanley Cup final.

While they went on to lose in the final in seven games to the Tampa Bay Lightning, that magical run that gave birth to the Red Mile was a reminder of just how far a team can go if they get consistently great goaltending.

That year, of course, there was also a new goalie that had just arrived on the scene in Calgary, who put the Flames on his back and led them to within one win -- or within one coach's challenge video review, had such existed -- of hoisting the NHL's ultimate prize.

His name, of course, was Miikka Kiprusoff.

For his part in the Flames success, Kiprusoff finished fourth in Hart Trophy voting that season for league's most valuable player and was runner-up to Martin Brodeur for the Vezina as top goaltender.

His first of nine seasons with Calgary, the Finn was also the last time the Flames truly had a No. 1 goaltender. By No. 1, I'm talking about a non-debatable, no 1a/1b type of arrangement, a true, bona fide starter, who gets the tap on the shoulder four out of every five games and delivers the type of consistent and reliable performance that gives the team a chance to win each and every night.

After Kiprusoff's team-high 38 starts that season, a number limited by a six-week stint on injured reserve due to a sprained knee suffered in late December, he quickly took over as the league's workhorse.


From Darryl Sutter to Jim Playfair to Mike Keenan to Brent Sutter to Bob Hartley, the guy standing behind the Flames bench changed multiple times, but that carousel did not extend to the goal crease as over that period, it was all Kiprusoff, all the time.

One of the great trivia questions for Flames fans to kick around while out at the pub and enjoying a pint and some chicken wings is to name the other 11 goaltenders that got starts for Calgary during Kiprusoff's tenure with the team. Can you? (Spoiler alert, answer ahead)


This is relevant information because early indications are -- and full disclaimer attached, I fully realize it's only been three games -- that the Flames might, just might have found themselves a true No. 1 goaltender for the first time since Kiprusoff retired in 2013.

The club thought they had one when they acquired Karri Ramo, and Jonas Hiller, and Brian Elliott, but it didn't turn out to be the case. They hoped home-grown draft pick Joni Ortio would develop into one, but that didn't work out either. Over the last four seasons, Elliott's 45 starts last year was the most by any one goaltender:


Who's going well? Who's hot? Who's rested? Those were always the questions as none of the goalies that paraded through town were able to grab that No. 1 job and run with it.


Smith is an Established Starter

There is not any hoping this year that Smith can be a No. 1, they know he can be that guy. He established that during his time playing under Flames GM Brad Treliving in Arizona. Three of his six seasons with the Coyotes, he started 60-plus games. Four times, he started 55-plus games. Injuries were the only reason he didn't reach those same totals in his other two seasons. 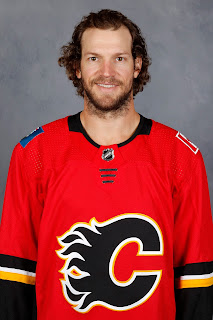 In his three starts, Smith has stopped 110 of 115 shots for a .957 save percentage. He has an impressive 1.68 goals-against average. Oh, and it gets better. At even-strength, his save percentage climbs to .967 with just three goals allowed on 92 shots.

Nobody in their right mind should expect that type of performance to continue, he's going to have some off nights and he's going to need some nights off. That's the nature of the position.

But, if he can provide steady goaltending and give the 18 skaters in front of him the confidence on a nightly basis that he is going to keep them in the game -- that the bad goal against will be rare, not common -- Calgary has the type of talent surrounding him both on the blueline and up front to be able to ride that a long way.

Smith's 43 stops on Monday night was the most stops in a shutout since the Flames franchise relocated to Calgary in 1980.

It wasn't the most in franchise history though. Atlanta Flames great Dan Bouchard had a 46-save shutout at Detroit on December 13, 1972. Bouchard also had a 45-save blanking of the Maple Leafs in Toronto on April 2, 1975.

But after that on the franchise list comes Smith's effort on a Thanksgiving evening that was truly a performance for fans to be thankful for.

If you're curious, it wasn't Smith's best shutout ever. A by-product of playing on some pretty poor Arizona teams over the years, getting peppered is nothing new for the 35-year-old and he has turned in a bunch of gems.


Mike Smith - Most Saves in a Shutout:

The other thing that I'll point out is that the  scorer of the winning goal that night back in January 2004 was Martin Gelinas, set-up by Craig Conroy and Chuck Kobasew.

That was a sign of things to come in that post-season for Gelinas, who famously scored the series-winning goal in each of the first three rounds and was the guy in the middle of the controversial non-goal in game six at home.

Fast-forward 13 years and author of the winning goal on Monday night was none other than Mr. Clutch himself, Sean Monahan, who sniped his 20th career game-winning goal.

Having shown a penchant to score in the big moments so far in his young career -- be it in the third period of games, or in overtime -- Monahan could very well turn out to be this year's Gelinas.

So omens, superstitions, it may seem like a bunch of malarkey, but don't tell that to the Flames, who tapped into that exact thing on Monday. Showing the extremes a sports team will go to in order to end a curse, they provided a locker room stall for Jobu, the voodoo doll from the movie Major League.

With a little help from Jobu from Major League, the #Flames have snapped the skid in Anaheim! pic.twitter.com/TBESUWXarM
— Calgary Flames (@NHLFlames) October 10, 2017

There's a long, long way to gos till, but the first impression from Smith is expect him to be a fixture in net. Should he continue to play even remotely as good as he has this first week, expect Calgary to be a fixture in the top three in the Pacific Division too.

What a new and different feeling it would be for this team to enter the post-season brimming with confidence in their goaltending. Dare to dream, folks, dare to dream.

As Flames general manager Brad Treliving has said before, NHL games almost always come down to the best goalie wins. It sure looks like Smith is going to give Calgary a fighting chance to get the two points in what could end up being upwards of 60-plus games. That should carry this team a long way.

Speaking of omens, do you know when the movie Major League was released into theatres?

Our introduction to Jobu happened on April 7, 1989. If that month and year sound familiar, that just happened to be two days after the Flames 1989 Stanley Cup run began. I don't need to tell you how that one ended.

Let that little bit of trivia percolate for a little bit.