Breaking the Persona: Hathaway Showing Maybe There's More There Than Most Thought

In Hollywood, actors get typecast all the time. Based on the type of role they usually play, eventually that role is all anyone ever expects them to play and they get pigeon-holed into having certain characteristics.

It can be a tough persona to break.

Same thing applies in the NHL. 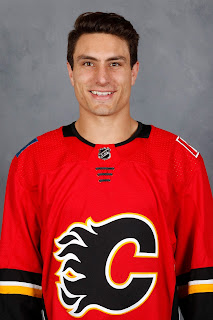 There are five words that over the last couple years have become permanently attached to Garnet Hathaway and it can be career-limiting:

We know what he is.

Pain-in-the-ass to play against? Absolutely.

The latter, often a dagger to one's NHL aspirations, is a label you earn when you're an undrafted 26-year-old player who in a half-season's worth of NHL service has scored only one goal.


Making the Most of His Chance

But after three games filling in admirably, if not impressively, for Jaromir Jagr on the Flames third line, now I'm starting to wonder.

Do we really know what Hathaway is?

It's only been a week. I'm not suggesting anyone get out the eraser quite yet. But based on his play this week alongside Mark Jankowski and Sam Bennett against the Leafs, Canadiens and Canucks, I'm also not prepared to laminate his current label either.

The Flames picked up five of six points the past three games with the native of Kennebunkport, Maine, instrumental in the two wins -- both of them being third period comebacks.

Where in the past, Hathaway would have been mostly stapled to the bench alongside his fourth line linemates as the team rolled the top nine in a bid to get back in the game, this week Hathaway found himself at the epicenter of all the important goals.


Three points in two games. All on critical game-tying or game-winning goals. All coming in the third period.

Exhibit A - Scores tying goal vs. Montreal at 7:49 of the third period

Inside the Montreal end, Hathaway steps inside of Alex Galchenyuk to intercept a puck shot up the side-boards by David Schlemko. Hathaway gets the puck back to Brett Kulak at the blueline. Kulak's shot misses the net, but the carom off the end boards is retrieved by Bennett, who drags it out front for a quick shot. In the ensuing scramble, Hathaway barges his way to the top of the crease and is able to jab the loose puck past a sprawled Carey Price before being wrestled to the ice by Galchenyuk. Waved off initially, it ends up counting to tie it 2-2 when coach Glen Gulutzan successfully challenged the initial ruling of goaltender interference.

Exhibit B - Primary assist on Tkachuk's tying goal vs. Vancouver at 11:34 of the third period


Hathaway races to the side-boards to intercept Ben Hutton's attempted bank pass to Markus Granlund. He quickly glances over his right shoulder to see where his teammates are then after quickly settling the puck on his stick, Hathaway zips a backhander into the slot where Matthew Tkachuk corrals it, goes to his backhand and sends a shot into the top corner while falling.

Exhibit C - Assist on Bennett's winning goal vs. Vancouver at 18:50 of the third period

Ten seconds of intense pressure begins with Hathaway's dangerous chance from 10 feet out off a cross-ice pass from Jankowski. Anders Nilsson stopped the initial shot, but unable to control the rebound, the puck bounces around the front of the net where it eventually bounds off the skate of Hathaway to Bennett out front, who misses the crowded net on his forehand.

After Jankowski -- from behind the net -- chips it into the opposite corner, Hathaway gets good body position to outmuscle Michael Del Zotto for a 50-50 puck. In the ensuing two-on-two board battle, the puck squirts out to Bennett who curls off the sideboards, bowls his way into the slot and fires a backhand past Nilsson for the game-winner.


Maybe There's Something More There

This recent body of work has the voice in the back of my head whispering maybe, just maybe there's something more there with this player.

"We played Garnet Hathaway after training camp in our first game in Edmonton, but we had some roster issues, obviously, and he went down," said the Flames coach.

"We told him to go down and play hard and what he did was play extremely hard. He had 11 goals and was in the top 10 in the American League in scoring. We wanted to get him back up here."

If comedic actor and longtime star of The Office, Steve Carrel, can eventually re-invent himself by taking on a series of dramatic roles, who is to say it's not too late for Hathaway to turn himself into a serviceable third liner.

It's not like Carrel suddenly became a Shakespearian actor. For Hathaway, we're not talking about elevating him into the top-six, but can he bump up one spot on the depth chart and play in the top-nine?

Well, so far so good. Nine shots over these last three games. Being around the action isn't new for Hathaway, but spending so much time around the opposition net is. He deserves credit for the third line not missing a beat when he stepped in for the injured Jaromir Jagr.

Bennett, Jankowski and Jagr were going pretty good when the 45-year-old Czech went down with that nagging lower-body injury he's been battling. Hathaway has slipped seamlessly into that spot and kept that trio rolling, despite the absence of the NHL's second leading scorer of all-time.


Continued to Improve in the Minors

While he hasn't until now been able to produce offence in the NHL, he's enjoyed plenty of success in the AHL, his points-per-game increasing as he accumulated more and more experience.

In his second year, he averaged just under a half-point per game with 8 goals and 21 points in 44 games. That year he also spent 14 games with the Flames.

Last year with the Heat, he was averaging two-thirds of a point per game with 8 goals and 20 points in 31 games. That earned him his longest stint yet in the NHL getting into 26 games with Calgary.

This year, he was averaging more than a point-per-game with 11 goals and 19 points in 28 games when he was jettisoned to Calgary.

With much of his time in the minors the last two years being spent with Jankowski as his centre, one also can't underestimate the impact that has had. Chemistry can be a powerful thing, regardless of where it is hatched -- at the Saddledome or at the Stockton Arena.

"The chemistry that him and Janko had down there, it's a nice little fit up here," said Gulutzan.


Should Have Been Drafted

The other thing to keep in mind is this isn't a guy that has come from out of nowhere.

In his draft year in 2010, Hathaway was ranked No. 110 among North American skaters by NHL Central Scouting.

That was higher than teammate Micheal Ferland (No. 146) and also higher than Ferland's Brandon Wheat Kings teammate and now Ottawa Senators' scoring star Mark Stone (No. 119), yet Hathaway went undrafted while Ferland and Stone were selected in the fifth and sixth rounds respectively.

As his story goes, Hathaway went off to Brown University for his full four years, but the Flames continued to keep their eye on him, eventually signing him to a one-year minor league contract.

After his impactful rookie season in the minors, he turned that into an NHL contract and next up on his wish list is a permanent NHL role.

It takes a long time to overcome first impressions and Hathaway will need to keep playing at the level he's at if he hopes to remain part of the top-nine.

But has he earned a spot in the top 12? Hard to argue that given what the team has gotten, or more so not gotten from the carousel of other players used in that role.

Even if that ends up being where Hathaway lands and that's still probably his career path at this point, he is showing right now that he can be a guy that in a pinch, can bump up in the line-up and play more important minutes and take on a bigger role.

That versatility will only further help him in his NHL career.