Watch and Learn: For the Flames, What Has Happened in Vegas, Shouldn't Stay in Vegas

"You can observe a lot by just watching."

It's one of many quirky sayings -- aka Berra-isms -- attributed to New York Yankee great Yogi Berra, who certainly had a way with words during his storied, hall-of-fame career.

But while it sounds silly on the surface, the spirit of what he meant is quite profound. Look around in life, take in what are others are doing and how they're doing it, and you can really learn a lot.

Case in point being the wonderful-to-watch Vegas Golden Knights, who are tied 2-2 with the San Jose Sharks in their Stanley Cup playoffs second round series.

Coming on the heels of a four-game sweep of the Los Angeles Kings, the six playoff wins for Vegas are already one more than Calgary has amassed over the past nine seasons.

In a fitting finish in game 3 on Monday, it was William Karlsson authoring the overtime magic with a top-shelf laser as he darted down the wing.

The 25-year-old Swede and former Columbus Blue Jacket has been the poster child for this collection of depth players turned Cup contenders who have captured the hearts and minds of hockey fans everywhere with their high-octane style of play.

Most Goals - Regular Season and Playoffs Combined (through May 2)


Led offensively by Karlsson's rise from obscurity, Vegas has been the No. 1 story all season. In shattering expansion season records from every other first-year franchise in every other sport, the NHL's newest team went a remarkable 51-24-7 in the regular season to run away with top spot in the Pacific Division.

They've kept it going in the playoffs where if not for a goaltender interference call in overtime of game 2, they could have a commanding 3-1 series lead right now. As it is, they still head back to T-Mobile Arena for game 5 on Friday with home-ice advantage in what's now a best-of-three.

While Calgary is already three weeks and one coaching change into what will be a painfully long off-season, the expansion darlings from Nevada have improved to 5-to-1 odds to win the Stanley Cup. Check Pinnacle Sports for all playoff odds.

It begs the question, how are they doing it and what has Calgary's front office learned?


Perspective on the Honeymoon in Vegas

I asked general manager Brad Treliving and new head coach Bill Peters about the blueprint that's been laid out in the desert and what their takeaway has been. 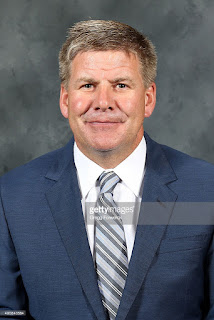 "To me, (assistant GM) Kelly McCrimmon and (GM) George McPhee have done a great job in the beginning. Their selections through the expansion draft were outstanding," says Peters. "They had a plan, they executed a plan and they're a four-line team that plays with unbelievable pace in both directions, with and without the puck.

"They play their players and the players in the bottom half of their line-up are responsible players, who don't give up much. Credit to them for drafting to an identity and now with Turk (Gerard Gallant), making them play to that identity."

The first thing that grabs your attention when you watch them play is how fast they play. It's relentless as their four lines come at you wave after wave. Four lines travelling at four variations of fast: super fast, blinding fast, light speed and hyperspace.

"You look at Vegas and it's not a unique style of play. It's the modern game. It's speed and it's attack," explained Treliving.


Don't be Too Quick to Judge

The Flames GM says another lesson to be learned is what can happen when you give guys an opportunity. Karlsson averaged less than 14 minutes in ice time with Columbus over the last two seasons and got virtually no power play time. The result was a lackluster 15 goals in 162 games.

This year, he sniped 43 in the regular season while averaging closer to 19 minutes. His average power play ice time has also jumped from 0:14 per night with the Blue Jackets to 2:24 with the Golden Knights.

"Ultimately it shows you that when people are given an opportunity in areas that over the course of their career -- whether it be at the amateur level early in their careers -- they have shown that they have a certain skill set, it's amazing what can be accomplished," Treliving said.

What player on your favourite team just needs an opportunity?
— Darren Haynes (@DarrenWHaynes) May 1, 2018

"Sometimes we all get locked into certain guys that have played a certain role for a certain period of time and sometimes there's a hesitancy to provide those opportunities. These are all guys who at one point in their careers were good players."

Now Karlsson is an extreme example and his ridiculously high 23.4 shooting percentage this season is certainly worth noting as that figure is not repeatable, but this is clearly a skilled guy. His speed, his hands, his shot -- all have been on display. Whether he was miscast, misused or simply not yet ready in Columbus, he has blossomed this season and his days of single-digit goals appear to be well behind him.

It makes you ponder who could bust out in Calgary if given a legit chance to play with skilled players in the top six. Who could be the Flames' version of Karlsson?

The first name that springs to mind is 2014 fourth overall pick Sam Bennett, who thus far in his career has been stapled to the bottom half of the forward group. But there are others too. While the circumstances are different as they spent most of last season in the minors, you also wonder if prospects Andrew Mangiapane or Spencer Foo could make a splash offensively if given an extended opportunity to play with the likes of Johnny Gaudreau, Sean Monahan and Matthew Tkachuk. Both have scored plenty at other levels.

The usage of Mangiapane in his 10 NHL games last season was a source of immense frustration for fans. The club's leading scorer in the American Hockey League was deployed mostly on the fourth line in Calgary and was kept far away from the power play, despite it's well-chronicled struggles. The result was no points and an average of less than nine minutes of ice time.

The other observation Treliving points out about Vegas is the team they've built and by that, he's referring to both on and off the ice.

"There's a real togetherness on that team and I think mix and chemistry is more important than people give it credit for," he says.

"It also shows what can happen when you get on a roll. That team has gotten on a roll and again, they're the poster child for today's modern game. It's quick, it's get it, move it, chase it and play with speed and I don't think our league is getting any slower anytime soon."

You get the impression that a quick game, or at least a quicker game, is how Peters would like Calgary to play.

"It's fun when you have the puck. It's a lot of work when you're in the d-zone and you're defending and you're getting wore out, that's heavy lifting. We have to do the heavy lifting quick and then get through the neutral zone and into the offensive zone where we'll have fun and express our skill and let our top-end talent show."

That approach along with the edge in his personality -- summed up politely as "direct and honest" -- is part of why Treliving aggressively courted the native of Three Hills, Alberta, when his window opened to leave the Carolina Hurricanes after four years.

Peters' preparedness, his modern thinking of the game and that sternness that they hope will coax more out of the players were all qualities Treliving observed first-hand two years ago at the World Championships when he and McPhee, as co-GMs, hired Peters to coach Team Canada. That team ended up winning gold.

"It's a short window so you have to be careful. It's different than an 82-game grind, but you get to know the individual, what he's all about, you really get to peel back the curtain," said Treliving. "A lot of times people will say well this guy's a great coach, that guy's a great coach. Until you're around them and see it every day, you don't know."

Peters he does know and very well after being joined at the hip during their time two springs ago in Russia.

"I sat in on every meeting when he dealt with players one on one. I sat there when he dealt with a team setting. Every situation. Just his philosophy, then getting to know him as an individual. When you leave there, although you're around each other for a month, you feel like it's been a full season. I left there with what I felt was a great knowledge of the guy."

Interestingly, during their time together two years ago, which was the first time they worked with each other, Treliving was looking for a new head coach to replace the fired Bob Hartley. But Peters wasn't a candidate as he was coming off a solid second season in Carolina and still had one year remaining on his contract.

As it turns out, unbeknownst to either of them at the time, Peters' seven weeks with Hockey Canada essentially ended up being a comprehensive first interview with the GM, one that included an extensive work experience component.

"In that setting, you see everything. You get a sense of what he believes in the game and how he teaches it and there was a lot of time away from the rink. We were in Russia, there wasn't a whole lot of sight-seeing going on so we were hot-stoving it a lot of nights. You really got a sense of who he was."

If a quicker and harder to play against Flames team can return to the post-season in 2018-19, all will be good. Perhaps a year from now, it will be other teams looking at Calgary and asking the question, how did they turn it around?

If not, another Berra-ism comes to mind. It will be like deja vu all over again.