Trying to Crack the A Team: Don't Pity the Foo

In June 2017 when highly-touted NCAA free agent Spencer Foo chose to sign with the Flames, he did so after evaluating several NHL teams and deciding Calgary was the best fit for him.

From the outside, it was a logical choice too. Here was a talented offensive player, 23 years old at the time, who shoots right and plays right wing. He was exactly what the organization badly needed. On the NHL roster, only Troy Brouwer, Curtis Lazar, Garnet Hathaway and Freddie Hamilton met that description and bottom-six forwards at best, they combined for just 17 goals in 2016-17.

Fast forward a year and the landscape has changed considerably.

Brouwer, Lazar and Hathaway are still around, plus Elias Lindholm, Derek Ryan and Austin Czarnik have all been added. Right-shooting forwards is no longer the barren wasteland it once was. Let’s not forget the July 2 signing of James Neal either, who shoots left, but plays right wing and is penciled into that spot on the No. 1 line.

So where does that leave Foo, who after spending most of his first pro season in the American Hockey League, scored twice in four games in a late-season call-up to the Flames?


Eyes on the Prize

To his credit, when asked about it after Sunday’s development camp scrimmage, he shrugs off the influx of forwards added to the depth chart with a steely-eyed resolve. Forget 13th or 14th forward, this guy remains fully focused on being a difference-maker. 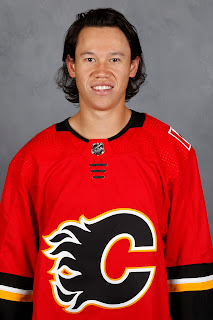 "Really, nothing changes for me. It's all the same,” said the well-spoken Foo, who comes across confident, yet not cocky. “I don't want to be a bubble guy on this team, I don't want to be a guy who's up and down. I want to be able to establish myself as an NHL player, who can make an impact.”

In other words, if you’re constantly looking over your shoulder, you can lose track of what’s right in front of you.

“If you're worried about other guys coming in, your mindset isn't in the right place,” said the Edmonton native. “I'm worried about coming in and earning my spot over anybody else."

Foo says his late season call-up to Calgary will help him prepare for 2018-19 and what he hopes will be a breakthrough season.

“That was huge for me. Throughout the year when you're playing in the American League, and all throughout your life, you don't really know how it's going to be like when you finally make the jump to the NHL,” Foo explains.

“To be able to come in and be able to play with some great players and score a couple goals, it's pretty special for me and it gives me a lot of confidence."


Anxious to Get Going

When rookies report to camp in early September, Foo says he will be ready.

"It was great just to get experience and dip your foot in the water,” he said. “It feels good, gives you a lot of confidence going into the off-season. Now I really know what it takes."

Foo’s final stat line with Stockton was 20 goals and 39 points in 62 games in Stockton. That included 15 points (8 goals, 7 assists) over his final 18 games.

"It's a huge jump,” said Foo about his first season in Stockton after three years at Union College. “It's not always necessarily faster, but there are a lot of subtleties in the pro game that are different. Guys are just so experienced and know what to do with the puck. That makes a big difference. Then you make another jump to the NHL and it amplifies it even more."

Making the NHL roster for October 3 isn’t going to be easy. Foo will basically have to steal someone’s job. But don’t let the smile fool you, know that he’s fully prepared to do whatever it takes.

By the way, have you liked Flames From 80 Feet on Facebook yet? Do so now! It's another way to be alerted to new stories I've written, other articles from my colleagues that I've enjoyed and I'll occasionally use that space to chime in on the news of the day.